Why Can’t Riga Just Replace a Plaque on the Wall?

Posted on 14 November 2016 by Defending History

◊
I am a tour guide in Latvia, Lithuania and Estonia. Whenever I take tourists through  Riga’s fabled Old Town, we together pass, on the way from Town Hall Square to the still-functioning synagogue, the address Peldu Street 15, right on the corner of Peldu and Kungu. There is a high school building and a twenty-four-hour parking lot guarded all the time. And right in front of us, on the outside wall of Peldu 15, there is the half-destroyed plaque for the Righteous Among the Nations Anna Alma Pole.

During the Second World War Anna Alma Pole was a housewife in her fifties in the building, at Peldu 15. One of her Jewish neighbors before the war was Isaac Vange, who was friends with her younger son. Starting in the summer of 1943, when the Germans began the liquidation of the Riga Ghetto, Isaac brought a group of Jewish escapees from the ghetto to Anna Alma to ask for refuge. She risked her life to shelter them in the basement of this house, Peldu 15, for about a year, and with the help of her daughter, to provide them with food and essentials. Besides Isaac Vange she rescued the Lipmanovich brothers, their sister, the doctor Judith Yudelovich who was a top specialist on tuberculosis, as well as Sergey Gurevich, Yosl Grundman and another Riga Jew called Abel.

In August 1944, one of the neighbors denounced Anna Alma Pole. The Nazi police raided the house. She and all of them were arrested, tortured and killed. Anna Alma Pole is a recognized Righteous Among the Nations.

Some fifty-four years later, on the initiative of Alexi Sheinin, owner of the publishing house “Petite,” a memorial plaque was affixed to the outside wall of Peldu 15. But a few years later it was destroyed by unknown vandals. The memorial plaque was restored in 2003 by its designer, the noted artist Solomon Axelrod. 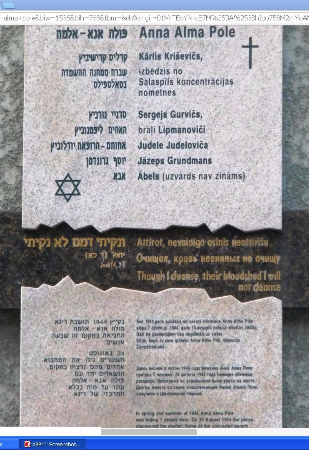 Then, in the summer of 2011, unknown hooligans destroyed the lower part of the board with the text in Latvian, Russian, Hebrew and English. The English text reads: “In spring and summer of 1944 Anna Alma Pole hid seven people here. On 24 August 1944 the police discovered the shelter. Some of the concealed people were killed on the spot. Others, together with their rescuer Anna Alma Pole were tortured to death in the central prison.”

The upper part of the plaques with the names of Anna Alma Pole and the Ghetto prisoners she tried to save is preserved. The rest is gone and the overall condition for the last five and half years shows a frightening lack of respect and care. 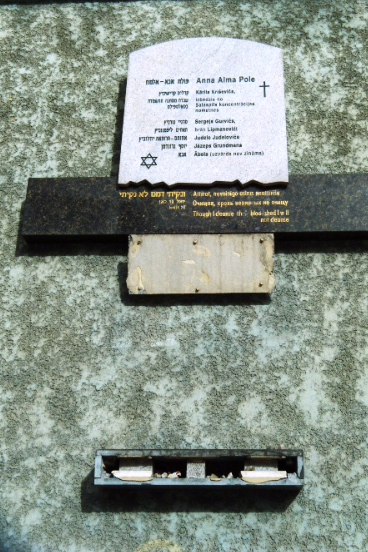 As a tour guide, and a patriotic citizen of Latvia, I continue to ask some questions. Did the police genuinely try to find and arrest the vandals of either the first or second destruction of the plaque? This occurred in the Old Town, which is full of security cameras. Why has nobody, for five years, made any attempt to restore this plaque to this amazing woman who is such a credit to wartime Latvia? Does the owner of the building not care about the state of this sign and how it reflects on his building? And what about the Jewish community?

This building is located in the heart of Riga’s Old Town, some 300 meters from the nation’s parliament and the presidential palace. And smack in front of the plaque is the security-guard post for the parking lot. So I went and asked the guard how it was that he did not notice that right in front of his guard post, someone broke the plaque of someone so noble in Latvia, and commemorating other victims of the Nazi regime. He said that his only interest is parked cars.

Aleksandrs Feigmanis, who holds masters and doctoral degrees, is a Riga-based historical and family tour guide and genealogist in Latvia, Lithuania, Belarus, and Ukraine.

This entry was posted in Aleksandrs Feigmanis, Latvia, News & Views, Opinion, Politics of Memory. Bookmark the permalink.
↑ Return to Top