Posted on 28 November 2011 by Defending History

Ukrainska pravda, Dzerkalo tyzhnia, Zaxid.net, Den, Gazeta.ua, Glavred, and UNIAN, which all devote either special sections or many publications to such historical issues as newly uncovered World War II era mass graves, refused to publish a Ukrainian-language version of the following Open Democracy article on the misrepresentation of the Nazi mass execution of Jews in Volodymyr-Volynskyi as a Soviet massacre of Poles. The Ukrainian service of Radio Liberty published a Ukrainian version of my article in the op-ed section of their website. However, the article was removed from their website without any explanation a few hours after its online publication. My email to the director and the webmaster of the Ukrainian service of the Radio Liberty got no response. In contrast, a report claiming that the victims uncovered in Volodymyr-Volynskyi were Poles executed by the Soviet secret police remains on the website of this radio station funded by the US government.

Such historical issues as Stalin’s policies of mass murder and activities of the Organization of Ukrainian Nationalists (OUN) and the Ukrainian Insurgent Army (UPA), attract a great deal of the media coverage in contemporary Ukraine. However, the media reporting on these issues is often politically biased, and it even involves a self-imposed censorship concerning the involvement of the OUN and the UPA in Nazi genocide.

A case in point is coverage of a mass grave that was recently exhumed in the town of Volodymyr-Volynskyi in Western Ukraine. Many Ukrainian newspapers, magazines, radio stations, and TV channels have claimed, in spite of overwhelming evidence to the contrary, that this was a Soviet massacre of Poles. 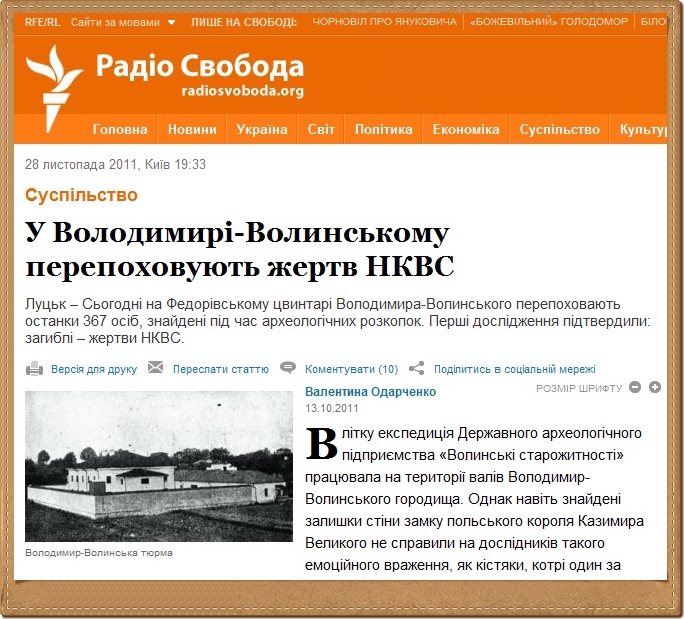 By contrast, not a single publication or TV report even mentioned a mass execution of Jews by the Nazis and the OUN-led police in Volodymyr-Volynskyi as the most likely version supported by the evidence.

A World War II era mass grave was recently found in western Ukraine, pointing to a horrific massacre. Yet with German bullet casings unearthed and evidence pointing to Nazi / pro-Nazi forces as the perpetrators, Ivan Katchanovski asks why the dominant theory to emerge is of Soviets murdering Poles.

A mass grave containing the remains of at least several hundred (and possibly thousands) of people has been uncovered in the small western Ukrainian town of Volodymyr-Volynskyi, near the border with Poland. This discovery is hardly surprising since the lands of Ukraine, dubbed by Yale history professor Timothy Snyder as the “bloodlands”, are full of mass graves dating back to World War II. These lands endured a Nazi genocide that claimed about seven million lives, and a Soviet genocide and mass murder of several million peasants, “class enemies” and political prisoners.

What is surprising, however, is the rush to judgment and near unanimity of Polish and Ukrainian politicians, experts, and journalists. The conclusion they have all reached is that that the unearthed remains are of Poles murdered by the Soviet secret police (NKVD), even though the uncovered evidence and other sources indicate that these are Jewish victims of the Nazi genocide. 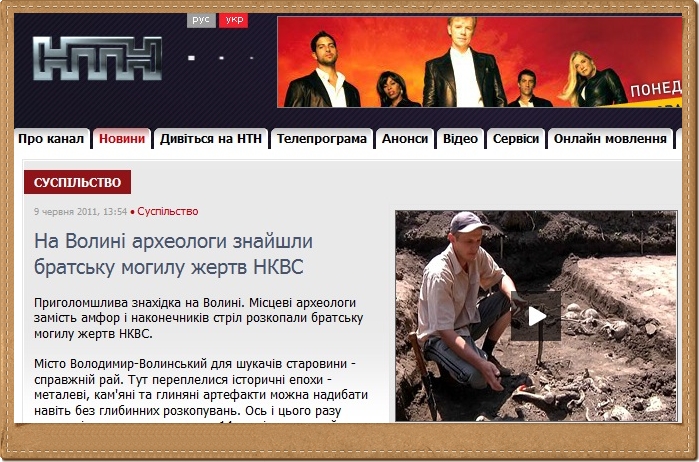 Although both Polish and Ukrainian officials acknowledged recently that the Jewish victims of the Nazi executions might be among people buried there, they continued to advance the idea of  “Polish victims of the NKVD” as the main theory. On 13 October 2011, Ukrainian and Polish officials and priests oversaw the reburial of the remains of 367 people at a local cemetery with a sign referring to victims of Soviet mass terror.

A Soviet or Nazi massacre?

The finding of remains of hundreds people in the mass grave, which was only partly exhumed and which likely contains many more remains, has already been dubbed the “Volyn Katyn”. This is in reference to a hugely controversial mass murder in Katyn forest, Russia, of Polish POWs by the Soviet NKVD in 1940, which the Soviets misrepresented as a Nazi massacre.

The Volyn massacre case can actually best be described as Katyn In Reverse. Its similarity with the Katyn massacre lies in the misrepresentation of historical facts. It is claimed the Volodymyr-Volynskyi massacre was committed by the Soviet NKVD, yet the evidence indicates the opposite: that it was committed by the Nazis and the local Ukrainian police. The evidence, which includes spent German bullet casings, previous studies, eyewitness testimonies, archival documents, and analysis of Nazi and Soviet methods of mass murder would seem to indicate that the victims most likely were Jewish civilians, executed in 1941 by the Nazis on the grounds of the Volodymyr-Volynskyi prison.

Little time passed before the “NKVD massacre of Poles” became the dominant explanation following discovery of the mass graves in Volodymyr-Volynskyi in spring of 2011. Polish and Ukrainian television reports and media publications spoke with near-unanimity about “victims of the NKVD”. In contrast, there was only one TV report and newspaper article that challenged the NKVD version.

One Polish expert, Professor Andrzej Kola, who initially suggested that the victims were Poles executed by the Soviet NKVD, has since admitted in an interview after the reburial that they were in all probability Jews executed by the Nazis. 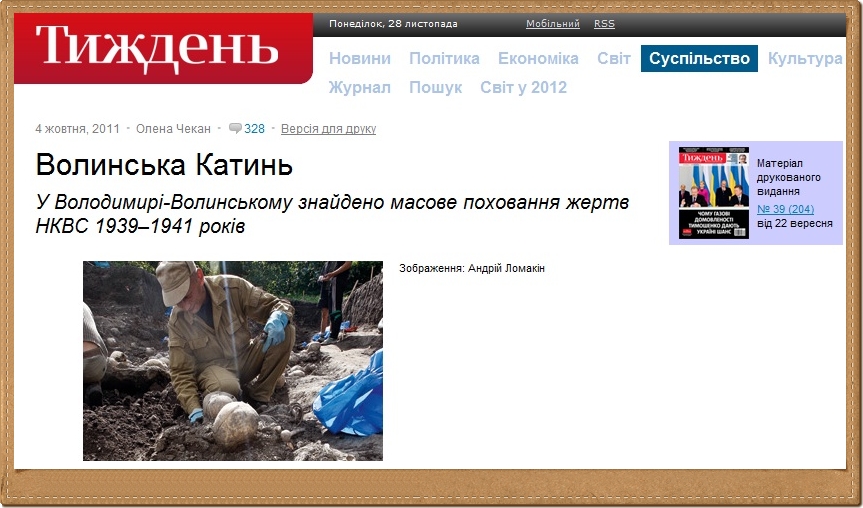 German bullets: it must have been the Soviets…

The consensus theory put forward was that the victims were Polish POWs, and the prime evidence offered in support for this lay in two Polish police badges, found not in the mass grave but in its vicinity. Yet the theory is inconsistent with NKVD documents which show quite clearly that Polish POWs were transferred from the Volodymyr-Volynskyi prison to other prisons and murdered there. The two Polish policemen were most likely executed by the Soviet secret police at the time of the Katyn massacre along with thousands of other Polish officers and policemen in the Kalinin and Ostashkiv camps.

The badges, however, continue to be used as evidence of a Polish execution, even though remains of women, small children, and elderly uncovered in the summer and the fall of 2011 indicate that most victims were clearly civilians.

Neither is the Polish POW theory consistent with evidence from the only other known large-scale execution by the NKVD in the Volodymyr-Volynskyi prison in 1941. That massacre is discussed in many studies, archival documents, and eyewitness reports of its survivors. They describe how at least 36 out of about 300 prisoners — mostly local Ukrainians — were executed by the retreating NKVD when Soviet forces abandoned the frontline town on the second day of the war, 23 June 1941. Their remains were discovered, identified, and reburied at a local cemetery immediately after the arrival of German troops.

By contrast, the newly found victims in Volodymyr-Volynskyi were clearly executed in large groups, and almost no remains of clothes or footwear were found. They included many small children, women, and elderly. Both of these are consistent with Nazi executions and not Soviet executions. There are, moreover, eyewitness reports from Jewish survivors about Nazi executions carried out with the assistance of the Ukrainian police in the area of the Volodymyr-Volynskyi prison in 1941 and 1942.

Quite remarkably, it is claimed that the discovery of not Soviet but 9-mm German bullet casings from 1941 Walther P38 pistols is “evidence” of the NKVD being the perpetrator of the massacre. The German army and the security police adopted this type of handgun in large numbers from 1940 onwards. The Soviet NKVD used other types of guns and other caliber bullets, specifically during its murder of the prisoners in Volodymyr-Volynskyi. The use of German pistols and bullets in the Katyn massacre by the NKVD executioners was largely an exception. Those weapons were, moreover, of a different make and caliber, and produced before the Nazis came to power in 1933.

The Organization of Ukrainian Nationalists and the Ukrainian Insurgent Army are celebrated as national heroes in western Ukraine. Their involvement in Nazi genocide is ignored or downplayed. Similarly, the Katyn massacre is used as a political symbol in post-communist Poland and its relations with Russia.

An old Russian rifle found at Volodymyr-Volynskyi has also been cited as evidence of the NKVD role. Such logic ignores the documented fact that the Ukrainian police, which assisted in Nazi mass executions, was often armed with such trophy rifles. There are plenty of eyewitness reports that suggest the local Ukrainian police helped to carry out massacres of Jews in Volodymyr-Volynskyi. Indeed, archival documents that I personally examined during my recent visit to the region show that the commander of the police at the time (Summer 1941) was installed by the local administration controlled by the Organization of Ukrainian Nationalists (OUN).

It is, therefore, simply a matter of political convenience for Western Ukraine and Poland to claim a mass murder of Poles by the Soviet NKVD in Volodymyr-Volynskyi, and ignore or downplay the much clearer evidence of the massacre of Jews and other civilians by the Nazis and the local police. Even after the defeat of pro-OUN President Yushchenko, the Organization of Ukrainian Nationalists and the Ukrainian Insurgent Army continue to be celebrated as national heroes in Western Ukraine. The OUN and UPA leaders are commemorated by monuments and street names, while their involvement in the Nazi genocide is ignored or downplayed. Similarly, Katyn is used as a political weapon in post-communist Poland and its relations with Russia.

Incidentally, the small town of Volodymyr-Volynskyi already has a site that is much more similar to the real Katyn than the mass grave recently uncovered. This site is a former POW camp, and contains the remains of Soviet officers — mostly Russian, Ukrainian, and Jewish — who were executed or killed during the Nazi occupation. The number killed exceeds the number of the imprisoned Polish officers executed at Katyn and other POW camps in Soviet Russia and Soviet Ukraine. In contrast to Katyn, however, the mass murder of POWs in the Volodymyr-Volynskyi camp is almost completely unknown in the West, because of the Cold War and various political factors.

It is a great irony that Volodymyr-Volynskyi will come to be remembered for a Katyn-style misrepresentation of the history — and of the real perpetrators  — of a major massacre.

This article is published by Ivan Katchanovski, and openDemocracy.net under a Creative Commons licence. You may republish it with attribution for non-commercial purposes following the CC guidelines. For other queries about reuse, click here. Some articles on this site are published under different terms. No images on the site or in articles may be re-used without permission unless specifically licensed under Creative Commons.

Ivan Katchanovski teaches at the School of Political Studies at the University of Ottawa.

This entry was posted in History, Opinion, Politics of Memory, Ukraine. Bookmark the permalink.
↑ Return to Top