The recently launched website JosephLevinson.com provides renewed opportunities for acquiring his two major books that are available in English. One, The Shoah in Lithuania, includes documents of the Lithuanian Activist Front detailing their intentions for Jewish citizens, issued before the outbreak of war on 22 June 1941. It is also rich in resources on understanding how, where and why the far right’s “Double Genocide” revisionism arose in the first place. These are just two of the many areas covered by the book. 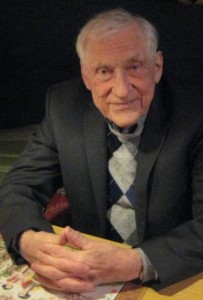 The second volume, The Book of Sorrow, focuses largely on the Jewish mass graves in the country.

The new website is prefaced by the moving foreword of the website’s creator, Vilnius resident Alex Levinson, about the life’s work of his father, who is now 96 years old.

Not many had known of Joseph Levinson’s pioneering work in locating, documenting, indexing and campaigning for the preservation of the old Jewish cemeteries of Lithuania, particularly in the 1990s before others were investing much time or effort in the cause. An article by Levinson on the subject, published last year in Defending History, led to some discussions on Facebook and other forums.

The new website contains a page on Joseph Levinson’s work in the field of old Jewish cemeteries, which includes fascinating samples of the typewritten data Levinson produced for his successors to build upon after traveling up and down the country on his own for years, with no grants or sponsors, to locate and survey each site. 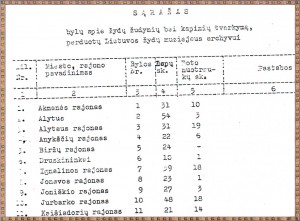 Cutout from one of many typed lists (1990s) that Joseph Levinson bequeathed to the Jewish museum comprising summaries of his findings on old Jewish cemeteries throughout Lithuania. Photo courtesy JosephLevinson.com and the Vilna Gaon Jewish State Museum of Lithuania.

The page on old cemeteries, and the rest of JosephLevinson.com, are expected to grow over time, as more and more of Levinson’s extraordinary output on Lithuanian Jewish and Holocaust issues is gathered. These contributions focus on mass graves and old Jewish cemeteries, but are not limited to these topics. They include essays and articles, museum exhibitions, and a steadfast determination to document the accurate history of the destruction of his people in their native land.

The new Joseph Levinson website has video and press materials on the extraordinary event to honor Joseph Levinson held at London’s Central Synagogue in 2010, attended by a UK cabinet minister, the Israeli ambassador, a major pulpit rabbi and a packed hall. Defending History posted an eyewitness report on the day.