The fragile but proud Jewish community of Lithuania was again shaken to its core by a Neo-Nazi march in broad daylight through sections of downtown Vilnius on Lithuania’s March 11 Independence Day (see below at March 2008). Once again, the marchers, this time numbering around 500, were diligently escorted by police. Marking the twentieth anniversary of the country’s bold breakaway from Soviet tyranny and its inspiring transition to a modern democracy — a magnificent achievement celebrated by all the country’s communities —  it is a cherished day all around. Its tainting by another police-escorted Neo-Nazi parade was all the more painful, especially for aged Holocaust Survivors. 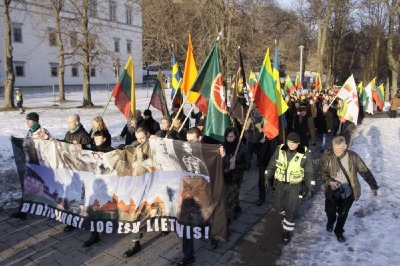 Once again, the government’s ‘red-equals-brown’ Holocaust Obfuscation movement played its part. In June of 2008, the country’s parliament had passed a law forbidding both Nazi and Soviet symbols. This struck observers as somewhat curious, given that there are no ‘pro-Soviet’ marches or efforts in the country, and the only people to be offended were very elderly veterans who cherished their victory over Hitler. The ultranationalist and neo-fascist movement, however, lost little time in proliferating an array of swasticals, a term we introduce to cover the ‘whole lot’ of swastika-inspired symbols used by ultranationalists, racists and neo-Nazis in the course of activities against ethnic, religious and sexual minorities, and against foreigners. By marching with ‘three-legged’ swastikas, with the ‘Lithuanian swastika’ and other variations, the neo-Nazis seem to have ‘outwitted’ lawmakers who seem quite content to be ‘outwitted’. Moreover, attempts to resurrect and march about with prewar swastikas as ‘art’ or as claimed ‘national symbol’ are gaining traction. 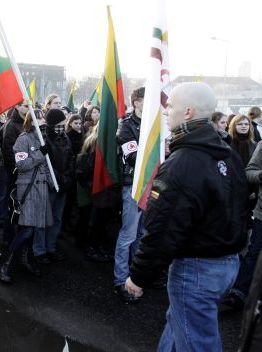 For aged Holocaust Survivors interviewed since the march, the most painful symbol was, however, not the swastika. It was rather the white armbands worn by some marchers, celebrating the infamous ‘activists’ who set the Lithuanian Holocaust in motion by murdering innocent civilian Jews in dozens of towns before the actual arrival of the Germans in the last week of June 1941. When Nazi forces arrived, ‘the white armbands’ became Hitler’s murderers par excellence. The flaunting of the armband on the streets of central Vilnius in 2010 is a grievous stain on the entire region. It is nevertheless hoped that in spite of recent setbacks on the freedom-of-speech front, major politicians, academics, intellectuals, law enforcement authorities and other elites will act rapidly — and convincingly. More photos and reports: Balsas.lt.  Delfi.lt.  Video by Lietuvos rytas .