Posted on 23 September 2014 by Defending History

In a widely disseminated press release today, the Yivo Institute for Jewish Research announced the launch of a fundraising campaign for US $5,250,000 for the “Yivo Vilna Project.” We are told that it is for “a seven-year international project to preserve, digitize and reunite virtually Yivo’s prewar archives located in New York City and Vilnius, Lithuania, through a dedicated web portal” that will create “the largest collection of Yiddish language materials in the world.”

There can be no higher resourcing priority for Yiddish Studies in the twenty-first century than the preservation and making freely available to everyone the treasures in the Yiddish language of the annihilated Jewish civilization of Eastern Europe. As lifelong friends of Yivo, we hasten to extend congratulations on the concept and all good wishes for its rapid fulfillment. If the digitization of heretofore undigitized Yiddish materials on a new website indeed requires $5,250,000, then that is the proper objective that we must all espouse.

“So much could instantly be solved by Yivo’s simple withdrawal from the Lithuanian government’s ‘red-brown commission’ and other nationalist bodies that support the Prague Declaration and Holocaust revisionism. Why does a New York institute dedicated to Yiddish need to be part of East European Holocaust politics in the first place?”

Of course, specialists in the field need to critically check against useless duplication of materials already available, including the eleven thousand texts in the National Yiddish Book Center’s Steven Spielberg Digital Yiddish Library and many other smaller collections. The best sign of good will toward Yiddish studies might be rapid scanning and posting online, for scholars and students of Yiddish, of the core collection of Yivo’s outstanding Vilna-era Yiddish academic publications that appeared between 1926 and 1939, from Filológishe shriftn (‘Philological Writings’) to the last issues of Noyakh Prilutski’s Yídish far ále (‘Yiddish for All’). This might even be accomplished within current resources at an early date.

More generally, the Yivo Vilna Project announced today along with a campaign to raise over five million dollars, calls for both praise for the splendid goal of building the world’s largest online Yiddish collection, and critical vigilance on two issues that have brought not a little pain to the Yivo’s most loyal supporters around the world.

The first of these concerns the principled use of sophisticated forms of the real Yiddish language as a living medium for teaching, research, writing, publishing and other activities, as a prime priority of Yivo, rather than some postmodernist mush in which “Yiddish” is delinguified into some general “East European Jewish culture” idol of the American marketplace (there is some excellent discussion of Yivo’s de-Yiddishization in Tatjana Soldat-Jaffe’s Twenty-First Century Yiddishism, 2012).

Yivo’s discontinuation of all Yiddish publications in recent years, and the publicly flaunted humiliating dismissal of its last Yiddish specialist dean, the erudite Dr. Paul Glasser, at the height of his educational career, have caused consternation among those for whom the Yivo’s bona fide goals are sacredly unique.

The second painful issue involves the Yivo director’s intensive and repeated joining with a right-wing Lithuanian nationalist effort to cover for the newest genre of Holocaust revisionism and distortion. Pained voices of protest came from 2011 onward from the last organization of Lithuanian Holocaust survivors, the longtime editor of the Lithuanian Jewish Community’s newspaper, the Leyzer Ran Family in New York City, and the Israel director of the Simon Wiesenthal Center. Instead of taking on board the sensitivities of its own most passionate lifelong supporters, Yivo took on the role of PR agent for the local Lithuanian government consulate in a series of memos to staff, on 9 Sept. and 13 Sept. of 2011. They trashed the critics, including Holocaust survivors and the Wiesenthal Center, and provided inaccurate information in place of serious discussion of painful issues, among them swastika legalization and the antisemitic record of a right-wing foreign minister honored by Yivo. All this while the defamed Jewish partisan veterans were left out in the cold.

While some American Jewish leaders are mesmerized by the glitter of consulates and high foreign honors, a number of very courageous Lithuanian citizens have stood up for the truth about the Holocaust and against the abuse of “Jewish” projects as cover for the ongoing revisionism. See also the 2014 Prophet Amos Awards.

In 2012, the Yivo director, shocking his own venerable predecessors in the post, participated in a Holocaust symposium in Vilnius designed to camouflage the same week’s state-sponsored reburial with full honors of the 1941 Nazi puppet prime minister who personally signed papers confirming orders for the Jews of his own city, Kaunas (Kovno), to be sent to a murder camp, and then for the remainder to be incarcerated in a ghetto.

A further jolt of pain to Holocaust survivors and their families came when the prime engine of the “Double Genocide” movement, the state-sponsored “red-brown commission” (officially “The International Commission for the Evaluation of the Crimes of the Nazi and Soviet Regimes in Lithuania”) announced with triumph in 2012 that it had as a new member the director of Yivo from New York. The red-brown commission has caused unspeakable anguish to survivors, has been taken to task by survivors, scholars and educators alike. It most recently called one of the last and most beloved Vilna Holocaust survivors “a liar” on its own website. There has still been no apology. When one group of commission members signed a letter to another wronged survivor, Dr. Yitzhak Arad, the Yivo director’s name was not among the signatories. Then, in 2014, Yivo announced a 2015 conference in partnership with various far-right academic institutions in Vilnius that have spared no effort to disseminate Double Genocide revisionism and to whitewash collaborators and perpetrators as purported national heroes. 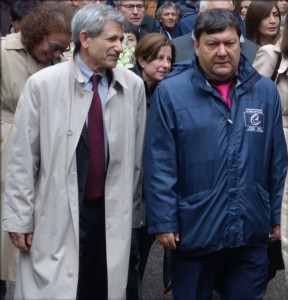 As the Yivo’s press release calling for 5.25 million dollars for the “Vilna Project” was released, the institute’s director was in Vilnius today, here seen with Lithuanian parliament member Emanuelis Zingeris at the annual memorial for the liquidation of the Vilna Ghetto.

These deeply disturbing events came into a renewed spotlight this week. To coincide with the Yivo’s appeal for the five and a quarter million dollars for digitization, its director has been here in Vilnius for a series of public and private events. On Sunday, he shocked local Jews at a conference by appearing to boast during his public remarks that material support for Yivo’s academic projects might be coming in part from a fund for restitution for the property of the murdered Jews for Lithuania that is meant to better the lives of the surviving Jewish community in Lithuania and to ensure the community’s future. To make the optics worse, he was flanked not by a top Yivo scholar of Yiddish, but by his fundraising maestro.

And today, when the five and a quarter million press release went out, the director was at the annual memorial at the mass murder site Ponár (Paneriai) outside Vilnius, where the Double Genocide establishment was able to gush that the wreath on behalf of the red-brown commission would be laid by its director, Emanuelis Zingeris (the only Jew in Europe to sign the Prague Declaration), its executive director Ronaldas Račinskas, known for his diversity of messages, and for defaming Holocaust survivors), and Dr. Jonathan Brent, the director of Yivo. Dr. Brent is an eminent American publisher, author and Sovietologist; it is in his most recent role as Yivo director that survivors and Yiddishists feel he has naively been manipulated by Holocaust-revisionist elements in the Lithuanian government, and particularly the red-brown commission.

It made the ultranationalist camp here giddy with glee. The hallowed word “Yivo” is now somehow part of the Zingeris-Račinskas commission. But Holocaust survivor Prof. Pinchos Fridberg of Vilnius, himself defamed by the commission after correcting an error, issued this statement:

“I, Pinchos Fridberg, who was born here in Vilna in 1938, cannot understand how the director of the Yiddish institute Yivo could have anything to do with the commission led by a Lithuanian politician of Jewish origin who has not publicly condemned the 2012 reburial with full honors of Juozas Ambrazevičius-Brazaitis, head of the 1941 Nazi puppet government in Kaunas. After all, his own mother was a prisoner of the Kaunas (Kovno) Ghetto, a ghetto established by order of the same Ambrazevičius-Brazaitis.”

There can scarcely have been a greater symbolic betrayal of the people who built Yivo, the last survivors of the Holocaust today, and the sacred causes for which Yivo was built right here in Vilna.

The magnificent new project to digitize and make available the treasures of Yiddish, in the original, deserves wide and generous support. At the same time, the disturbing issues that haunt the five-plus million drive merit the utmost scrutiny to ensure that the project, and the memory of those who created the documents to be digitized, is not compromised or manipulated for PR by the unseemly Holocaust politics of contemporary Eastern Europe. Or by the disturbing trend, particularly in the United States, to make PR hay of Yiddishless Yiddish.

By rapidly restoring Yiddish specialist staff and publications, and rapidly breaking links with the far-right political establishment in Lithuania, Yivo can and should begin a new period of unbridled success, success coupled with loyalty to Yiddish and loyalty to Yivo’s true ideals and constituencies.

In that context, the new Vilna Project would in a flash be alchemized into a universally acclaimed sterling endeavor.