Max Kaufmann had the misfortune of living in Latvia prior to the war. Thus – and we know this a posteriori – the odds were well over 80 to 1 that he would not survive those unending days, weeks, months and years of slavery under the yoke of Nazi and Latvian thugs intent on having him die only because he was born a Jew.

In such a world as devised by the Nazis, a world where the “survival of the fittest” was no hollow axiom, to survive that infernal and inhuman lottery, you had to be lucky, shrewd, resilient, uncommonly tough of body and spirit. Able to adapt quickly, to improvise just as quickly, able to judge in a mere glance and react as quickly. And there was no apprenticeship to train you in survival techniques, you had to learn it rapidly and the hard way.

But after the untimely death of his wife Franka first (in one of the Aktionen in Rumbula in the fall of 1941), his son Arthur later, after a momentary mental depression, Kaufmann fought to survive and to be able, after the war, to give testimony for these sufferings the Jews had to endure. He stated so clearly in his preface to the July 1947 publication of his work:

“I wish to build, in my own way, a lasting memorial to all those who have perished […] I wish to give to those of my countrymen who have not been in Latvia during the past years a clear picture of the misfortune and the sufferings of the Latvian Jews […] I wish to let the world know how large a role was played by the native Latvian population in our tragedy…”

Kaufmann, all by himself, basing himself on his almost perfect total recall and his deep sense of outrage, wrote a book about what he endured during the war. It covers the first days of war, the beginning of the German occupation, the danger, the discriminations, the ghetto, the work Kommandos in Riga, the concentration camps in Latvia, the forced deportation to Germany, his stay in Stutthof, Magdeburg, Sachsenhausen, the death marches, the survival due to lucky odds.

This book that had first been published in 1947 in German, long before any historians had had the time to take a look at the tragedy and material on hand. 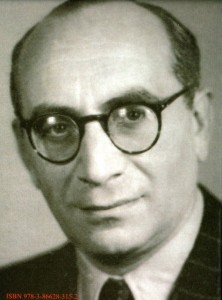 It is a remarkable account, by all means. It tells in a precise, almost surgical, manner, the abrupt fall from normal life to slavery, in just a matter of a few weeks. One day, you are happy, living in your own country with your cherished wife and son, then, all of a sudden, you find yourself in enforced confinement in inhuman conditions, without any means of living or surviving, having to work as a slave, and at the mercy of any thug passing by who might erase your life with a mere shrug.

The work is not restricted to Kaufmann’s own fate alone, because in a series of chapters he describes how the Jews of Latgale, Zemgale, Kurzeme and Vidzeme were exterminated. An example related to Liepāja:

“The SD leader was the notorious murderer Kügler, assisted by Handke, Kraft and others. With their help the first Aktion began on 23 July, and it cost about 4,000 Jews, mostly men, their lives. Dr. Schwab, who was prominent in Liepāja, died an especially gruesome death. They gouged out one of his eyes and tortured him until he himself begged to be killed.”

He also describes what happened in the ‘Zentralka’ and ‘Terminka’ prisons or in the prison cells at the head office of the Pērkoņkrusts on Valdemāra Street, in Riga, during the first days and weeks of the German occupation.

His account of the war years displays all the astuteness of a journalist or historian:

“One day as we came home  [note the use of the word ‘home’, whereas Kaufmann was then ‘living’ in the Riga ghetto, it is winter in 1942] from our work, we found a group of photographers and reporters from Germany at the entrance to the ghetto. They had shown up expressly to get material for illustrated journals. They sought out the ugliest and most ragged people from our ranks and forced them to make grotesque faces besides. Later we saw in a journal the picture of our comrades, captioned: ‘Typical faces of the Riga ghetto’!”

In other parts, he writes about the cultural life in the Riga ghetto. One anecdote is of special interest, it is about the song ‘Der Becher’ (the Pitcher) and this is what the author has to say:

“Frug’s text [a poet] is based on the following legend: a pitcher stands in the sky, and all Jewish tears fall into it and are collected there. When this pitcher is full, the Messiah will come. Now we really had to ask whether so many tears had still not filled it up. But perhaps the tears in this pitcher were drying up again? These words were so much more relevant to our time than to the one in which the poet had written them. Yet in spite of the incalculable number of tears shed in recent years, the pitcher had still not been filled up!”

Kaufmann is a man as I like them. Quite opinionated, he never eschews to say what he thinks, and his hatred of the Nazis and the willing Latvian helpers, of inhuman Kapos, his delight when brutes or betrayers were killed by fellow inmates (for example the execution of a Jewish betrayer by fellow inmates at Kaiserwald, page 191), denotes not only a man intent on revenge but a man who – soundly – takes pleasure in seeing justice rendered albeit in such a horrible manner. After the defeat of the Germans in Stalingrad [February 1943], he exclaimed

“Tomus nafshi im Plishtim!” (May I perish [‘may my soul perish’] together with the Philistines!)

Yet, he is honest in his anger as he is in relating his pain. When he narrates the circumstances of his wife’s disappearance and those of his son’s death, he does not hide his immense pain, and, thus, we can understand what it meant to lose one’s loved ones in that hell that the ghettos were. But, after his son’s untimely murder, he was near the end. As Gertrude Schneider recalled:

“For several weeks after the personal catastrophe, Kaufmann did not speak, according to people close to him. On the day when the Kommando left Sloka for the Riga concentration camp Kaiserwald, after staying a few days in the almost empty ghetto, the bereaved father raised his hands to the heavens and swore that he would avenge his son’s death.”

Regarding his wife’s death, he had always thought that the Nazis wanted to wipe out the Latvian Jews of the large Riga ghetto (Aktionen of 30 November and 8 December 1941) in order to make place for the German Jews deported from Germany. As Gertrude Schneider[2], a German Jew who knew the author and his son at the time of their detention in the Riga ghetto wrote in her introduction to the book:

“Arthur [Kaufmann’s son] did not come very often. He told one of the German Jews, a boy his age, that his father was not happy when he went to the German ghetto, since he thought, as did many of the other Latvian Jews, that their families had been murdered so as to make space for the German, Austrian and Czech Jews, who arrived shortly after the bloody massacres endured by their Latvian brethren.”

This hatred towards the German Jews is perceptible during the whole account of his years of slavery (for instance: ‘The distance between the Latvian Jews and the German Jews continued to grow’ — p. 108). But this hatred was somewhat compensated by the inherent empathy and sense of justice of this humanitarian:

“When we went to work in the morning, the children were already standing by the fence [it relates to the Jewish children from Germany held in the ghetto[ and calling out to the work crews that were marching past them: ‘Uncle, bread, bread!’ They whined and wept. Even though we ourselves were very short of bread at our work stations, we still gave them our last remaining pieces. Then we scavenged bread at our work stations, and in the evening we brought it with us to the waiting children.”

By small descriptions such as these,  as well as numerous others recounted all along his detailed account,  we can feel that, despite the horrendous conditions he had to go through, Max Kaufmann remained a humanitarian individual.

After the war, Kaufmann went back to Riga, at considerable risk, and attended Jeckeln’s trial[3]. And as Schneider recounts:

“Kaufmann listened to Jeckeln’s testimony and found out that the latter had been sent to Latvia, because both he and the authorities in Berlin believed that Latvia and its citizens were especially efficient in aiding the Germans in the destruction of their fellow Jewish citizens as well as for thousands of foreign Jews sent to that inhospitable country for liquidation.”

This is a remarkable book which gives us a true and somewhat historical insight into the murdering machinery that led to the extermination of nearly all Latvian Jews. And, the most astonishing fact is that it was written so shortly after the war by a man not only intent on taking his revenge but who also had at his disposal a marvelous memory, who could write well and who held firm opinions and was not afraid to state them as firmly.

“Why publish this oeuvre in English now? [in 2010]”asks Dr. George Schwab[4] in his foreword. Apart from the need for a more complete research in this matter, the second reason he invokes does have an impact on what we see and hear today within revisionist circles:

“Another reason why this work should be known today is the need to counter the works of charlatans writers who, out of ignorance or prejudice or malice, deny that the Holocaust in Latvia and elsewhere ever took place and dismiss eyewitness accounts and documentary evidence as inventions by Jews and their sympathizers.”

I think that this book, as well as important other works about the Holocaust should be required reading among the high school students in the countries where the Holocaust occurred. Because, as we know from surveys, the younger generations know barely anything about these crimes of genocide, or care about them.

And if we want to preserve the memory of what happened, remember the magnitude of the committed crimes, the immense toll in human lives, we have to do it now before it is too late. Before the last eyewitnesses are no more.

[3] Jeckeln, the Einsatzgruppe leader (C first, later A), who was hanged for the crimes committed in Latvia, had previously been known for his bestiality because he commanded and supervised the mass killings at Babi Yar, Kamenets-Podolski, Berditchev, Dniepropetrovsk and Rovno (cf. Raul Hilberg’s  historical work on the destruction of the European Jews) before acting so ruthlessly in Latvia.

[4] Professor Emeritus, City University of New York (City College and Graduate Center), President, National Committee on American Foreign Policy, one of the Founders of the “Jewish Survivors of Latvia, Inc”.