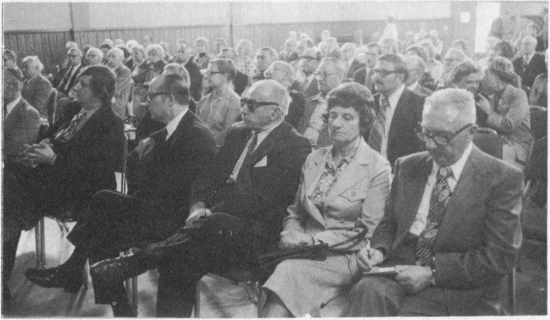 The purpose of the Center is to investigate the tradition of democratic thought in Lithuanian history, in times of both independence and occupation, to reveal and strengthen its ties with current democratic values, and to remind society of the names and intellectual heritage of those individuals who consistently defended and nurtured democratic thought in Lithuania and the diaspora. The National Library is providing a room on the fifth floor for the new Center, much as it has for its recently opened Judaic Studies Center. It is celebrating the opening of the Damušis Center with a very insular two-day Political Studies Conference which was originally founded in Los Angeles in 1969 by the Friends of the Lithuanian Front, an organization that cherishes the spirit of the Lithuanian Activist Front. 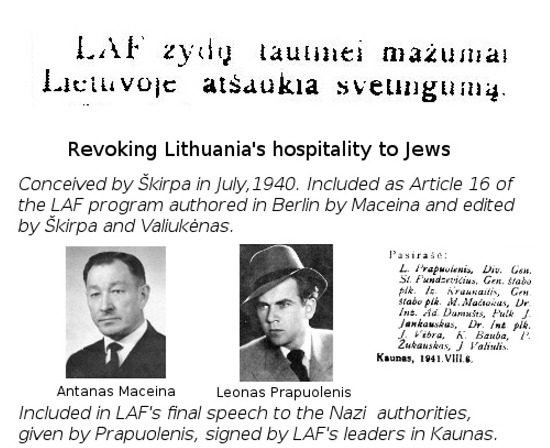 Unfortunately, Adolfas Damušis, along with other LAF leaders, was a signatory to the final speech given by Leonas Prapuolenis on August 6, 1941, which included the infamous phrase “LAF revokes hospitality to the Jewish ethnic minority”. This phrase, along with much of the speech, was taken verbatim from the LAF program written in Berlin by philosopher Antanas Maceina and edited by Kazys Škirpa and his assistant Antanas Valiukėnas. The speech as a whole was badly received by the Nazi authorities, and Leonas Prapuolenis, the 28-year-old who had declared Lithuania’s independence, was arrested by the Gestapo that fall and held in the Dachau concentration camp for half a year. The speech could not be published in Kaunas, but there was less Nazi censorship in Panevėžys. It was published by the newspaper there, Išlaisvintas panevėžietis, which had a circulation in the tens of thousands. Tragically, this polite endorsement by Lithuanian patriots for ethnic cleansing of Jews came at the height of the Holocaust in Lithuania’s shtetls.

If Adolfas Damušis were alive today, then perhaps he would be quite surprised to realize what he had signed at the time. He might acknowledge and publicly regret his role in giving weight to this deadly statement. 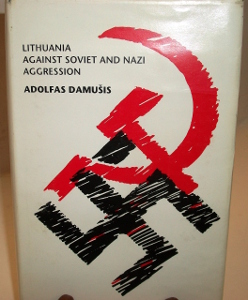 However, such mistakes can’t be acknowledged. The Damušis legacy is being used to champion a particular interpretation of Lithuanian history whose heroes are Catholic youth leaders such as Damušis and Prapuolenis and Catholic intellectuals such as philosophers Antanas Maceina and Juozas Girnius. The idea is that although certain despicable Lithuanians participated in Nazi German atrocities, there were others, true Lithuanian patriots of clear conscience, who were consistently democratic and thus anti-Soviet, anti-Nazi, and anti-Smetona. And those who think otherwise are, simply put, anti-Lithuanian. Unfortunately, the truth is that in 1941, there was a spectrum of crimes against humanity endorsed by Lithuanian leaders, ranging from genocide (the Lithuanian Nationalist Party and the Lithuanian Security Police) to ethnic cleansing (the Lithuanian Activist Front, including Škirpa, Damušis, Maceina). The spectrum explains why many Lithuanian leaders of that time, when comparing themselves with others, did not find themselves at fault. But if we hold them to an absolute standard, then we can acknowledge ways in which their words and deeds were absolutely wrong, as far as their victims are concerned, and all who empathize with them.

Vidmantas Valiušaitis, the leader of the Center, has as a journalist made important interviews with Kazys Bobelis about how the latter’s father, Kaunas military commandant Jurgis Bobelis, was deposed by the Lithuanian Nationalist Party so that it could persecute Jews. However, Valiušaitis is an adamant defender of Kazys Škirpa, claiming in the September, 2015 issue of Kultūros barai, a leading intellectual magazine, that people are not interested in the facts, whereas he had personally searched the Škirpa archives in the US and had found nothing antisemitic. [Editor’s note: See also Dr. Kulikauskas’s study of Škirpa’s advocacy of ethnic cleansing of Lithuanian Jewry.]

Surprisingly, even after he was personally shown Škirpa’s original memoir and antisemitic leaflets, published at Defending History, he continued to claim in a December, 2016 article that Škirpa never wrote anything antisemitic, and to berate those who would state otherwise, as not considering the facts.

Ambassador Gintė Damušytė, originally from Chicago, was also informed in March, 2016 about her father’s unfortunate endorsement of ethnic cleansing. At the time she was not able to voice regret for her father’s actions. She simply stated that he was never antisemitic and that such issues should be avoided because they hurt democracy in the Ukraine. Vilnius Archbishop Gintaras Grušas, originally from Los Angeles, was also informed. Even so, he gave the invocation at the new Center.

Friday’s schedule included historian Augustinas Idzelis, who has done novel research on the Holocaust in Lithuania, and is currently working on a book about Soviet Jewish secret police conspiracies against Lithuanians. Philosopher Kęstutis Girnius also spoke, but not about his father. On August 30, 1941, at the height of the Holocaust in Lithuania, the newspaper Į Laisvę which had a circulation of 200,000, published the first of four articles by his father, philosopher Juozas Girnius, on “The Ideas on which National Socialism is Based”.

Vidmantas Valiušaitis concluded with a talk about how Lithuania was historically a victim, how Soviet propaganda falsely claimed that Lithuanians were Nazis, and specifically how Jews in other countries, such as Hungary or France, were persecuted in ways they never were in Lithuania. 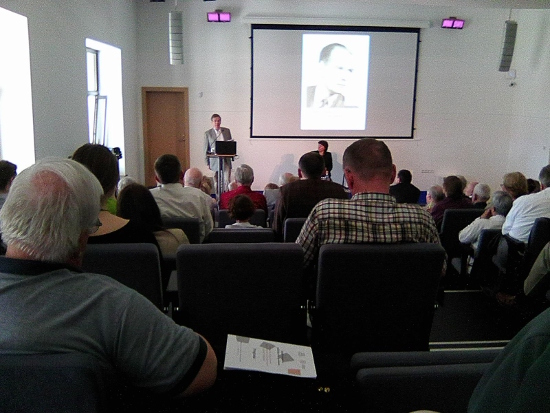 Saturday’s schedule includes a talk by a young Catholic intellectual, Vytautas Sinica, who consistently champions a Lithuanian patriotism that stands up to Islam, homosexuality, Putin and anti-Lithuanian interpretations of the Holocaust. The title of his talk is “Our Own People Shot at Our Own People: Who Is Writing Lithuania’s History?” The conference ends with a round table, “They Spoke for Us: How Is the Intellectual Heritage of Resistance Relevant Today” that refers explicitly to A. Damušis, V. Dambrava, K. Škirpa, J. Kojelis, P. Kisielius, K. Milkeraitis. Given the controversy over why streets in Vilnius and in Kaunas are named after K. Škirpa, it is remarkable that such a discussion, and the entire conference, is taking place at the Mažvydas National Library without any Jewish voices.

* LAF Propaganda Commission Chairman Bronys Raila, author of antisemitic leaflets, who spoke regularly on Radio Free Europe, and who was reburied at the Writers’ Pantheon in Kaunas in 2015 for his merits to Kaunas and Lithuania;

* Lithuanian boy scout icon Mykolas Naujokaitis, who as a young man was sent by LAF Vilnius to contact Škirpa in Berlin, who memorized Škirpa’s plans, which included ethnic cleansing, and who the Soviets caught at the border on his return with antisemitic leaflets encouraging ethnic cleansing and even genocide;

* Lithuanian general Stasys Raštikis, a darling of the Christian Democrats, who translated Škirpa’s strategic plans, including ethnic cleansing, into German, so that the Nazis could approve. 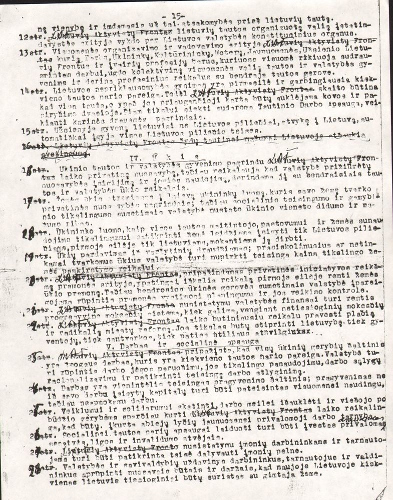 I personally learned of this conference only Friday morning 16 June. I prepared and distributed two flyers, in Lithuanian. One had my suggestions for the National Library and the new Center:

* That the National Library publish (online) K. Škirpa’s original memoir from 1942 and his assembled documents, including some twenty antisemitic leaflets.

* That the Center organize a discussion, How to empathize with Lithuania’s Jews? to consider a national symbol of empathy, such as restoring Vilnius’s oldest Jewish cemetery. 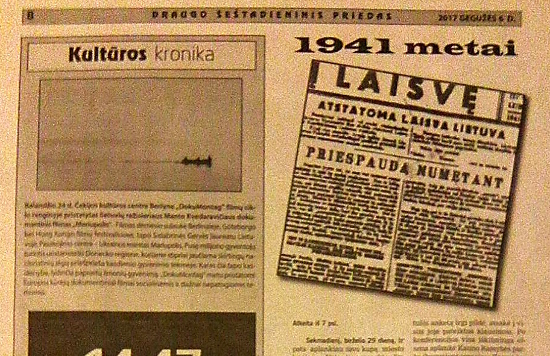 My other flyer compared the original first issue of Į Laisvę from 1941 with the cropped (removing “Hitler’s declaration”) and blurred (making the antisemitic content unreadable) iconic version published in a recent article in Draugas, the Lithuanian American Catholic newspaper. It’s an example of Fake News that has persisted over the decades in the Lithuanian American community. Sadly, Renata Šerelytė, the editor of the Saturday supplement, never responded to my letter to her.

At the conference, I was encouraged by the opportunity to ask questions, and I was hoping to ask philosopher Kęstutis Girnius for his personal thoughts on how to deal with the antisemitic legacy of our families and empathize with Lithuania’s Jews. However, the program fell behind schedule and I was not allowed to ask any questions. So I simply stood up in front and spoke, so that all could hear, of the unfortunate antisemitic deeds of Juozas Girnius, Adolfas Damušis, and my own grandfather, Bronius Kviklys. I was met with jeers by the august audience: “You should speak in Russian; Your grandfather Jonas Kulikauskas (who was executed by the Nazis along with Jews) was a Communist and you should apologize for that; You are getting paid; You destroyed this event.” However, one person, Vytautas Matulevičius, a former member of the Seimas, stood by me and supported me, “He should have been allowed to speak. This is a center for democracy.”

Afterwards, I came upon a young Lithuanian whose T-shirt made me think of my day and also our attitude towards Lithuanian history: “I am not sorry for what I said when I was stoned”. He agreed that I share his picture. 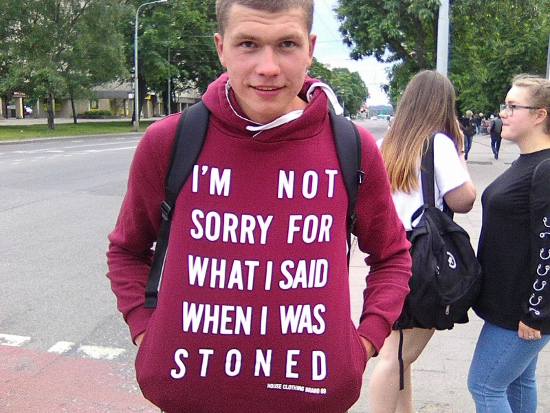