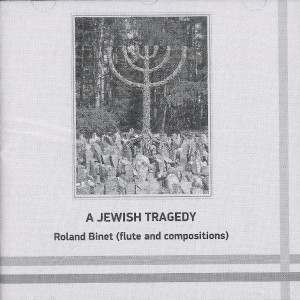 As I had already read much about the killing pits, I was deeply impacted by both these sites and, chiefly, by the horrible tragedy that befell the Jews of the Baltic States and the staggering figures of victims executed, resulting in the near-total annihilation of both nations’ centuries old Jewish communities.

So, as I am an amateur flutist, I decided that another way to express personal commemoration of the Jewish victims was to compose a number of solo flute pieces intended to musically convey what the hundreds of thousands of Jews who were killed by the Nazis and their henchmen went through during the whole period of the war and, above all, during their last moments on this earth.

The music was recorded in a professional studio in Belgium during two sessions, the first one on 21 October   2013, the second one on 6 January 2014. I recently auto-produced a CD of that musical tribute and evocation, in cooperation with the Riga Ghetto and Latvian Holocaust Museum in Riga which gave me all the support and encouragement I needed for such a venture.

It is about nineteen minutes long and is divided into two main tributes. First “A Tribute to the Victims of Rumbula” made up of two separate pieces. Secondly “A Jewish Tragedy” which is a suite made up of five different pieces (War/Ghetto/The Killing Pits/Liberation/Remembrance). It is to be noted that the “Liberation” piece is a personal rendition of the “Hatikvah,” a fitting piece for the few surviving Jews for whom Israel remained a unique hope.

The intended overall tone of the pieces is one of immense desperation befitting the horrible circumstances of these horrible tragedies. And the flute is perhaps the appropriate instrument to convey such sadness. Naturally critics will judge my efforts by their standards, and so it should be.

The CDs are available at the Ghetto Museum in Riga/Latvia (Maskavas 14) and will be available for a donation to the museum.