Posted on 3 May 2019 by Defending History

NEW YORK CITY—Hundreds of Jewish high school students from the New York area, pupils at Rambam Mesivta High School, demonstrated peacefully and with dignity outside the Lithuanian Consulate in New York City yesterday, led by their renowned principal, Rabbi Zev Meir Friedman. The day was Yom Hashoah, a day of remembrance for the victims of the Holocaust, and the occasion was the Lithuanian government’s continued glorification of Jonas Noreika, a major Holocaust collaborator who participated in the destruction of thousands of the country’s citizens in 1941. The Noreika debate is now seven years old, and can be followed chronologically in Defending History (see most recent update).

Students chanted, “Your hero is a Nazi!” 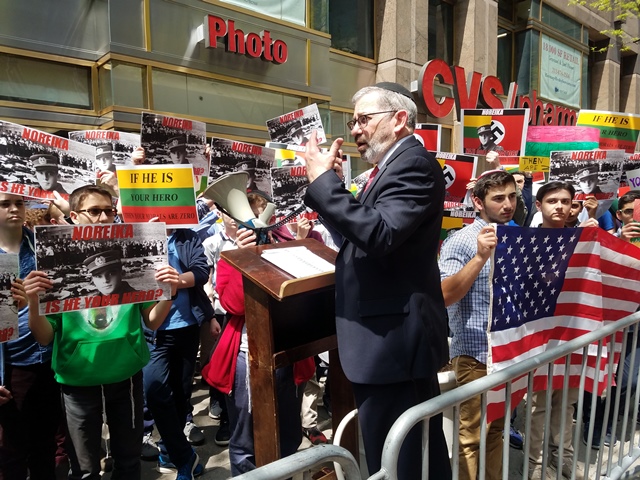 Rabbi Zev Meir Friedman, dean of the Rambam Mesivta Jewish high school, addresses the rally outside the Lithuanian consulate in New York protesting the government’s continued glorification of a major Holocaust collaborator in a country where around 96% of Jewish citizens were massacred during the Holocaust. The event marked Yom Hashoah, Holocaust remembrance day.

Noreika’s sordid past, first revealed to the English speaking world seven years ago by Lithuanian ethicist and journalist Evaldas Balčiūnas (who suffered years of kangaroo legal harassment for his series of essays asking why his country honors Holocaust murderers), received major international attention last year when Noreika’s American-born gradddaughter, the Chicago author and educator Silvia Foti, published a dramatic and courageous piece on the truth about her grandfather. In addition, California financial advisor Grant Gochin, whose family lost around a hundred people in the precise region of northwest Lithuania where Noreika operated, took legal action in Vilnius against the state-sponsored Genocide Center in Vilnius whose “research” has for decades been the excuse for the state’s honoring of various collaborators by street names, plaques, school names and more.

At yesterday’s rally, Rambam students Judah Orlanski and Avi Balsam read parts of Ms. Foti’s documentation of Noreika’s crimes and the students responded by chanting, “His hands are drenched in blood.” The prime Lithuanian researcher assisting both Ms. Foti and Mr. Gochin is Defending History’s longtime author, the prolific American Lithuanian scholar Dr. Andrius Kulikauskas who settled many years ago in his ancestral homeland.

Rabbi Zev Meir Friedman, Rambam’s dean recounted Lithuania’s role in the Holocaust, explaining that around 96% of Lithuanian Jews were murdered. Friedman asked if it is “not shocking that they chose to honor a Nazi collaborator being that their land is drenched in Jewish blood,” said Friedman.

Students raised their voices and proclaimed in unison, “We will not be silent, we will not forget.”

According to Rambam junior, Yidi Sprei from Brooklyn, “The rally is the least we could do to remind the world that our community will not tolerate antisemitism or Holocaust distortion.”