Posted on 23 December 2009 by Defending History


German Social Democratic parliamentarian Gert Weisskirchen was awarded a certificate of honor at the Israeli Knesset on 16 December for a lifetime of fighting antisemitism, racism, and Holocaust distortion. The Knesset session was integrated into the Global Forum for Combating Antisemitism. 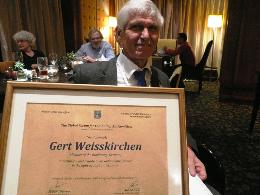 During an informal celebration at Jerusalem’s Crowne Plaza Hotel, Mr Weisskirchen penned, in his famed telegraphic style, on Global Forum letterpaper, his opposition to the ‘Prague Declaration’ in the spirit of three new ‘DEs’: ‘De-valuation of the victims, De-stortion of history, De-legimitization of the Holocaust. These are the reasons why I oppose the Prague Declaration’ — Gert Weisskirchen