The following is a paste-in of today’s Facebook post by Dovid Katz marking Fania Yocheles Brantsovsky’s 100th birthday in Vilnius, Lithuania. The original, along with its Comments section is on FB, accompanied by a modest selection of photographs of Fania, and of Fania with Dovid and others over the years. 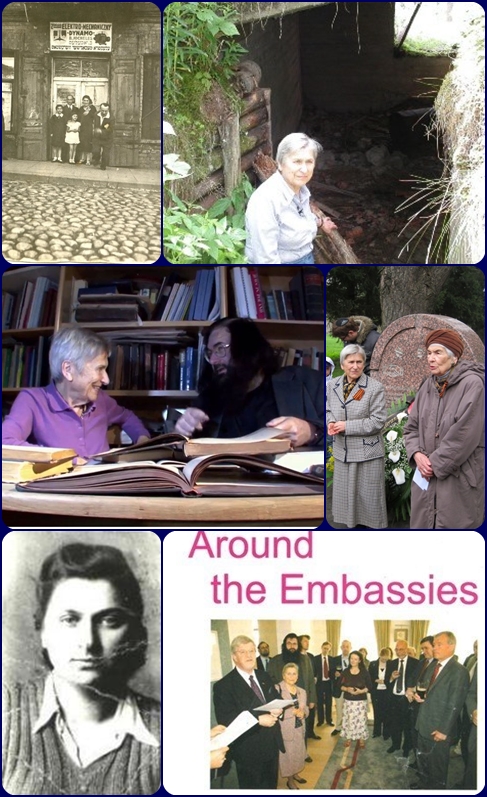 Clockwise from upper left: Fania is at far left in family photo from 1932 or 1933 in front of her father’s shop on Vilna’s Zavalna St. (today Pylimo in Vilnius); Fania showing visitors the underground bunkers where she lived while fighting the Nazis in the Jewish partisan fort in the forest (now sinking into the ground, Fania’s last wish is that it be restored and preserved for posterity); Fania and fellow partisan veteran Chasia Langbord Shpanerflig sing the partisan hymn at a May 9th memorial; Fania bring honored at a banquet at the residence of the Irish ambassador to Lithuania, HE Dónal Denham in a pushback against state attempts to prosecute and defame her and other veterans of the Jewish partisans with ambassadors from Norway, Austria, France, the UK and other Western nations joining in; Fania in the Vilna Ghetto (1941-1943); with Dovid enjoying looking at some old Vilna Yiddish books together.

Today, May 22nd 2022, is Fania’s 100th. It has been a privilege to know her and work closely with her for some thirty years. A graduate of Vilna’s remarkable secular Yiddish school built by the legendary Sofia Markovna Gurevitsh, she went on to suffer loss of her entire family in the Holocaust. Her own incarceration in the Vilna Ghetto lasted from the Ghetto’s first day to its last, when she escaped to join the Jewish partisans with whom she fought heroically in the forests of Lithuania against the Nazis, based in the wooden underground bunkers at the “Jewish fort” outside Vilnius, which Fania dreams to this day will be restored and preserved for future generations to remember the Holocaust and the Jewish resistance (it is at present literally sinking into the earth). To come together to make this happen would be Fania’s most cherished 100th birthday present. (Alas efforts to date have faded with various organizations’ timidity, but may that now rapidly change!).

For a summary of the story of the Last Jewish Fort, please see Defending History’s report.

Please try to imagine the mental cruelty Holocaust survivor Fania (who lost her entire family, herself survived by joining the anti-Nazi resistance, becoming a hero of the free world) has had to endure from a major state-sponsored commission in an EU member state. This has been covered in a major documentary film (alternate link). See also recent ultranationalists’ defamation of Fania.

Memoirs of time with Fania are included in the new book by former Irish ambassador to Lithuania Dónal Denham, and in an earlier memoir by Professor David Crystal

During my years of building Yiddish studies at Vilnius University (since, alas, dismantled to the core by authorities, for political reasons…), my first staff appointment recommendation was of Fania as our Yiddish librarian, a post she dreamt of as a little girl back at Sofia Gurevich’s school on Makóve (today’s Aguonų gatvę—hopefully the building will be marked with a historic plaque!). From the late 1980s, Fania was at the core of the Vilna Jewish survivors’ work to build the Green House Holocaust Museum, which stands to this day. She has shown thousands upon thousands of visitors around old Vilna, the Vilna Ghetto streets, Ponar, the Green House, and of course the Partisan Fort. Back in May 2019 the highlight for many in our Workmens Circle Yiddishland trip was to be with Fania at the fort where she lived and fought in 1943-1944. Some personal photographic memories from recent decades.

It was a huge personal privilege to be part of mounting the international defense against antisemitic prosecutors’ charges against her, Rachel Margolis (1921-2015) and others in a far-right attempt to “equalize” Nazi and Soviet roles in the Holocaust. Among the many documents of that saga, and its lasting repercussions in the European Parliament, is Danny Ben-Moshe’s documentary, now available free online.

It would be a gracious gesture for Lithuania’s government today to issue Fania and her family (and the families of the other defamed and falsely accused Jewish partisan heroes) with a public letter of apology as a gesture toward making good the damage evident in ongoing far-right historians’ abuse of the saga to diminish the Holocaust by defaming the victims and the heroes of the resistance (for a video example, see how the leadership of the state-sponsored ‘Red-Brown Commission’ continues to exploit it all (with de-facto shielding from wannabe photo-op addict quislings from the U.S., South Africa, Israel, UK, etc).

At the same time, let’s remember how the Western ambassadors in Vilnius, led by Ireland, UK, France, Norway, and Austria among others, joined in making it clear to authorities that this kangaroo nonsense must stop (one memoir has just appeared in former Irish Ambassador Dónal Denham’s new book, Nine Lives available online). To follow the principal historical developments and documents, please see, as a start: https://defendinghistory.com/blaming-the-victims. For individual reports from 2008 onward, please see Defending History’s Fania section.

In addition to the longer term project of working toward saving the Jewish Partisan Fort from sinking further into the earth and ensuring that it remains an internationally preserved site in Lithuania, there is the easier and shorter term way of celebrating a little bit of Fania’s 100th by having a look at and enjoying some of the videos of Fania in action over the decades. The following is our own little selection (from the Lithuanian Yiddish Video Archive — LYVA). The last interview in the series took place in her tiny Vilnius flat on 3 March 2020, just days before the lockdown…

Enjoy an evening seeing Fania in action on video over the years:

These are all now part of the Lithuanian Yiddish Video Archive (LYVA).

One of so many ways to begin to fathom the inner strength of this woman, and her unbridled dedication to educating thousands on both the Lithuanian Holocaust (the historically accurate version) and Vilna’s Yiddish culture, is to have even some little idea of what she was being subjected to during all these public events, a few of which are captured on these videos, alongside her unsurpassed ability to energetically convey the language, tone, feel and culture of interwar Vilna Yiddish culture.

In honor of Fania’s 100th birthday, Defending History has today inaugurated the new Fania Brantsovsky Section including all articles and reports in which she has played a vital part over the years.