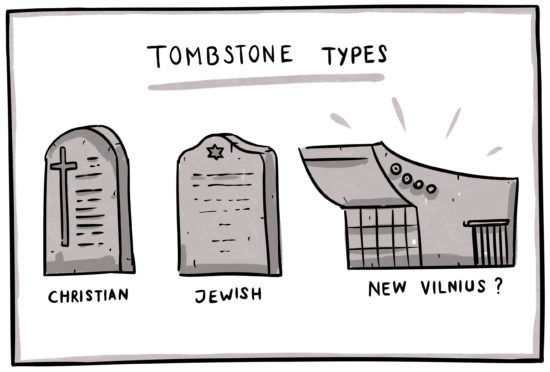 For more background concerning the significance of the Old Vilnius Jewish Cemetery at Piramont (Šnipiškės), see the article by the primary international scholar on the subject, Prof. Sid (Shnayer) Leiman.

“Civilized proposals, however they may differ, share one premise: moving the convention center project away from the Old Jewish Cemetery.”

Most recently, right in the midst of the international quarantine in the face of the Coronavirus pandemic, and in the days of a hoped-for good will in the run-up to Passover and Easter, the level of intrigue and “confusionism” coming out of corners of London and Vilnius has led some in other countries to start hinting about a supposed “compromise” whereby the building would itself remain untouched and become a memorial to the dead. No matter how well-intentioned, in real life this will end up meaning welcoming the puzzling argument employed by the Lithuanian property developers and affiliated officials for a convention center “plus” some nice memorials.

Already for the second time around, property developers and aligned government officials are making the case that the ground under the former Sport Palace is not part of the cemetery, it is some kind of non-cemetery “island.” Those of us following events here for decades remember very well this argumentation about the two new apartment buildings with businesses (two more “islands”) built over a decade ago, also right on the cemetery. Earth and bones were removed in the dead of night and to this day nobody knows to where.

What would be the “compromise? (Remember, last time, back in 2009, it was that if only those foreign Jews would shut up about the two buildings, then no more would ever be developed on or pillaged from the old cemetery.)  This time, the “logic” would run something like this: “Well, there might also be a convention center where tens of thousands of people would cheer, clap, use washrooms and bars surrounded by and on the top of the graves of Jewish Vilna going back to the fifteenth century, but no worries, man, there’ll be dashing memorials to the Jews.”

In short, beware of visualizations of the future that don’t dare show any reconstructed gravestones or memorial structures. Why? Because they would ruin a lot of the dance macabre business. Many good people of all faiths and none are just not inclined to enjoy a convention or concert in the middle of a cemetery. Period.

The Soviets’ Palace of Sports was finally closed in 2008 due to the decay of the building. It is an ugly Soviet eyesore that should be taken down. Of course, the decree calling it some so-called great object of national “heritage” needs to be revoked. It is not an argument for the living and vibrant citizenry of our 21st century European homeland, the less so in a country where such Soviet structures are routinely hated and taken down.

Naturally, there are many and diverse possibilities for cemetery preservation, but all the civilized ones presuppose one premise: moving the convention center project away from the Old Jewish Cemetery as the necessary point of departure.

Our modern democratic world of the EU, NATO, and others judge countries by their ability to grant equal rights to all human beings, to all ethnic and religious groups. What we would never do to a 500-year-old Lithuanian historic cemetery, we should not do to the old Jewish cemetery that could be lovingly restored, just as the old Jewish cemetery in Frankfurt or indeed, the Christian Bernardine and Rasos cemeteries in Vilnius, that bring honor and prestige to our country.

While the Soviet project to destroy the Old Jewish Cemetery is well known and much discussed, that in no way justifies today’s continued planning for the consummation of that destruction by a small group of post-Soviet builders, business and political interests, aided and abetted by their Jewish “enablers” (who also stand to profit one way or another). Such alliances of “justification” by the minority group concerned are not becoming for our 21st century.

Profit in itself is not bad, but planning to achieve it by organizing sport and show and other public events in the cemetery is simply a sick, macabre idea. It sounds even more macabre when you remember it would not be done if this were a Lithuanian cemetery where the nation’s heroes over half a millennium were laid to rest. The designers of the current project do not seem to be constrained by religious or moral norms, or by respect for the helpless, the voiceless, the annihilated (the descendants who would be defending their ancestors’ graves here perished in the Holocaust at the hands of the Nazis and their collaborators). What is more, they even find “help” among a few Jewish “leaders” to defend “dancing on Jewish graves” (as the Šnipiškės project was described in recent years by one of Vilnius’s last native-born Holocaust survivors).

Moreover, the religious equality of peoples means equal respect for the spiritual and burial traditions among different faiths. Christianity, Judaism, and Islam all believe in the resurrection of the dead and the exceptional status of a place of burial. What kind of “Christian” is it who would say: “But that only applies to us alone”? The refurbishment of the Palace of Sports to accommodate the new congress center is to be dismissed simply because it is located in a cemetery—on a plot dedicated to the dead, buried in the faith of being resurrected in their bodies for a new life. Not to mention, all on land duly purchased in perpetuity by the families of the buried.

Virtually all Litvak rabbis around the world, and all other rabbinic organizations in general, disagree with the one Hasidic-based group in London known as the “Committee for the Preservation of Jewish Cemeteries in Europe” (CPJCE) that is brought to various East European cities to give “permissions.” Moreover, 47,000 people from all over the world have signed an international protest petition. Simon Gurevich, elected head of the Vilnius Jewish Community was quoted as follows in a March 2018 article in the New York Times: “The Soviets didn’t build just coincidentally the Sports Palace there, they built it as part of an antisemitic campaign of destruction of Jewish sites. Is this Soviet despotism a part of the heritage we would like to keep?”

We know from the testimonies of the people who survived the Soviet Gulag system that the dead who were exhausted from slave labor at insane mega construction projects, who died of hunger, and cold were namelessly buried on the road or railroad site and we regard it as an inexcusable aberration of humanity. Every year Lithuania equips and solemnly sends a group of young people to the East of the former Soviet Union to visit and honor the Lithuanian deportees’ graves — and so it should. With each year, “Mission Siberia” plays an increasingly important role in national youth education policy. In the noble context of “Mission Siberia,” the project to set up a new national convention center surrounded by Jewish graves in the center of Vilnius is a crime to the integrity of our nation’s future generations.

By not following an honest moral order, we risk losing understanding of what is most important in life and what human civilization is worth. We are constantly changing as we live, but in the end, there will come a time when we will no longer be. Those who will remain will ask what we did before our deaths, with what hope we died, how we buried others, and what we did with their graves. If we now allow the public humiliation of centuries-old Jewish graves in the heart of our inspiring capital city, the scab that this deep wound would leave would become inoperable, and our enemies would be presented with the best possible moral missiles.

What is even more surprising is the explanation by the planners of the Palace of Sports remodeling project that the old cemetery will be “honored” with an additional sign and a monument on the lawn in front of the Congress Center! Thousands of people are buried in the area on all four sides around the Sports Palace. The foundation of the building is itself mixed with bones. When the Soviets built the Sports Palace, the burials on all sides did not disappear anywhere, and it is a cemetery in the true sense of the word. No additional commemorative or “immortalized” sign is even a cosmetic solution to this situation. So let us not fool ourselves. This project is completely incompatible with sincerity, integrity, good will, and our national credibility.

The Soviet monstrosity of a building should be taken down. The people of Lithuania and its capital deserve a new, beautiful, sparkling, and morally clean congress center that will be a pride and joy for us and for people from every corner of the earth. These future plans should not be sacrificed on the pyre of some greedy builders, politicians, or “Jews for sale.” That one group of rabbis from London is now being investigated in the United Kingdom. The media has already reported on the court case underway in Vilnius, too, to which over 150 people have signed affidavits asking for urgent protection of their ancestors’ graves from becoming part of a convention center complex.

Vilnius as a city is in a very beautiful place. Why should we tear apart Jewish cemeteries, profane human remains and humiliate them? The new Congress Center has so many great possible venues in Vilnius, incomparably more suitable than the Old Jewish Cemetery! What prevents the launch of a public competition for architects and urbanists for a new state-of-the-art congress center that will become the object of pride not only of Vilnius but also our entire nation?

We have a wonderful opportunity to present Lithuania and its eternal capital Vilnius as a pinnacle of pride and progressive civilization to all the world. Let us now grab it with both hands.

Some of the visualizations to date for the possible future for the Old Vilna Jewish Cemetery follow. The final one, that of much of the Defending History community, is available with accompanying text in Lithuanian, English, or Yiddish, and reflects, in overall general terms, a vision articulated by Prof. Shnayer Leiman.