Posted on 25 February 2014 by Defending History

VILNIUS—Defending History is making attempts to determine the authenticity of an unverified document (translation here) which purports to be from Lithuanian police issuing notification of a “pre-trial investigation” against a Lithuanian citizen for having written an article referring to alleged Nazi collaborators. More on the topic is available in Defending History in the Collaborators Glorified section, the works of Evaldas Balčiūnas (including an article on the Mr. Noreika = “General Vetra” mentioned in the purported police complaint), the 2012 Brazaitis saga, and the page on street names and university shrines dedicated to Nazi collaborators.

To date, the authenticity of the document has not been challenged from any quarter. Moreover, the incident was followed by a disturbing police letter to a major Lithuanian Holocaust researcher on March 19th.

If the new document, dated 6 February 2014, proves authentic, it would, in our view, be a significant blow to the illusion that all citizens of the European Union, west or east, now enjoy the same high standard of protection of freedom of speech and freedom to disagree with state-dictated historiography. All the EU’s nations deserve high standards of freedom. That one could become involved with police or prosecutors for writing an article about a Holocaust collaborator — the more so when it is about one about whom extensive previous publications exist — is just plain unacceptable in NATO and the European Union.

In addition to the momentous issue of free speech, there is another here just as painful: Why state authorities in the free world would wish to use government resources to honor local collaborators and perpetrators who helped or cheerled the Nazis in exterminating their own citizens of Jewish background. Alas, the degree of local collaboration and participation played a major role in Lithuania having the highest percentage of its Jewish population killed of any substantial prewar Jewish community in Europe. All the more reason to replace street names and shrines, that extend to the heart of Vytautas Magnus University, with the names of the real Lithuanian heroes of 1941: the inspirationally brave citizens who risked everything to do the right thing and save a neighbor, whose bravery is so great that it is hard for many today to fully fathom.

Previously, the powers of the state have been misused to harass Holocaust survivors who spoke out. The most famous case might be the misuse of Interpol in 2011 to disturb survivor Joe Melamed in Tel Aviv, author of the 1999 book Crime and Punishment. The case was covered by Haaretz and the subject of an early day motion in the British Parliament. Another is Dr. Rachel Margolis, still afraid to return to Vilnius at age 92. Insiders continue to believe she was singled out for harassment as “payback” for her 1990s rediscovery and publication of the vital Sakowicz diary on the murders at Ponár (Paneriai).

Real or Fake? A Document Making the Rounds in Vilnius Stirs Discussion

1) Alleged recipient’s address has been blocked out. 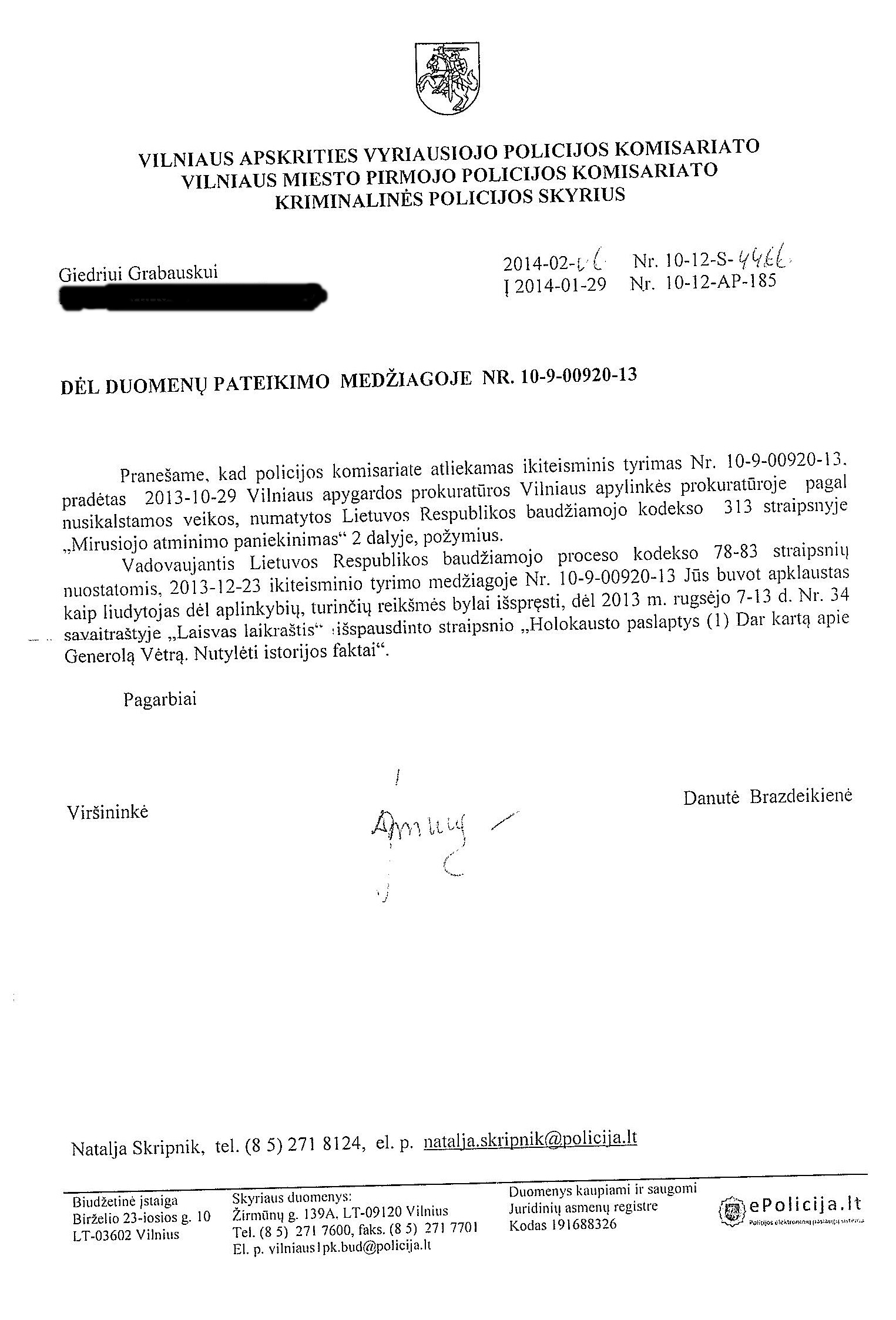 We inform you the police department is conducting pre-trial investigation no. 10-9-00920-13, initiated on October 29, 2013 by the Vilnius district prosecutor’s office of the Vilnius area prosecutor’s office based upon the indication of criminal action defined in section 2 of article 313, “Desecration of the memory of the dead,” in the criminal code of the Republic of Lithuania.

Based upon the rules in articles 78-83 of the criminal proceedings code of the Republic of Lithuania, you were questioned in pre-trial investigative material no. 10-9-00920-13 on December 23, 2013 as a material witness of circumstances significant to the solving of the case, because of the article “Holocaust Secrets (1). About General Vėtra Again: Suppressed Facts of History” published in the September 7-13, 2013 issue, issue no. 34, of the weekly newspaper “Laisvas laikraštis.”