“In accordance with the Estonian constitution and international law, the continuity of state of the Republic of Estonia was not severed by the occupations of World War II, and parliament therefore pays respect to the citizens of Estonia who acted for the de facto restoration of Estonian statehood during the years of Soviet and Nazi occupation. Parliament condemns the repressive policies of the Soviet Union and Nazi Germany as well as the acts of those, who in the service of these governments, committed crimes against humanity, regardless of their nationality and the place of the crimes.”

Per Anders Rudling on the Waffen-SS as “freedom fighters”

A debate with the Latvian ambassador in London

The ambiguity of the legal text serves two purposes. Foreigners will find it impossible to understand the true meaning of the law. Here in Estonia, there is no doubt. It is understood by all that for the first time, with this declaration, the Estonian parliament awarded the status of “freedom fighters” to those Estonians who fought against the Red Army. What the declaration is silent about, is that those who fought against the Soviet army on Estonian soil during World War II did so in Nazi uniforms, having sworn an oath of loyalty to Hitler, were mostly part of the Waffen-SS in Estonia and in not a few cases comprised actual Nazi war criminals and Holocaust perpetrators.

As a result of the international uproar created by the discussions around the bill, the final text makes special reference to those guilty of war crimes. In theory this would eliminate the possibility of rehabilitating Nazi war criminals.

Legionaries at the Forefront

In the history of World War II in Estonia, a central role was played by the Battle of the Tannenberg Line in July 1944 in the Sinimäe Hills. According to pro-Nazi, fascist and far-right folklore, a small number of Estonian SS troops together with their pro-Nazi brothers in arms from Belgium, Norway and Denmark managed to destroy and stop the Red Army arriving from the east. According to this lore, the  “Heroes of the Sinimäe Hills” fought for Estonia’s independence, democracy and for the freedom of Europe and must forever have a place of pride in the heart of every Estonian. In particular, in the frankly pro-Nazi version writings of former Prime Minister Mart Laar, an inflated number of Soviet casualties is reported to enhance the legendary status of the Nazi alliance forces in the critical battle. 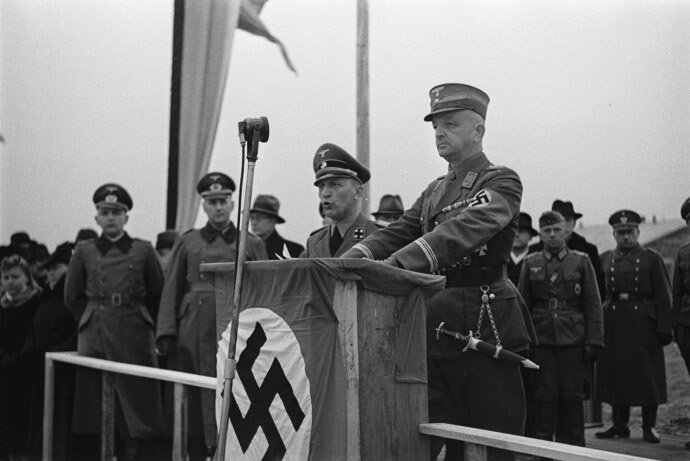 Among those most glorified are the Waffen-SS veterans. Some of their number, Alfons Rebane, Paul Maitla, Harald Riipalu and Harald Niguseks were awarded with the highest medal of Germany, the Cross Knight bearing the Iron Cross symbol.

“ The Sinimäe heroes” are glorified both socially and politically. In Estonia, the first statue to commemorate soldiers fighting for the Nazis was erected in 2002 in Pärnu. At that time, the statue stood for nine days before it was removed by authorities. Then the Waffen-SS veterans received their next statue in Lihula, where it stood for two weeks. In both cases, the Estonian government removed the statues because of pressure from abroad. There were at the time protests from the U.S. Embassy, the OSCE, Russia, and various Jewish organizations. 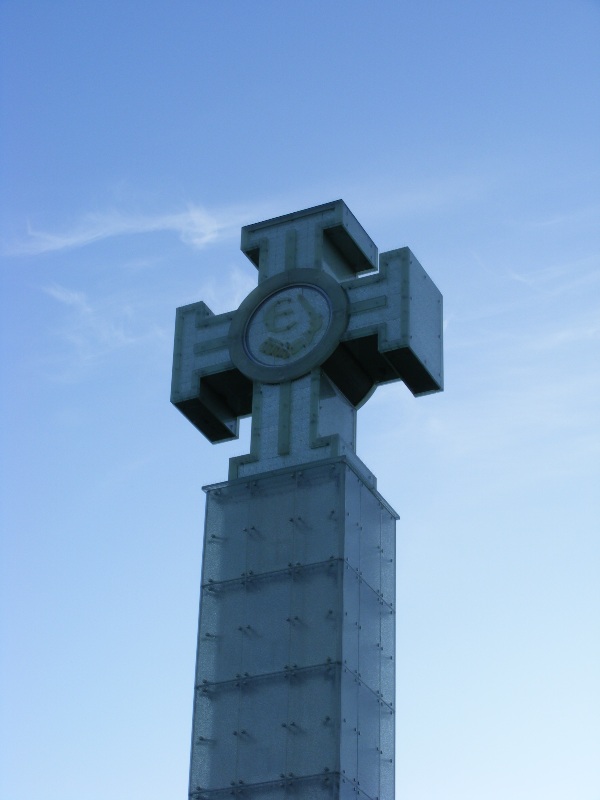 But the most important statue commemorating the Nazis’ local forces stands proudly and undisturbed, at the site of the Sinimäe battle, named the Hill of Grenadier. It is a memorial cross that stands about ten meters (about 33 feet) tall. Estonian neo-Nazis gather with Waffen-SS veterans on this hill every July to celebrate the “victory” of Nazi Germany in the Battle of Sinimäe in the summer of 1944.

In modern Estonian nationalist mythology, the heroic mythology of the 1944 battle is combined with the Estonian Civil War. This analogy was already used by the Nazis in their time. The Estonian Waffen-SS troops took for their emblem the symbol used in the earlier World War I era Freedom War medal. This is the Freedom Cross with the letter “E” letter decorating a hand waving a sword with armor. The same symbol appears on the collar of the Estonian Waffen-SS uniform.

In the summer of 2009 at Freedom Square in Tallinn, which had been Adolf Hitler Platz in Nazi times and Victory Square in the postwar Soviet period, a monument was erected at the cost of 100 million kroons (about 10 million dollars or close to eight million euros).

Formally, the monument is in memory of the “Estonian Freedom War,” but through the symbol in fact later appropriated by the Waffen-SS is clearly bonded in the public imagination and culture with the supposed “freedom struggle” fought on behalf of Hitler’s forces. The opening ceremonies were closely modeled on the openly pro-Nazi ceremonies of the Waffen-SS veterans in Sinimäe. The guests of honor, sitting right next to the president of Estonia, Toomas Hendrik Ilves, were the Waffen-SS veterans. Seated right in front was Harald Niguseks, who had received the Iron Cross from Hitler.

In Estonia the rehabilitation of the veterans who fought for Nazi Germany got underway shortly after President Lennart Meri took power in 1992. First he invited these veterans to join the annual Independence Day celebrations and awarded them medals. But an embarrassing situation arose in 1999, when Estonia re-buried with full honors the Waffen-SS legionnaire Alfons Rebane. His ashes were brought from Germany to Estonia with a grant of 2,500 euros from the state. Although the official representatives of the state did not take part at ministerial in the ceremony in 26th June 1999, Rebane was buried with military honors. Defense Forces Commander Johannes Kert gave the event much local credibility by his presence.

Rebane´s reburial attracted considerable international media attention. Jewish groups sharply condemned the act. Rebane was accused of involvement in war crimes, but no hard evidence has been found. For a long time after the war, Rebane worked in Britain for the intelligence agency MI6 as manager of anti-Soviet operation called The Jungle. The mission failed, and he subsequently moved to Germany where he died in 1976.

Toomas Hendrik Ilves, then foreign minister, robustly defended the state grant of 2,500 euros for reburial. Later, as president he robustly defended the Estonian Waffen-SS warriors as Estonian freedom fighters. According to the President Ilves, the Nazi stamp on these veterans’ records is  nothing but a declaration of a kind of conceptual war against Estonia: “We are witnesses to the information war against Estonia which already reminds one of ideological aggression”.

In Estonia it is generally clear to everyone that the law passed on 14 February 2012, or the “Valentine’s Day Law” (as it was rapidly and aptly dubbed by DefendingHistory.com) adds the level of legal, legislative and parliamentary recognition to the supposed patriotism supposedly entailed by those locals who fought for the Nazis, whether in the Waffen SS or not. Immediately after the passage of the law, proposals were put forward to make a stamp bearing the image of a Waffen-SS officer holding an Iron Cross who is still alive, Harald Nugiseks.

The idea was rejected out of hand by the central post office authorities. 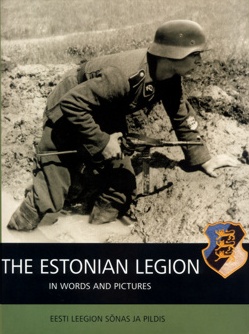 The act that parliament  passed on Valentine’s Day 2012 was a victory for many far right and pro-Nazi forces in society, and also a big personal achievement for  Defense Minister Mart Laar in Estonian politics. Nevertheless, he had to give up his duties as minister of defense for health reasons on 6 May 2012. He is recovering from a stroke he suffered on 18 February, four days after “his”  law was passed.

The new defense minister Urmas Reinsalu has welcomed the Valentine’s Day Law with a publicly stated wish to see in Tallinn “ one day soon” a new statue erected specifically for the “freedom fighters” rehabilitated by the act.