Posted on 5 November 2015 by Defending History


JERUSALEM—The Simon Wiesenthal Center today harshly criticized the website of the Lithuanian Jewish Community for what it termed a “brazen whitewash of the Holocaust crimes of one of the perpetrators of the annihilation of Lithuanian Jewry.”

In a statement issued here by its chief Nazi-hunter and Holocaust historian Dr. Efraim Zuroff, the Center expressed its shock in the wake of a post on the website of the Lithuanian Jewish community which proclaimed that “Lithuanian Military Officer Jonas Noreika Not Guilty of Holocaust Crimes.”

“The post by the Jewish community is a shocking example of its total lack of sensitivity to the Holocaust crimes committed by local Nazi collaborators. Despite acknowledging that Jonas Noreika played an active role in isolating the Jews (by establishing a ghetto in Siauliai) which was an important step in their ultimate annihilation, the community trumpets Noreika’s supposed innocence. Even worse, the Jewish community uncritically adopts the conclusions of Lithuania’s Genocide and Resistance Research Center, ignoring evidence that Noreika played a key role in the mass murder of the Jews of Plunge and Telsiai, as well as of the entire Siauliai region.

“It is indeed a shame and desecration of the memory of the Lithuanian Jews murdered in the Holocaust, when the current community whitewashes the crimes of the perpetrators.”

Partial screen print of the English translation prepared by the Jewish community’s website for its English section follows (as of today the site posts both the English text and the original Lithuanian reposted from Lithuanian media). 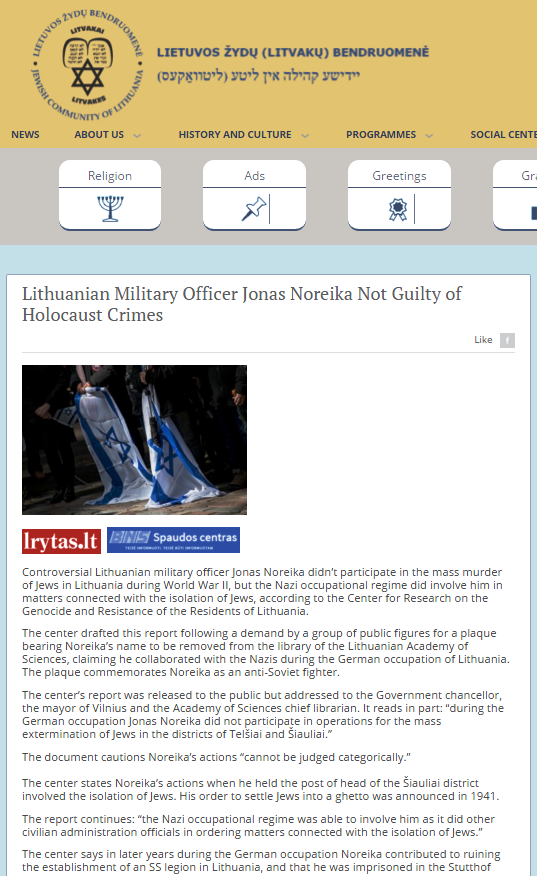