The Nine Lives of Dónal Denham

My good friend and colleague for two and a half years in Vilnius, Dónal Denham, has written a book with the title Nine Lives: The Reflections of a Dedicated Diplomat

. The book is an interesting, fascinating read about an eventful career in the service of Ireland at home and abroad, enriched by an excellent selection of photos that add life and substance to the text. The author also draws a vivid picture of his early formative years in Ireland and England and student years at Trinity College. He writes warmly about his family, not avoiding the pain of personal losses, exacerbated by separation and distance. Diplomats from all countries would subscribe to his tribute to his wife Siobhan (“without whom nothing worthwhile would have happened to me”) who “as an unpaid ‘trailing spouse’ was a treasure beyond measure, largely unrecognized by officialdom.”

So, which are Dónal Denham’s nine diplomatic lives?

In chronological order they are: Paris; Lusaka; Brussels; Washington D.C.; Dublin and Geneva; Dublin and Ottawa; San Francisco; Lithuania and Belarus; and finally, Helsinki. His portfolio also included visits to Mexico, Pakistan, India and Thailand. A truly varied field of operation, and though the basics of diplomacy are acknowledged and applicable all over the world, the diplomat will always face customs, cultures and challenges that are specific for any individual host country. As a dedicated and skilled diplomat Dónal Denham was very much aware of these nuances, and his book gives ample evidence of his capacity to regard challenges and surprises not as insurmountable obstacles but as opportunities. Twice Dónal Denham had to establish and put into operation an Irish diplomatic representation – in Lusaka and in Vilnius. In Vilnius he could draw on lessons learned in Zambia, and after several months of meticulous search the chancery of the Irish Embassy was established at “One Gedimino” (1 Gedimino Prospect), the most prestigious location that you could imagine. Dónal had every reason to be proud of this achievement. I remember well how impressed I was by the premises and by my colleague’s friendly and forthcoming manner when I made my introductory visit to him as a newcomer. During our time together in Vilnius I greatly appreciated his insights, his sense of humour and the human dimension that always was present in his approaches.

Examples from the book are his successful efforts to establish the Suburban Maternity Clinics project in Lusaka, to bring the ratification by Ireland of international HR agreements “up to a reasonable level”, to create the post of High Commissioner for Human Rights, his support for Holocaust survivor and partisan Fania Yocheles Brantsovsky (Brancovskaja) in Vilnius, for Professor Dovid Katz’s struggle against Holocaust Obfuscation by Lithuania and some other East European countries, for Adi Roche, “a living saint if ever there was one”, and her work for neglected children in Belarus. 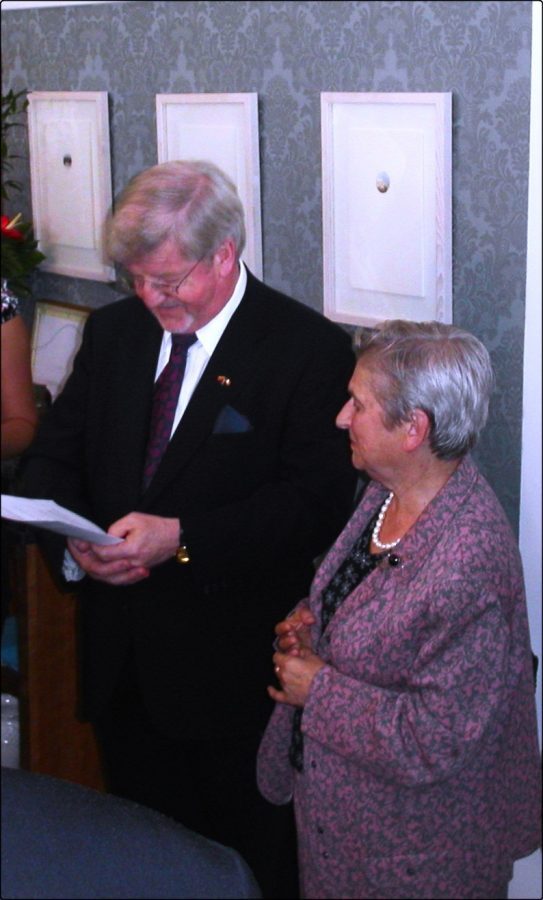 During the 2008 apex of Vilnius prosecutors’ campaign against Holocaust survivor Fania Yocheles Brantsovsky (Brancovskaja), who survived by serving heroically with the anti-Nazi Jewish partisans in the forests of Lithuania, Ireland’s Ambassador Dónal Denham organized a reception in her honour at the ambassador’s residence in a diplomatic gesture that has become firmly  established in European diplomatic history. See Defending History’s Ireland section, as well as pages on Blaming the Victims and, in 2022, on Ms. Brantsovsky’s 100th birthday.

And, of course, the human dimension is also about friendship. Dónal finishes his book by reciting a toast, so well-known to his friends and bringing back happy memories of times spent together:

Steinar Gil was Norway’s ambassador to Lithuania from 2006 to 2011. See more of Defending History’s coverage of his work in the country in the Norway section.