Some eighty people gathered at midday today, in an eerie mix of wind and autumn sun, at the forest mass grave memorial site just outside the town once known in Yiddish as Svintsyánke (or Nay-Svintsyán; now Lithuania’s 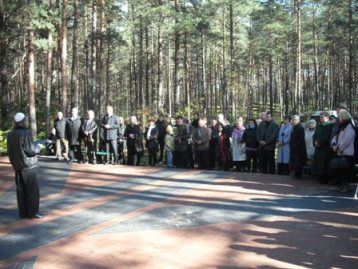 Posted in Cemeteries and Mass Graves, Commemorations for Destroyed Communities, Events, Lithuania, Litvak Affairs, News & Views, Poland, Svintsyán (Švenčionys) | Tagged Holocaust in Svencionys, Svintsyan, Svintsyánke | Comments Off on Gathering in the Forest to Remember the 8000 Jews of the Svintsyan Region