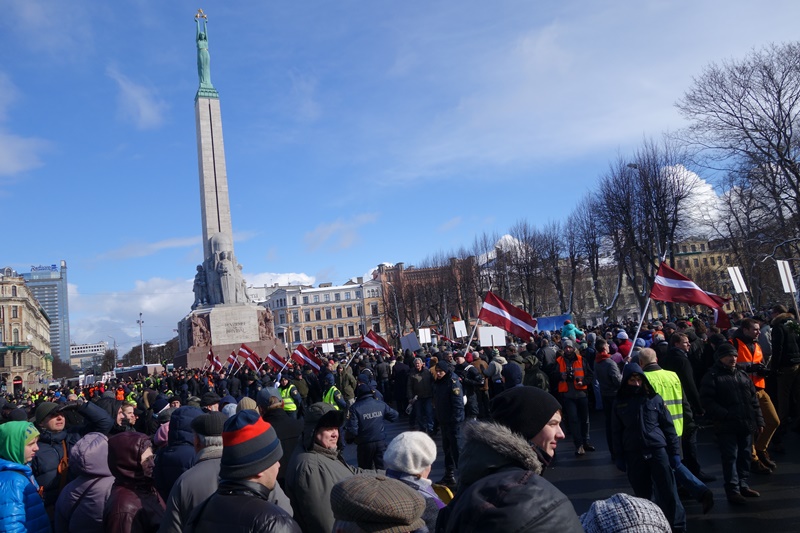 Liberty Monument and the heart of Riga are again gifted to the glorifiers of Hitler’s Waffen SS in Latvia.

ENCOURAGING DEVELOPMENTS (re previous years): Latvian Government advised people to stay away, forbade ministers from attending and sacked the one who did. Latvian MP Nikolajs Kabanovs and journalist Juris Kaža visited the annual “Round Table” Latvia Without Nazism protest conference in gestures of dialogue and reconciliation. Dr. Efraim Zuroff was invited for a private tour of the Occupation Museum and an ensuing open discussion with its directors. British MEP Richard Howitt spoke out; his statement was read out at the conference.

DISCOURAGING: Peaceful protesters were moved to a site much further from Liberty Monument, leaving them unseen and unheard. A bus of (utterly peaceful) German anti-fascists were held at a (Schengen!) border (Latvia’s) for hours. The “Round Table” conference was harassed by manipulated denials of nearby hotels for the tranquil annual event. Four Latvian MPs  (E. Cilinskis, J. Dombrava, R. Dzintars, I. Parādnieks) attended the Waffen SS fest giving it, in 2014, a flavor of state approval taken in tandem with the gifting of the city center and Liberty Monument area.