Posted on 21 August 2010 by Defending History 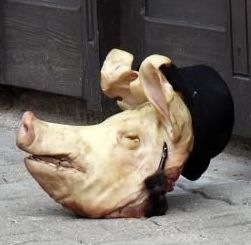 A pig’s head, adorned with a black hat and makeshift hasidic style earlocks, was placed on the pavement right outside the door, within the courtyard of the main synagogue in Kaunas,   Lithuania’s second city, during Sabbath morning services. This caused profound grief to the very small congregation of survivors who pray at the city’s Choral Synagogue, the only prewar Jewish prayerhouse in town that still functions. The service was interrupted as police arrived to investigate. The Lithuanian Jewish Community described it as a neo-Nazi antisemitic attack. The police however told BNS that the incident ‘is still qualified as a disturbance of the public peace’. Moreover, the commander of the Central Police Commissariat Gintautas Dirmeikis told BNS that ‘There are no suspects so far’. Photo by Laimutis Brundza / Kauno diena.

Other reports: Alfa.lt.   Delfi.lt.   Jerusalem Post.   JTA.   YNet.   Some reports mention a star of David carved into the pig’s head. Video by Lietuvos rytas.  Lietuvos rytas article by A. Vinokuras. On 25 August the prime minister finally reacted, expressing hope the perpetrators would be found and punished; an advisor to the PM called the attack ‘a relic from the Soviet past [!]’.  BNS report here in English; Alfa.lt, 15min.lt. Praise  for the PM from Rabbi Andrew Baker. London Litvak starts drive to install CCTV for secutiry at the Kovno synagogue.

With the characteristic verve of Yiddish humor, a ‘dark Litvak joke’ has been spreading among elderly Jewish survivors in town. ‘Yet again, the police cannot find the culprits, because they are still too busy looking for Fania, Rokhl and Yitskhok’ (see here and here).