Posted on 9 February 2017 by Defending History

This year’s annual events organized by the Lithuanian Jewish Community to mark International Holocaust Remembrance Day were held on the evening of Thursday, 26 January, on the eve of the officially designated day that falls on the 27th of each year. This year, the official Jewish Community organized two impressive public events to mark the occasion, which is important for every Jewish person in the country, where about 96% of the Jewish population was annihilated during the Holocaust.

The first event was held in the Choral Synagogue on Zawalna (today’s Pylimo Street), starting 4:30 PM. Attendance was over one hundred and fifty. Upon entering the shul, each participants received a “yellow Jewish patch” similar to those that Jews were compelled to have sewn on to their garments by Nazi orders to publicly mark them as Jews.

The official guests, ambassadors and other staff from foreign embassies in the Lithuanian capital made up a significant component of the meticulously organized event. At front, a large screen was set up to show an exhibit of photographs from the Auschwitz extermination camp. Of course, Holocaust Remembrance Day marks the liberation of Auschwitz by the Red Army on January 27th 1945.

There were brief welcome addresses by Simas Levinas, head of the Religious Community, and Faina Kukliansky, chairperson of the Jewish Community of Lithuania, followed by the customary call to six local people, including Holocaust survivors, to come up to the dais and light a candle each in memory of the victims. Three of them, including Ms. Kukliansky, used the opportunity to say a few words and to express their solemn thoughts and feelings about the tragic fate of their own family members killed during the Holocaust in Lithuania. 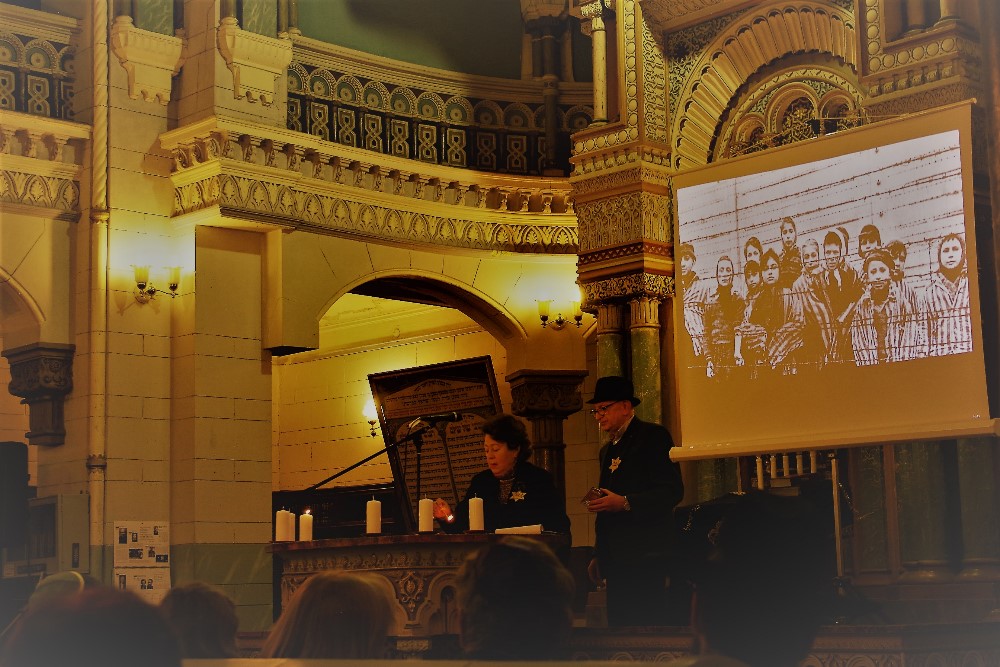 After the prayer, the participants and visitors were invited to light and place more candles. Kaddish was recited by the community’s regular Vilna shul cantor Shmuel Yusem concluding the formal part of the proceedings.

The general theme of this year’s World Jewish Congress global campaign to remember the Holocaust is “We remember”. In some countries, the signs produced and displayed with these words were multilingual, and in some instances, there was enough sensitivity to ensure that Yiddish, the language of the victims, was included too.

In Lithuania we should be clear, I feel, about what we do as we strive to keep the Holocaust alive in public memory. In Lithuanian, there is a single word, aukos, for both “victims” and “sacrifices” (or even in some cases “losses”) and the understanding of which of the two senses is meant can depend on context or the listener’s own conceptual framework. But this problem is so to speak “natural” in so far as there are many words in dictionaries with double or even triple meanings in many languages.

But there is also a “special” problem in our country in that this semantic dualism can be used to willfully engender confusion by the prevalent Double Genocide rhetoric,  for example by declaring perpetrators to also be victims. This is something that we have, alas, seen on many occasions from various august commissions and even scholars who should know better. There is the Double Genocide industry with its promoters, whose raison d’être is to give rise to as much obfuscation and confusion about the Holocaust as possible, including the so-called Red-Brown Commission and people around it who demand investigations into Holocaust survivors who survived by joining the anti-Nazi Soviet-sponsored partisans, and who conversely consider the perpetrators of the Holocaust to be ipso facto victims of the Soviet regime and therefore also “victims.” Given its state sponsorship this movement is gravely endangering the honest and honorable commemoration of the Holocaust in this part of the world.

And then there are those like the priest R. Doveika who  are eager to serve the perpetrators with priestly absolution and name them victims of mysterious powers of evil. They name perpetrators as “aukos”, meaning “victims”. Incidentally at some future Holocaust studies conference it would be worthwhile to include a paper or session on the natural and the nefarious double use of aukos in an assortment of contexts.

I approached a group of young Lithuanian pupils who came in their tidy school uniforms and beautiful ties in the national tricolor, and I asked them why they came to join the Holocaust Remembrance Day event. There were, to be sure, different answers. But one common, and heartening theme, concerned the relation between the unspeakably tragic fate of our own city’s Jews and our city’s very living essence, and this multiplied by the hundreds of towns and villages in the country that had a substantial prewar Jewish component.

To understand one has to keep in mind something very unpleasant, namely that children, women, men, young and aged alike, were taken to a pit outside their hometown of generations, and brutally killed and buried in the pit. The vast majority of Lithuanian Jews were murdered as communities. Those killings took place the period of around five months from the summer to near the end of 1941, and were part of the “facts” that fed into the Nazis’ thereafter proceeding to formulate the Final Solution at the Wannsee Conference in January of 1942. This was well before the mass exterminations at the infamous extermination camps.

The list of mass murder sites in Lithuania is long, at around 230 sites all over the country. There are twelve clearly identified mass murder sites in the Vilnius area alone. As time passes, and survivors and witnesses go the way of the world, it becomes ever more critical to speak directly and clearly and honestly at these sites, in order to really remember. 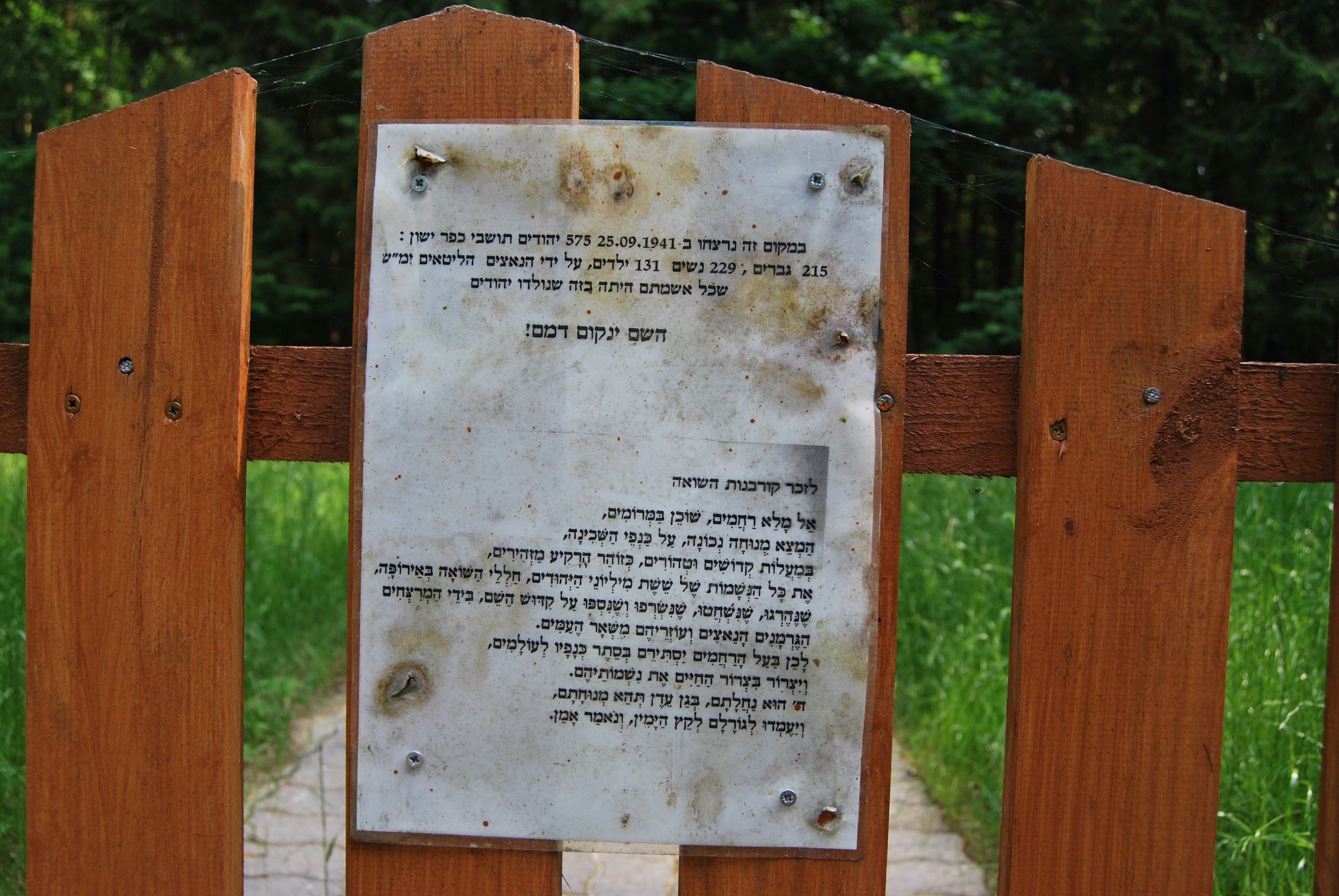 Photo of the text of the Eyl móle rákhmim prayer text amateurishly printed and afixed to the wooden gates of the fence around the site of mass murder site in Yashún, 30 km to the southeast of Vilnius. Image is from the author’s visit to the site in July 2016.

The event was followed by a second major event this evening that this report does not cover. Held at the Jewish Community Center at Pylimo 4 it was a meeting with the famous historian of Polish Jewry, Professor Antony Polonsky of Brandeis University. His three volume history of the Jews of the region has just been translated into a single volume Lithuanian edition. It is an important book that we hope to come back to another day soon.