Volhynia and the Noxious Weed of Antisemitism

Posted on 30 October 2011 by Defending History

During my dissertation research in Rivne, I’ve been going through a number of contemporary Volhynian newspapers for articles on a range of historical matters. As a historian of the Second World War, I do not tend to spend as much time with contemporary publications, yet at the end of the day, every activity and research experience is a lesson in some manner when you’re “in country” working.

I spent time working through what I already understood to be the right-wing nationalist newspaper, Volyn’, which is a Rivne oblast’ level paper that comes out once a week. The paper sees itself as the reincarnation of the Nazi occupation newspaper of the same name, which was edited by Volhynian writer Ulas Samchuk, if that tells you anything about the orientation just to start out.

When one orders a run of a paper, you get an entire year at once bound together. I’ll now take you through some of what I saw in the collection for 2002.

1) First, we have an article about then President Kuchma and his ties to corruption. The article, “The Ukrainian Nation against Kuchma’s Citizens (or People)” is accompanied by a banner from an unknown protest. I think it’s pretty obvious what the intent is here though. Also, it is important to know, many nationalist “critiques” of post-Soviet governments have played the Jewish card by claiming that “Jews”, namely Oligarchs, conspired to take over their countries after the fall of the Soviet Union. Government officials are then criticized for being in cahoots with the Jews. One doesn’t need to look too far to make the connection here: 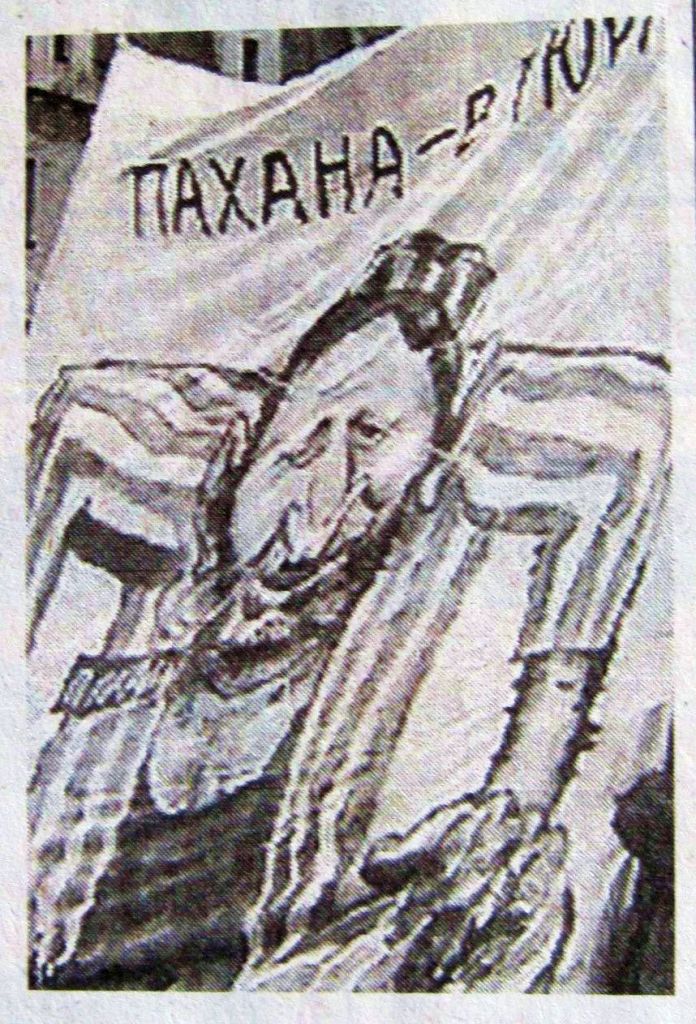 2) I then came across an exposé on the Mideast. I should start by noting there are almost no articles on international politics in this newspaper. The tidbit is entitled “Zionism and Fascism are One in the Same”, followed by the full length piece, “Zionism: Ubermenschen Ideology”. The larger piece is written by the president of MAUP University — otherwise known as the “university of hate” for its well-known ties to Nazi groups. It also happens to be the largest private university in Ukraine and has recevied the support of many prominent politicians and public figures. The article is replete with some rather offensive language and of course, quotes from the American neo-Nazi David Duke. I, for one, have no issue with criticizing the state of Israel, and do so myself, but I don’t think comparing Zionism to Fascism is a legitimate mode of analysis:

3) Finally, I then came across an article, “The Myth of Ukrainian Antisemitism”. Let’s just say that my jaw dropped open. You know the article isn’t off to a good start when it begins by noting that the vast majority of deputies in the Ukrainian Rada are Jewish and over 90% of the “specialists” in the banking industry are also Jewish. Read: Jews control the government and economy of Ukraine. I’m not sure who conducted those “surveys” either. I’m not going to waste my time translating the rest of the text, since the reader can get the picture… 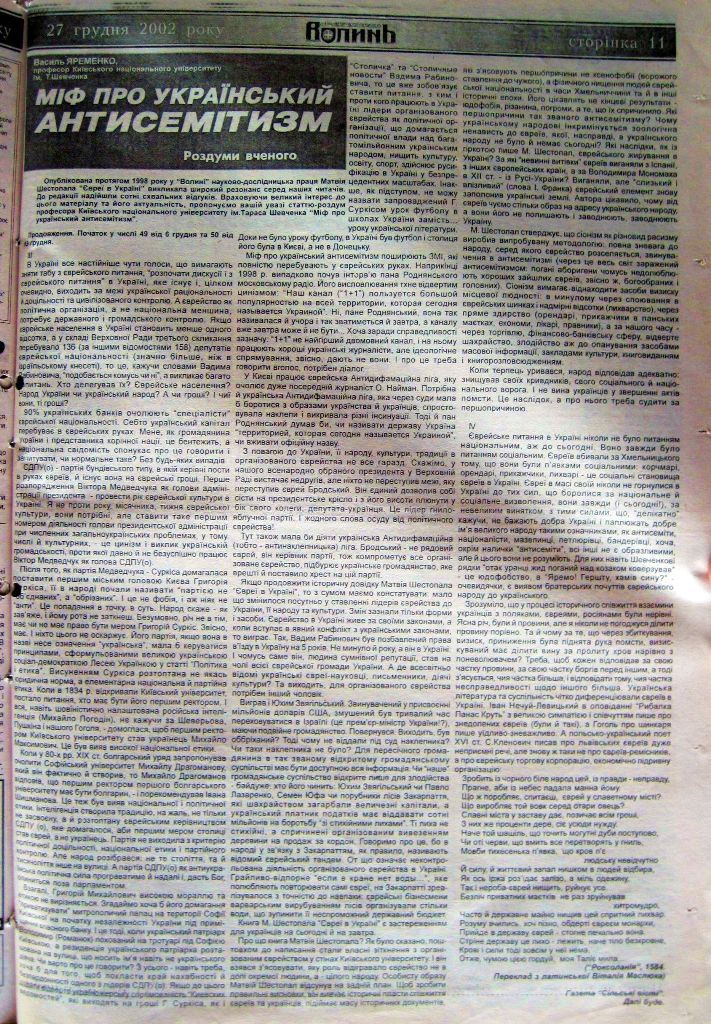 To recap, we have an article about the corruption of Kuchma, accompanied by a picture of a Jew with a giant nose to imply he’s in bed with Jewish oligarchs, then an article comparing Zionism to Fascism, and finally, a piece defending Ukrainians against claims of historical antisemitism by repeating antisemitic and racist allegations — all in the same year’s publications. I guess we could say Volyn’ is certainly carrying on the tradition of Samchuk’s Nazi newspaper.

The penchant for being openly antisemitic and defending oneself against accusations of antisemitism at the same time beautifully demonstrates the warped logic of right-wing hate in modern Europe. The only difference between this current publication of Volyn’ and the wartime version of it is the wartime version would not have bothered running the last-mentioned article to defend itself. Instead, it took pride in its hatred of Jews.

The real danger in articles like “The Myth of Ukrainian Antisemitism” is that the authors seek to legitimize irrational hate and racism through the semantics of liberalism and scientific qualification. Instead of “The Jews are evil and have killed millions of Ukrainians, now it’s payback time” it morphs into something along the lines of, “Well, we don’t hate Jews, we simply believe that research shows that they have taken advantage of Ukrainians over the years and we simply ask them to participate in our new state in the way of our choosing or they should leave.” Ironic, of course, since Jews constitute about  2% of the current Ukrainian population. For more in this direction, check out the activities of the right-wing party, Svoboda.

As for the future life of antisemitism in Ukraine, we can turn to the words of US President William Howard Taft for guidance: “Antisemitism is a noxious weed that should be cut out. It has no place in America.” The question is who’s going to do the weeding here in Ukraine.

This post is a modified version of one that appeared in  Riding the Third Rail: History and Politics from Near and Abroad.

Jared McBride is a PhD candidate in the History Deptartment at UCLA and is currently researching a dissertation on the history of the Nazi occupation in Volhynia and Polissia.