Professor Leiman is the author of a number of major studies on the old Vilna cemetery, most recently a detailed response to the lay-leader head of the Jewish community, and a study of the inscriptions on grave-houselets and numerous headstones. Though a strictly scholarly work, the specific texts from the cemetery, and their layout, discovered and brought together in the study, speak ipso facto to the possibilities of reconstructing them in a dignified cemetery memorial park that has been called for by rabbis around the world for the site (see e.g. the parallel ideas offered by the Central Rabbinical Congress of the USA and Canada, Dr. Bernard Fryshman, and a delegation of the world’s leading Litvak rabbis).

“Woe to such a humiliation of the dead, and at the same time, insult to the living”

This 1935 document from the Vilna Gaon synagogue in Tel Aviv (facsimile below), protesting the then Polish government’s plans to desecrate the cemetery, was in fact revived and recirculated by the synagogue last summer as the 2015 document expressing the same sense of horror that any government would contemplate a convention center on the site one of the most sacred sites of East European Jewry.

The publication of the 1935 Tel Aviv document in Hebrew, below, is a powerful complement to the 1935 Yiddish poster issued unanimously by the Vilna Board of Rabbis, recently discovered by Vilnius Jewish community member Ruta Bloshtein and published on these pages earlier this week. 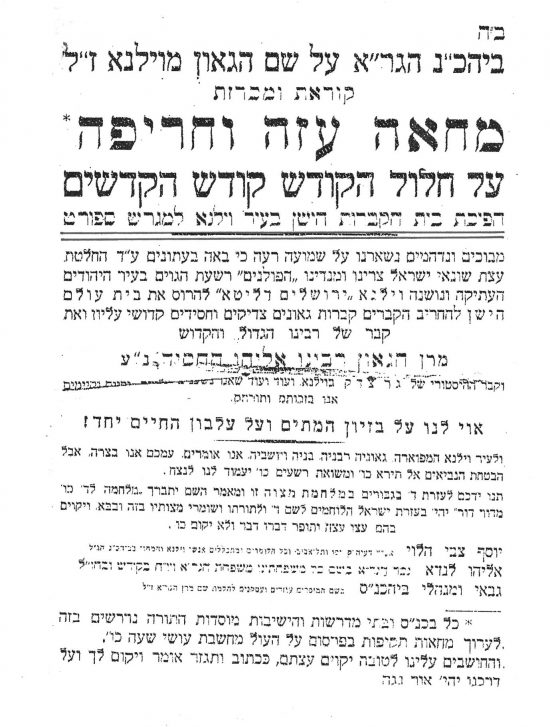