Posted on 1 April 2011 by Defending History 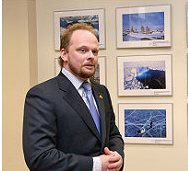 Kevin Hamilton, Canada’s chargé d’affaires at its embassy in Vilnius, published a bold letter today in the daily Respublika, in response to a typically homophobic article in the popular newspaper. The original article (published 25 March), in the spirit of contemporary East European far-right discourse, tried to intentionally confuse Equal Rights for sexual minorities with pedophilia, and to give the impression that Canada supports the latter too.

Moreover, the force of his letter compelled Respublika to issue a rare (if rather half-hearted) retraction, printed in the form of a reply underneath his letter. For a sampling of Respublika’s homophobia and antisemitism, see an image of their 2009 front page caricature of The Jew and The Gay holding up the world (here), and, the way in which the editor handled criticism of that effort (here).