Over the weekend, foreign visitors discovered offensive desecrations at Ponár (Paneriai), the mass murder site of 100,000 people during the Holocaust, among them 70,000 Jews of the Vilna region.

One major monument was spray painted with a swastika and the Russian for ‘Hitler was right’, all in red. It was signed ‘Solomon’, the pseudonym of a ubiquitous graffiti artist who had not been known previously for antisemitic attempts, leading to suspicion that use of the name could be a decoy. It was likewise widely thought that the use of Russian rather than Lithuanian was a decoy, as well as a likely slight directed at the country’s tiny Jewish community, which antisemitic attacks frequently accuse of disloyalty. 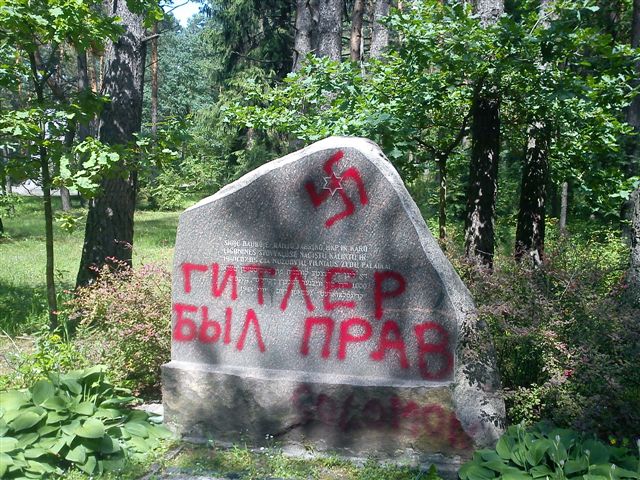 ‘Hitler was right’ (in Russian)

The large central memorial was defaced with a drawing of a penis along with a vulgar phrase in Russian about oral sex and 128 million, the sum (in Lithuanian currency) that the parliament recently allocated to restitution of communal Jewish property over a ten year period (to start in 2013). The text featured a derogatory term for Jews, here at the very spot where Vilna Jewry met its gruesome end during the Lithuanian Holocaust, mostly at the hands of ‘patriotic rebels’ who are this season being honored by the Lithuanian government on the 70th anniversary of Hitler’s invasion.

The Russian text on the monument translates: ‘A penis [vulgar term]  for you in the mouth, and not 128 million litas, Jews [vulgar term]!’ 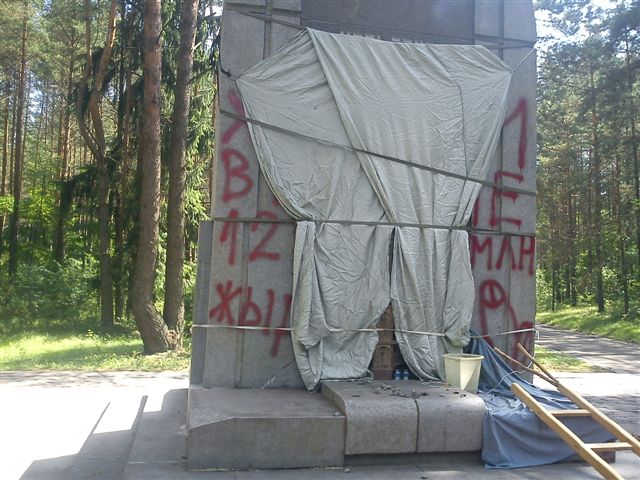 Rapidly covered over, but not entirely. . .

There has not been a word of condemnation or concern from any public official.

The statement issued by the Simon Wiesenthal Center emphasized the nexus between such endeavors as the recent conference in parliament (details here and here) at which Lithuanian nationalist Holocaust massacres, particularly in the days before arrival of German forces, were denied, leading to an atmosphere of delegitimization of the Holocaust, opening the door to a kind of open season by less savory elements. The statement appears on the SWC’s website, with photo credit to DefendingHistory.com.

In antisemitic discourse, the Holocaust is not seldom recast as a Jewish or western plot to discredit the country. During this season’s seventieth anniversary of Hitler’s invasion, leading politicians and academics have referred to the launch of the Lithuanian Holocaust by the Lithuanian Activist Front and other groups as a noble rebellion against Soviet rule (a ‘rebellion’ comprising the outbreak of massive violence against Jewish citizens, while the Soviet army was fleeing the German invasion, not these ‘rebels’).

The continued employment of a neo-Nazi march leader and public antisemite as a ‘chief specialist’ at the country’s Genocide Research Center is another current example of the growing, and deeply disturbing relationship between the ‘high-end’ Holocaust obfuscators in government, academia and the media, and the ‘low-end’ practitioners of neo-Nazi acts, legal (such as the recent neo-Nazi march, for which a permit was granted) or illegal (such as the desecration of Holocaust monuments).

There is no mention of Ponár (or the Holocaust) at the Genocide Museum in central Vilnius.

Nor have there been any known attempts to overturn the 2010 court decision legalizing public swastikas, which has served as an impetus both for legal neo-Nazi marches featuring swastikas, and for their frequent illegal uses.

There is much disappointment that yet again there was no spontaneous, rapid reaction from leading politicians or intellectuals (including those in the ‘Judaic industry’), and no urgent calls from police chiefs giving incentives for people to come forward with information.  If there will once again be a cosmetic response much  later on, in reaction to foreign diplomats’ and organizations’ entreaties, it will again be a signal from on high that the ongoing ‘work of the patriots’ is quite acceptable.

Leaders of the state-run Jewish museum, which also runs the small on-site museum at Ponár, tried hard to suppress the news of the attack and the photographs that appear with this article. There was a rapid clean-up job and no public comment from museum officials or academics.

The only public statement calling on the state to take such desecrations seriously came from the Jewish Community of Lithuania.