Norway’s Ambassador in Vilnius Stands Up for Human Rights

Posted on 24 March 2010 by Defending History

Norway’s ambassador to Lithuania HE Steinar Gil has emerged as a Baltic region champion of human rights, at a time when the Lithuanian government continues its gestures of support for the March 11th neo-Nazi marchers (parallel to Latvian leaders’ stout defense of the March 16th Waffen SS march in Riga). Speaking at a March 19th forum on ‘European and Lithuanian Values’ at the Lithuanian parliament, Ambassador Gil remarked for the record: ‘Every foreigner in Lithuania noticed this march, where the participants were shouting “Lithuania for Lithuanians”. We were shocked.’  The ambassador also pointed out politely that fifty parliamentarians had signed a petition to ban the Baltic Pride gay-rights parade. He asked: How many had spoken up against the nationalist march? He added that every person with respect for herself or himself and for her or his country should condemn this kind of manifestation.  Others who have spoken up include Irish ambassador HE Dónal Denham; UK ambassador HE Simon Butt; and Lithuania’s sole Liberal member of the European Parliament, Prof. Leonidas Donskis.

Diplomatic sources tell Holocaust in the Baltics that even measured expression of difference of opinion on ‘mere’ human rights issues is sometimes deemed inappropriate when it comes to a NATO and EU ally at the eastern reaches of the alliance. The result has been likened to a veil of timid silence among some western powers when it comes to human rights, including freedom of speech.  Neo-Nazism, antisemitism, Holocaust revisionism (with ongoing defamation of Holocaust Survivors and campaigns for red-brown resolutions in Europe), racism and homophobia are running amok, disseminated by elites in or close to state agencies, who continue, at the same time, to invest heavily in promoting as cover-up disingenuous ‘Jewish’, ‘Yiddish’, ‘Anti-Racism’, ‘Tolerance’ and ‘Anti-antisemitism’ events for the benefit of naive foreign visitors (including so-called UJIs – ‘Useful Jewish Idiots’), who are crowned with embellished status, lavish welcomes, and assorted favors. The perfectly legal ‘new swastika’ that duly outwits the June 2008 ‘equal ban on Nazi and Soviet symbols’ has become emblematic of the moment.

Instead of condemning the neo-fascists, Lithuania’s prime minister Andrius Kubilius proceeded to attack… the Norwegian ambassador (analogous to the Latvian foreign minister’s rounding on Dr Efraim Zuroff of the Wiesenthal Center, instead of expressing the slightest regret over the Waffen SS march in his own capital, → below, 16 March 2010). In his statement, the Lithuanian PM trivialized neo-Nazism, denying that racism and homophobia might be a problem, and failing to see it as unfortunate that the permit for the neo-Nazis’ march was obtained by a senior member of his own party who himself participated (→ below, 23 March 2010).

The Norwegian ambassador’s voice had a rapid beneficial effect on Baltic democracy. After a hopeless silence, Lithuania’s opposition Social Democrats issued a statement on March 23rd criticizing the government’s ‘violations of human rights’ (English translation here). The concern of foreign ambassadors is duly noted. Regrettably, however, the statement omits the J-word and ignores the antisemitic and Holocaust-revisionist aspects of the government’s policies. The state’s targeting of Holocaust Survivors via kangaroo ‘investigations’ and state-sponsored defamation in the absence of any charge is a gross violaton of human rights, and it would be a huge benefit to the region for loyal opposition groups to speak up, especially as the persecution of Holocaust Survivors who joined the anti-Nazi resistance was recently the subject of an acute letter of protest to the Lithuanian prime minister, signed by five senior members of the US House of Representatives, including Howard Berman, chairman of the House Foreign Affairs Committee. 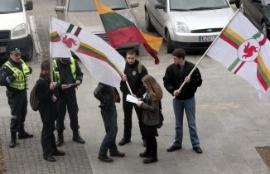 On 26 March, a group of neo-Nazis protested outside the Norwegian Embassy in Vilnius, on the plaza spanning Kalinausko and Basanaviciaus streets, flaunting flags featuring the Lithuanian colors surrounding the modified swastika. A day later, Norway’s ambassador became a target of the mass circulation daily Respublika, which proceeded to demonize him with a huge unflattering photo which appeared with the paper’s report on the fascists’ demonstration at his embassy (→ below, 27 March 2010). English translation.

Meanwhile, the civic debate inspired by Norway’s ambassador began to develop. Although the state’s continuing violation of Jewish rights is still a taboo topic, the generic issue of intolerance instigated (or cheerfully tolerated) by the government is gaining traction as a matter for legitimate dialogue. On 27 March, a typical ultranationalist statement blaming ‘Russia’  for all manifestations of Baltic intolerance was offered by MP Vilija Aleknaite-Abramikiene (English translation here). A cogent response was published by Vilnius University’s Dr Mindaugas Kluonis (English translation here). He makes the point that even if the KGB were responsible for acts of  intolerance in the Baltics, it would be incumbent upon proper leaders to speak up clearly against such acts; indeed it is the intolerant elites, including leading political figures who are the ones doing the damage to their country’s image. Hopefully soon, someone in the intellectual community will respectfully challenge the state’s policies on Jewish issues, including the  defamation of Holocaust Survivors;  red-brown resolutions and state-sponsored revisionism;  neo-Nazi parades and legalized ‘remake’ swastikas; ploys to sabotage restitution;  frequent 1930s style mass media hate-fueling caricaturization of the Jewish people (that typically goes unchallenged). To date, expressions of a Second Opinion have generally been limited to the Jewish Community of Lithuania, Holocaust Survivor groups and foreign diplomats and organizations (on defamation of Survivors;  on the red-brown resolutions;  on state-sponsored red-brown commissions). Encouragingly, some bold independent voices of citizens have begun to be heard too. It is imperative that the slide in free speech in the region be reversed as a matter of genuine urgency to the European Union and the Western alliance. 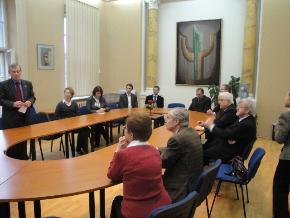 Back in November 2009, Ambassador Gil organized a walking tour of the Vilna Ghetto led by Holocaust survivor Fania Yocheles Brantsovsky, librarian of the Vilnius Yiddish Institute, after parliamentarians and the country’s leading news portal defamed her as ‘under investigation for mass murder’ for having survived the Holocaust by joining the anti-Nazi resistance. Neither the government nor her own employers have since offered a single public word of reply to the baseless and antisemitically motivated calumny. Ambassador Gil organized the walking tour in partnership with the Jewish Community of Lithuania, where he led a seminar prior to the excursion (details → below, 26 Nov 2009; cf. also report at 28 Oct; see also: Responses).

This entry was posted in Human Rights, News & Views, Norway, US State Dept Manipulated?. Bookmark the permalink.
↑ Return to Top