Posted on 27 March 2010 by Defending History 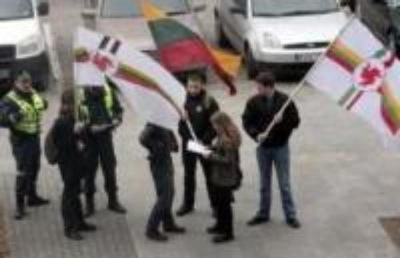 The mass circulation daily Respublika publishes an unflattering photo of the Norwegian ambassador on p. 2 along with its report of the protest delivered to the Norwegian Embassy by a group of participants in the recent neo-Nazi parade. The protesters demonstrated outside the Norwegian embassy in Vilnius on 26 March with flags including the modified swastika flaunted during the parade. Online version of the Respublika report. English translation.

This entry was posted in Celebrations of Fascism, News & Views. Bookmark the permalink.
↑ Return to Top