VILNIUS—A massive new construction site is being dug up next door to the Soviet-era Sports Palace building in the Šnipiškės section of Vilnius. The former Sports Palace, now the subject of intense international debate over plans for a 25 million dollar conversion into a national conference center, itself “indisputably rests in the middle of the former cemetery,” as confirmed by the United States government a decade ago. But what is unknown is where that may leave this bordering site, which may or may not lie outside various hypothesized boundaries of the old Vilna Jewish cemetery, in use from the late fifteenth century to the 1830s. The last generations of pre-Holocaust Vilna Jewry called the cemetery Piramónt.

The massive new construction site is surrounded by high fencing and guarded assertively around the clock. According to witnesses, earth dug up is immediately removed under cover. It is not known if it has been checked for human remains by a reliable financially non-interested party, or to where the earth has been removed and separately preserved for potential future analysis in the spirit of honesty and transparency.

These photographs were taken today by Julius Norwilla: one of the site, one of the sign announcing the project of new apartment buildings to go up thereupon (the apartments are advertised on the web). Without any mention of the issue of the historical cemetery or the fate of any human remains unearthed, the sign helpfully goes on to chronicle what has been removed by the project: maples — 2 units; poplars — 8 units; spruces — 2 units; birch — 2 units; and another tree of the wider maple family — 1 unit.

The two apartment buildings constructed on the sports palace’s opposite side a decade ago were determined to lie right on top of the old cemetery and innumerable human remains. Today they house apartments, offices and a branch of SEB bank, among other businesses. 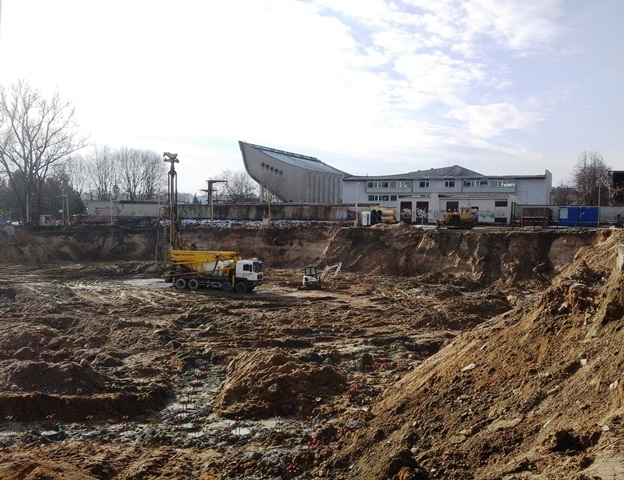