Posted on 25 February 2013 by Defending History

In the meantime, Professor Fridberg was also attacked in a number of postings by Ronaldas Račinskas, executive director of the “International Commission for the Evaluation of the Crimes of the Nazi and Soviet Occupational Regimes in Lithuania” (known for short as “the red-brown commission”). Most sensationally, Mr. Račinskas defamed the Vilnius-born Holocaust survivor on the official website of the state-supported commission (image here; report and our own reply here).

The full chronology, starting with a November “double genocide” conference in Vilnius mounted by the red-brown commission (more links here), can be followed in English by viewing Professor Fridberg’s articles in chronological order (i.e. upwards) in the Pinchos Fridberg section of Defending History.

This article was first published by Professor Fridberg in Russian in Zman.com. The following translation, by Ludmila Makedonskaya was commissioned by Defending History, and it appears with Professor Fridberg’s permission, and with Defending History’s responsibility for the translation. The English text was republished in the Algemeiner Journal in New York on 3 March 2013. Readers of Russian are referred to the original text. In any case of doubt or nuance, it is the original Russian text that is authoritative.

There is reference in Mr. Račas’s blog, Mr. Račinskas’s various postings, and indeed, the reply below, to an open letter by the Telšiai history teacher Ms. Janina Bucevičė (in essence cited in Mr. Račas’s blog). Defending History is an open forum that respects the right of reply. We therefore published the English version submitted by Ms. Bucevičė (with only stylistic editing approved by the author, mostly replacement of “lies” with “untruths” and other concessions to civility). Here, I would like to take the opportunity to briefly reply to the well-intentioned teacher: She was somehow grossly misinformed that Professor Fridberg had denied the existence of Lithuanian rescuers in general. To anyone who knows Professor Fridberg and the environment of Lithuanian Holocaust rescuers’ families, there could be no greater nonsense; it is well known that Fridberg is one of the region’s staunchest achievers for their recognition and for practical support to reach them. He was politely correcting a historical error concerning a reputed single rescuer family of 43/44 people described at the November conference in great detail.

It is most likely that Red-Brown Commission circles are targeting Professor Fridberg for his remarkably courageous public statement of opposition to the commission’s support for Double Genocide politics, the first point he makes in his now classic article, “Instead of the Truth about the Holocaust — Myths about Saving Jews.”

On December 13, 2012, the Russian-language Zman.com published my article “Instead of the Truth About the Holocaust — Myths About Saving Jews.” It was republished by a number of periodicals, and appeared also in Lithuanian and English. It is important that the article was published also on the official website of the Lithuanian Jewish Community. 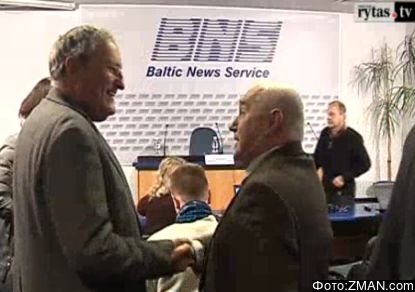 Dr. Efraim Zuroff (left), director of the Simon Wiesenthal Center’s Israel office and this article’s author, Professor Pinchos Fridberg, a Holocaust survivor in Vilnius who has worked for years for recognition and support for Lithuania’s Righteous Among the Nations who rescued Jews during the Holocaust.  Photo is from the press conference at BNS Vilnius chaired by Dr. Zuroff on 15 February 2013.

In it I described how from the platform of the European Forum “United Europe — United History” held last November at the Lithuanian parliament, the deputy director of the “International Commission for the Evaluation of the Crimes of the Nazi and Soviet Occupation Regimes in Lithuania” and its organizer of educational programs, Ms. I.Vilkienė, presented as fact a myth about a certain Lithuanian family who had supposedly itself saved 43 (forty-three!) Jews “in a huge bunker, dug with their own hands, for three years.”

Instead of an immediate public apology for having provided unreliable information at an international conference on this very subject, and closing the matter, various parties started looking for a way to discredit me personally.

But what for? I only reproduced meticulously the content of Ms. Vilkienė’s speech (including a full audio recording for those who understand Lithuanian). The only thing I can really be “corrected” on is the understatement of the size of the bunker. In fact, it was, in Ms. Vilkienė’s speech not just huge, it was, in the deputy director’s speech to the international conference “huge-huge” (Lithuanian: didžiulį didžiulį)…

I am convinced that further escalation of the issue in the press could cause irreparable damage to the image of Lithuania. And the blame for this will fall on those who are trying to defend the “honor of the regime” by any means.

There are unique documents in my possession, including four DVD discs with video recordings of all the November 2012 forum meetings. They make it easy to confirm the accuracy of all the quotes. The exact same discs were sent to the European Commission as a record of the event. Before writing the article, “Instead of the Truth about the Holocaust — Myths about Saving Jews,” I made a thorough investigation. It is all reminiscent of a well-known Russian tale “The Turnip.” The dog pulls the granddaughter, the granddaughter pulls the grandmother, the grandmother pulls the grandfather, grandfather pulls the turnip … I found the phone numbers and moved along the chain. I can confirm every word.

I repeat for the last time: there never ever existed a Lithuanian family, which “had saved 43 (forty-three!) Jews in a huge bunker, dug with their own hands, for three years.” This is what I said earlier. Only a court trial can determine whether there are elements of slander in my statement (as has been implied in some published responses). I bear no responsibility for the ensuing nonsense my statement provoked and the spam being sent around to the media by various parties.

On February 10th, two months after my article “Instead of the Truth …” was published — an open letter of a history teacher Ms. Bucevičė, appeared on the blog Racas.lt (also available in English), accompanied by a commentary with a very characteristic title:

“Most Charming Jewish “Professors”: Your antisemitism has Already driven everyone up the wall: dedicated to Pinchos Fridberg.”

All the quotations here and below are translated from Lithuanian. The story of the letter’s publication is described in my article, “Chronicle of the Provocation in Pictures” (also available in English).

Let me quote the last paragraph of this article: “I cannot provide the photo for this comment, as the settings of my camera do not reproduce vulgar vocabulary.”

I would never stoop to reply to the author of the above mentioned opus, if I had not learned by accident that the blogger Račas is not just a journalist, but also the head of Baltic News Service — BNS. This is why I simply have to cite samples of his language.

About Efraim Zuroff Mr. Račas has this to say:

“If Israel was really concerned about reconciliation and good relations, E. Zuroff should have been in jail alongside ‘Hezbollah’ terrorists long ago. For life, and without the right to pardon.”

After such a proposal, the “professor” (the quotation marks belong to the author of the comment) comes up with a counter question: “How many Jews during the Holocaust did your grandfather save, Mr. Račas?”

PS. I always try to stick to the principle of the presumption of innocence. Therefore in my question the word save doesn’t have any quotation marks.

Pinchos Fridberg was born in Vilnius on 24 May 1938. He graduated from Vilnius University in 1961 and completed his PhD in theoretical and mathematical physics in 1965 and an additional doctoral science degree in radio physics in 1974. From 1961 to 1978 he was chair of the Laboratory of Theoretical Investigations at the Vilnius Scientific Institute of Radio Measuring Devices. In 1978 he joined Grodno State University, where he was named professor. In 1989 he became head of the Department of Theoretical Radio Physics at the Zondas Company in Vilnius, where he now lives as a pensioner.