For the record, Defending History strongly supports the commemoration of the victims of Communism, Stalinism and other totalitarian regimes, and has no objection to any date chosen for that noble and vitally important purpose. The objection is to the attempt to “equalize” the Holocaust with Communist crimes via combination of commemoration into a single mix-and-match day. In various Eastern European countries, the wider effort includes the glorification of Holocaust collaborators and perpetrators (they were after all “anti-Soviet” and in a world where all is equal….), the defamation of Holocaust survivors who joined the anti-Nazi resistance, and a series of attempts to rewrite history to confound and equalize those who committed the genocide at Auschwitz with those who liberated Auschwitz. It has often been pointed out, moreover, that the mix-and-match day purporting to deal with both Nazi and Soviet crimes, together, would have the inevitable effect down the road of weakening or supplanting International Holocaust Remembrance Day. Should the WJC tweet not have included a most modest caveat? Should it not be a little more sensitive  to the pain caused to Holocaust survivors and their families? 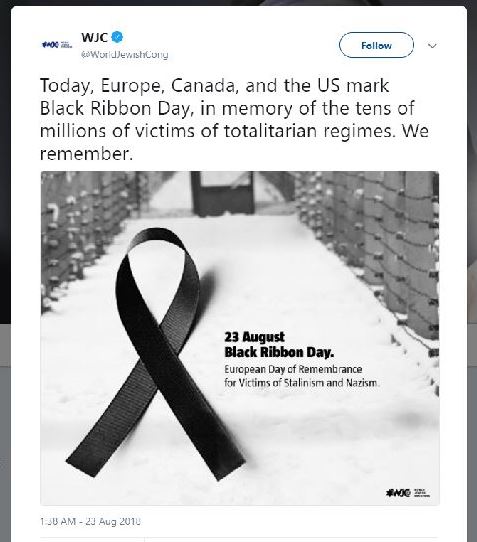