Posted on 14 January 2011 by Defending History

“The Center has always believed that the prosecution of the murderers of the Holocaust is one of the most fitting means of commemorating those annihilated by the Nazis. Famed Nazi-hunter Simon Wiesenthal often noted his sense of personal obligation toward the victims of the Holocaust to do his utmost to maximize the number of murderers forced to pay for their crimes. Needless to say, such trials also play an important role in educating the public about the Holocaust, preserving its memory and helping to combat contemporary antisemitism, racism, and xenophobia.”
— Efraim Zuroff, in the introduction to the new edition of “Worldwide Investigation and Prosecution of Nazi War Criminals” 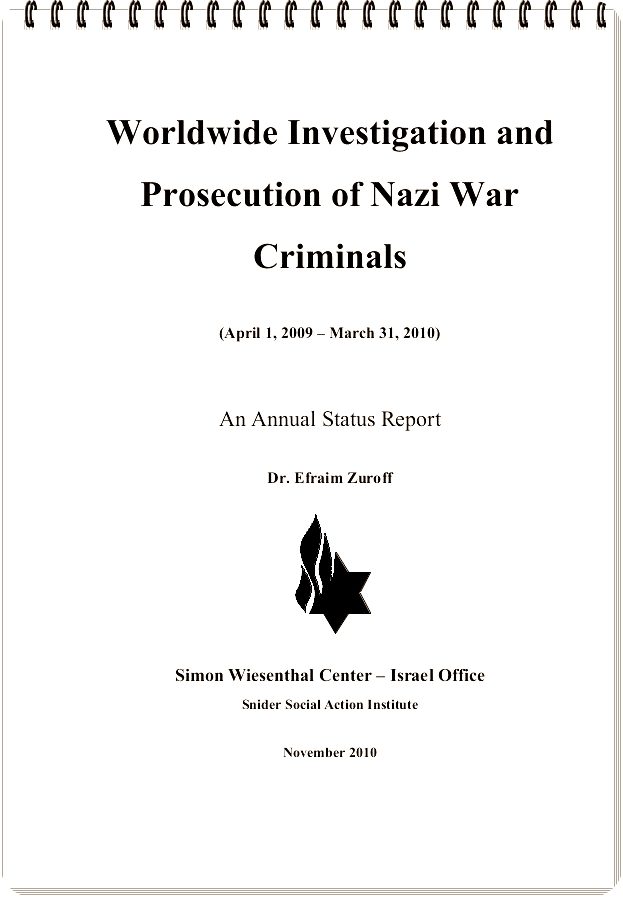 The annual status report, by the Wiesenthal Centre’s Israel Office director, Dr Efraim Zuroff, grades various countries on their efforts to carry forward investigations into Nazi war criminals during the period covered by each report. Invariably, the energy vs lethargy scale of action reflects wider societal attitudes toward the Holocaust and its significance.

It is often startling  to note the changes — in either direction — in individual countries’ performance from year to year. Not infrequently, the performance varies radically as a function of changing political moods and trends, national or regional.

The report is available online on the Operation Last Chance website.