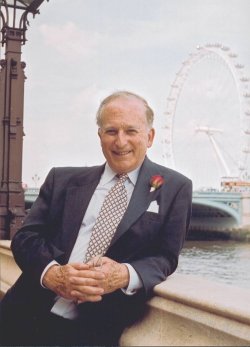 leaders of all political parties in the UK who have steadfastly supported cross-party work against racism and antisemitism and in the cause of proper and serious Holocaust commemoration. The essay, entitled ‘Never Again’, is issued on the eve of this year’s Holocaust Memorial Day on January 27th.

In his major substantive contribution, Lord Janner explains the connection of antisemitism with the current campaign, spearheaded in Lithuania and Latvia, to have Nazi and Soviet crimes declared equivalent in principle (‘Double Genocide’). The most recent incident involving efforts  by a group of East European states to insert ‘Double Genocide’ into European Union policy occurred last month.

“This process has been speeding up in countries such as Lithuania and Latvia. In some cases, the history of the horror is becoming twisted to suit a political and antisemitic agenda – and this deeply troubles me.

“This is an agenda of distorting the truth, the truth of who was the victim and who were the perpetrators – and denying this through the blanket statement of ‘a complicated history’. Of course, Stalin and his Soviet Union committed horrendous crimes against citizens in the USSR and these must be remembered to help ensure that totalitarian regimes can never commit such crimes again – but these must also be remembered separately, as a separate crime to that of the Nazis and of their vile attempt to cleanse Europe of the Jewish people.

“For Jews in Europe during the Holocaust there was little complication. The truth was and still remains that the Soviet and Allied forces were the heroes and the liberators and that Hitler’s Nazis were the perpetrators and the war criminals. Any attempt to pervert this history is an attack on the memory of the hundreds of thousands of Jews from that region who were murdered, including many of my own family, who were in Lithuania and Latvia.”

Lord Janner concludes his essay with the following: “Many of us repeat the words ‘Never Again’. This will become an empty statement if we allow the truth of the Holocaust and of other genocides to become lost pieces of history.”

Lord Janner of Braunstone, QC, is a president of the All-Party Parliamentary Group Against Antisemitism and chairman of the Holocaust Educational Trust. His work in Lithuania has included the monumental project to mark and preserve the more than two hundred mass grave sites throughout the country.

The essay is available here.