Posted on 16 February 2010 by Defending History 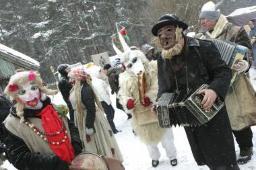 The annual Uzgavenes festival, celebrated throughout Lithuania, again featured costumes and behavior making fun of – and perpetuating the worst stereotypes of –  Roma and Jews (‘and monsters’). Roma and Jews comprise two of the country’s smallest and weakest minorities. Most of both communities were murdered during the Holocaust by the Nazis (with massive voluntary participation in the killings by locals). Today, progressive forces continue to live in hope that political, academic, legal, religious and cultural opinion makers in the country will rise to the occasion of explaining the essence, evil and dangers of such rampant racism unconvincingly disguised as the majority’s ‘national ethnographic tradition’. See below at 2008 (→ 6 Feb) for Michael Casper’s Forward report on that year’s event. Photo by Evaldas Butkevičius.