Posted on 14 November 2009 by Defending History 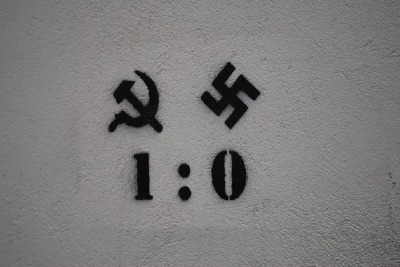 One of the novel forms of antisemitism to emerge from the post-Soviet Baltics revels in diminishing Nazism and ‘growing’ Communism (often regarded as a ‘Jewish plot’) in a macabre equation, to produce a model of ‘equality’ for naive westerners and the European Parliament, while at home gloating at perceived successes in actually presenting Communism as ‘worse’.  At the root of the project is the wish to obfuscate the Holocaust and the dismal Baltic record of collaboration, while seeking to cast aspersions on the victims and the few survivors by tacitly encouraging the canard ‘All Jews are Communists’. This graphic, a less-than-mature red-brown ‘scorecard’ (with the foregone result of the ‘game’ provided: Communism 1, Nazism 0), was offered up yet again by the mainstream news portal Delfi.lt, in the course of an attack on President Shimon Peres of Israel for having expressed his view that Nazism and Communism are not the same (English translation of the Delfi.lt article here). In any case, President Peres’s actual remarks in Lietuvos rytas (English here) were taken out of context and distorted.

This entry was posted in Antisemitism & Bias, Double Genocide, News & Views, Politics of Memory. Bookmark the permalink.
↑ Return to Top