Posted on 4 December 2011 by Defending History


The weekend edition (dated 3 December 2011) of Lithuania’s most prestigious daily, Lietuvos rytas, contained a massive three tabloid-page antisemitic article on the subject of the restitution law finally passed by the Seimas (parliament) last June. It was constructed as a journalistic inquiry but is replete with multiple and inflammatory antisemitic referencing.

The June 2011 restitution bill was based on a formula allocating 30% of the value of Jewish communal religious property to a foundation which would receive and allocate the funds, under strict supervision, over a ten year period, resulting in zero stress on the Lithuanian economy. This agreement came after many years of delays, heavy pressure from the United States, and was ‘timed’ to ensure that close to zero Holocaust survivors would ever benefit from the bulk of the funds.

The article, by Audronė Urbonaitė, is written in a profoundly antisemitic spirit, referring numerous times to ‘the Jews’ and seizing every opportunity to dig the knife in to the country’s minority that was wiped out during the Holocaust, leaving only a tiny remnant community. Lithuania had the highest rate of Holocaust genocide in Europe, due in no small measure to massive voluntary participation by the local population, and particularly ‘patriotic elites’, some of whom have been honored by state institutions in 2011 on the seventieth anniversary of the outbreak of the Lithuanian Holocaust.

The restitution bill included only a small part of the country’s prewar communal Jewish assets, and valued those at just 30% of their market value. These facts are ignored to make way for the author’s ‘journalistic investigation’ into the fall of prices during the recent recession which gives the impression that the restitution was vastly overvalued and the Lithuanian state somehow hoodwinked.

From references to ‘the Jews’ allegedly considering  ‘Lithuanians’ to be ‘Jew-shooters’ to direct accusations about the alleged communist past of current Jewish community elected leaders (a witch hunt not applied to the parliament’s members or those of any other institution in the country, public or private), the extensive article is written in the spirit of cunningly sowing discord and antisemitism against the nation’s tiny and shrinking Jewish minority. This comes alongside contrasting references to the Judaic ‘heritage’ which is cherished as part of Lithuania’s heritage, as distinct from living Jewish people who are citizens of Lithuania and are publicly disparaged on frequent occasions. Among the calumnies repeated is that only some eight hundred of the country’s Jews are ‘real’ Lithuanian Jews, and the rest some kind of imports.

The actual international fears about restitution are not mentioned. These include the possibilities that parts of it could be diverted to plans of ‘Europe’s last court-Jew’, MP Emanuel Zingeris, for a ‘Disneyland Vilna Ghetto Theme Park’ to bring tourism profit to a group of architects, builders and businessmen, a project championed by the former advisor to the prime minister on restitution, Mr. Zingeris’s close associate Arkady Vinokuras. In fact, the names Zingeris and Vinokuras do not appear at all in the article. . . 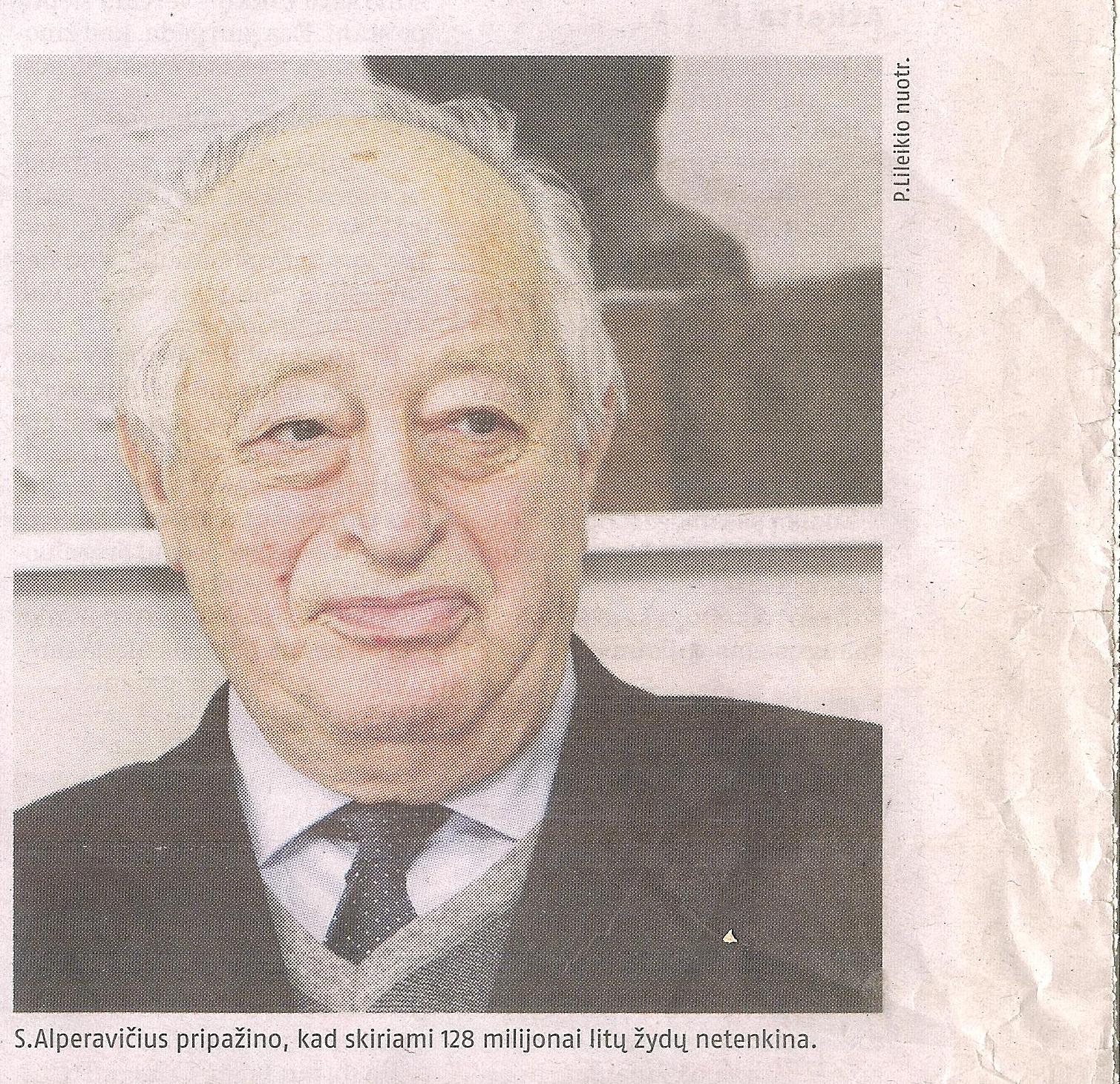 The (wholly concocted) caption under the photo of the elected 83 year old head of the Jewish Community of Lithuania, a scion of the fabled Strashun family of old Vilna, reads: 'S. Alperavičius admits that the 128 million litas allocated don't satisfy the Jews'.

Among the deeply disturbing features is the prominent photograph of the 83 year old elected, widely loved and internationally respected head of the Jewish community of Lithuania, Dr. Shimon Alperovich (Simonas Alperavičius), with the absurd caption: ‘S. Alperavičius admits that the 128 million litas allocated don’t satisfy the Jews’, a total misrepresentation of Dr. Alperovich’s careful reply to the reporter’s question.

Seventy-two hours after appearance of the article, there was no comment by any elected official or member of parliament. Not even from the officials who love welcoming foreign dignitaries to lavish conferences on antisemitism, tolerance and the Jewish heritage.