Avrohom Pinter’s unique synthesis of classic Yiddish humor and irony with modern interfaith tolerance and respect made him a figure of unity, humanity and peace in the midst of troubled and divisive times. Within more traditional circles, his humorous and loving treatment of Hasidic-Litvak issues and lore was equally legendary.

Rabbi Pinter, in touch with this journal’s editor since the late 1980s (when they cooperated profoundly to counter efforts to discredit Stamford Hill’s Yiddish-based education), was in much later years a member of the committee of a group that Defending History has been criticizing for years — the London based “Committee for the Preservation of Jewish Cemeteries in Europe” (CPJCE) which has been colluding with builders and government officials in Vilnius, Lithuania to desecrate the Old Vilna Cemetery by way of a convention center and annex “approved” by the London group of “grave traders”.

But Rabbi Abraham Pinter, alone in these circles in London, publicly did the right thing.

For most people, signing Ruta Bloshtein’s petition is the easiest thing in the world. For Rabbi Avrohom Pinter, it was, in the context of northeast London, an act of singular courage…

Within four days of its being launched, he publicly signed Ruta Bloshtein’s international petition as soon as he learned of it, on 17 December 2016. His was signature no. 67 on the petition, which today numbers close to 52,000 signatories. He was proud to be listed on our page of international opponents of the Vilna travesty all these years, and our 2017 reply to Rabbi Herschel Gluck cited Rabbi Avrohom Pinter’s “inspirational courage”.

Indeed, when Defending History issued its July 2015 Open Letter to the CPJCE’s leadership, only Rabbi Pinter arranged a warm and friendly telephone conversation to ensure us that the views about a convention center in the old Vilna Jewish cemetery were not his!

In addition to never being forgotten in London, Rabbi Avrohom Pinter will never be forgotten here in Vilna, either… 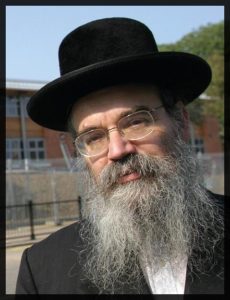