Posted on 6 December 2010 by Defending History

A demonstration was mounted Saturday, 4 December 2010 in Budapest, in support of Petras Stankeras, the recently resigned ‘specialist’ at Lithuania’s Interior Ministry who called the Holocaust ‘a legend’ and the Nuremberg Trials ‘a farce’ (details here). Protesters gathered in front of the Lithuanian Embassy in Budapest.

The main sign at the demonstration read: “The Truth Makes You Free” (see: http://kitartas.mozgalom.org).  Participating Hungarian far-right groups included the relatively unknown Városi Ellenállás (Urban Resistance) group, along with the Hungarist Pax Hungarica Movement (PHM, the heir of the Blood and Honor group banned in 2005), and the  more prominent Sixty-Four Counties Youth Movement (HVIM) whose president is now an MP in the Jobbik fraction in the nati0n’s parliament. 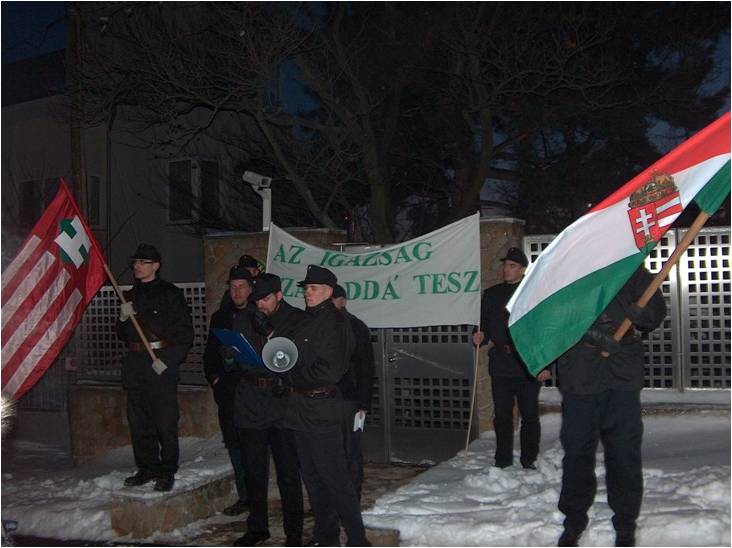 The Budapest chapters of PHM and HVIM penned a petition that they intended to hand over to HE Renetas Juška, the ambassador of Lithuania to Hungary. Calling it an international outrage that Stankeras’ publication elicited a ‘campaign of hysteria started by Jewish lobby groups’,  the letter describes the home countries of the protesting ambassadors as ‘puppet states’ and ask Juška to pass on to his government that Lithuania the demand that the Holocaust denier will not be ‘put on the  chain gang again’.

The leaders of the participating organizations gave speeches advocating Holocaust revisionism and called on ‘Lithuanian patriots’ to stand up for their views in order to prevent the passing of a ‘muzzle gag’ law in Lithuania similar to one in Hungary (a law against Holocaust denial and relativization was passed by the former Hungarian government this April, and then converted to a red-equals-brown law shortly after the new right-wing government took power; details here). As no employee of the embassy agreed to receive the petition, the leader of PHM dropped it into the embassy’s mailbox.

With this, the Hungarian far-right yet again demonstrated its international isolation. Since 2009, Jobbik MEPs sit in the European Parliament as non-inscrits; in April 2010, HE Eleni Tsakopoulos Kounalakis, the ambassador of the US to Hungary visited all Hungarian parties after the elections – except for the Jobbik fraction. To add insult to injury, HE Ahmad Abdelrazek, the ambassador of Palestine explicitly denounced Jobbik after the elections, remarking that ‘we have no intention to form a partnership with racists’.  Finally, when Jobbik organized an ‘Arab-Hungarian Friendship Day’ on 9/11 this year, the invited Arab speakers cancelled their participation in the last minute and only six Arabs attended the event.

The Stankeras affair is yet another link in this chain of events.

This entry was posted in Celebrations of Fascism, Hungary, News & Views. Bookmark the permalink.
↑ Return to Top