The annual commemorative event honoring the Estonian Waffen SS fascists  (Estonian SS Division 20) was held on 31 July 2010. Nazi insignia and swastikas were proudly worn both by veterans and supporters, local and international. In previous years, the Estonian government had sent official greetings to the event, but this year, in the face of international attention, greetings came from individual members of parliament. NCSJ report.  ADL.  JTA.  RT video.  Photo gallery.  Response of the prime minister of Estonia. 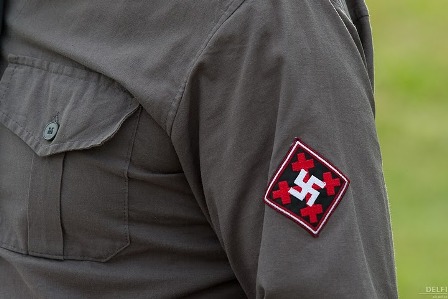 A Klaipeda court ruled that publicly displayed posters with swastikas (see image below) that were held by participants in Feb 16th Independence Day marches were legal because they represent ‘Lithuania’s historical heritage rather than symbols of Nazi Germany’ (BNS report here). Delfi report.   JTA report on the court’s decision and Dr Efraim Zuroff’s reaction. 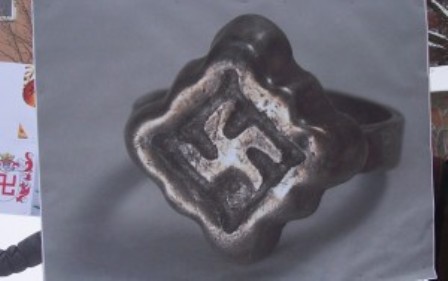 Vilnius police were rightly praised for maintaining order at the Baltic Pride parade, which was able to go ahead at the last minute when a judge overruled prosecutors’ objections. But in yet another example of ‘the politics of amoral balance’ the police the same day offered a solid cordon of protection to the neo-Nazis who were shouting ‘Heil Hitler’ as well as racist, antisemitic and homophobic epithets from the prestigious vantage point of the Reval Lietuva Hotel. The Nazi bonafides of the symbols on their flags were confirmed by paper materials that were handed out and sold at the event. There were no protests from Western embassies in Vilnius or the international community Full report here. 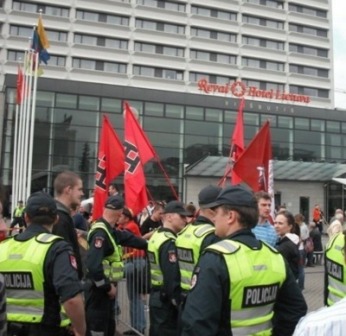 The best efforts of the mayor of Riga to ban the Match 16th 2010 march and ceremony in honor of the Latvian Waffen SS failed when courts overturned the ban and the march went ahead. Our report here. See also reports by Efraim Zuroff in the Guardian (18 March 2010); David Charter in the London Times (17 March 2010); Gary Peach on Associated Press (16 March 2010); Clemens Heni on WPK (22 March 2010); Dovid Katz in the Algemeiner Journal (26 March 2010) The Baltic Times pro-fascist slanted coverage exposed here. The incredible 17 March press release from the Foreign Minister of Latvia attacking Dr Efraim Zuroff for challenging the march’s legitimacy. 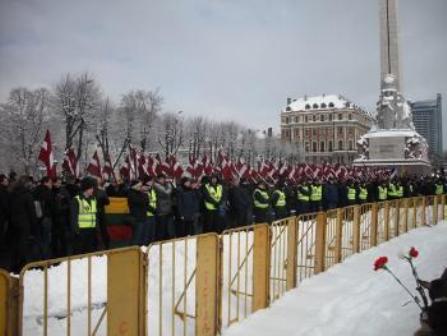 The annual neo-fascist independence day march went ahead in central Vilnius. The permit for the march was obtained by a member of the country’s parliament. Another member of parliament joined the march. In addition to various fascist symbols and shouts of Lietuva Lietuvams (‘Lithuania for Lithuanians’), a number of the marchers wore white armbands. The special significance of the white armband in Lithuania is the inevitable linkage with the LAF Nazi collaborating murderers who unleashed the Lithuanian Holocaust even before arrival of German forces in dozens of locations throughout the country.  Our report of the event here. 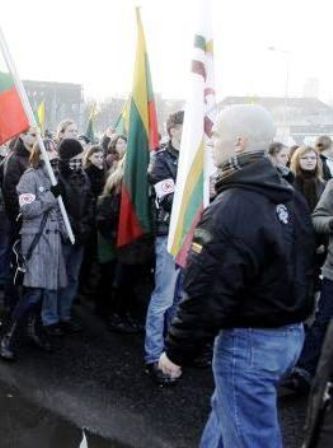