Posted on 26 January 2017 by Defending History

The following letter, presented in German facsmile of the original and in a draft English translation, was sent by German soldier Heinrich Sandt (1908 — 19??) from Kaunas (Kovno), Lithuania, on 29 June 1941 (the letter is both dated and stamped with the date). He was a member of the 10th Company of Infantry Regiment 89 (later Grenadier Regiment 89). He wrote the letter to his wife Elisabeth about what he witnessed in Kaunas. The 89th appears to have crossed the Nemunas (Nieman River) on 25 June 1941.

It is one of some five hundred letters from Heinrich Sandt that were kept by his son. Shortly before his own death, the son gave the entire collection of family documents to Chris Steinbrecher, an art historian living in Bremen, who produced a digitized file of the text of the letters. I visited him and saw the entire collection. Of course caution is always the order of the day, but for me the letters appear completely genuine and the dates, facts and mentioned family events and relationships are all in accordance with known facts. The originals of the letters and the pictures of Heinrich Sandt have now been donated to Yad Vashem in Jerusalem. They have called the letters “an historical treasure”.

The mention of women present at the Lietukis Garage murders is in any case independently corroborated by other sources, including well-known and starkly clear photographs (e.g. in Ernste Klee, Willi Dressen, Volker Riess, “The Good Old Days”: The Holocaust as Seen by its Perpetrators and Bystanders). What is new in the discovered letters is the mention of visibly pregnant women excited about the killings. 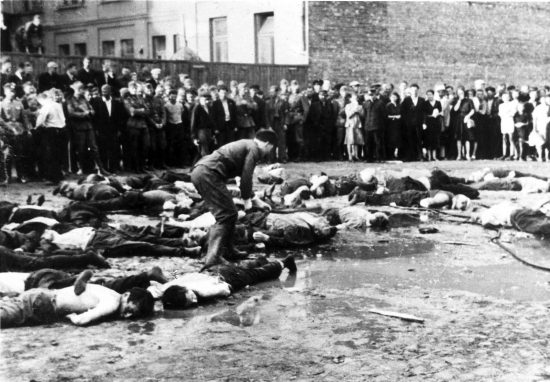 We are still situated in Kovno with the complete division baggage train. How far the companies have come yet, I don’t know. Anyhow, for K. [Kovno] the war is over. She has become a stage town overnight. By the way, today is thought to be Sunday. I do not know. I just know that it is currently raining. Therefore I’ve retired into the driver’s seat of my car. The blotting pad is lying on the wheel, so everything is ok.

The further you get eastwards, the dirtier and more disgusting — by our standards — the cities become. K. indeed has certain beautiful and wide streets and modern boulevards. But it all looks so modern, very  much built overnight. The advanced objectives of the time of the World War [World War I] and the following period characterizes the city center. But once you turn off the boulevard into the side alleys, they are small, partially unpaved, derelict wooden houses, smelly from filth. You really have to hold your nose. This smell does not disappear in the big streets either. Instead K. is draped in a cloud of smog that smells of all lifestyle habits and the filthiness of the East. How deeply and freely you breathe when you reach the city boundary!

My first activity in K. was to get some beer. Fortunately I was one of the first. The rush was so big, because all units wanted to drink beer, so finally the Field Gendarmerie had to intervene and impose order. The brewery dispensed beer and the grunts made ample use of it.  At some point the women who worked in the factory arrived. They have been very outgoing and soon pictures were developed that just could not be tolerated anymore. Yes, this is war. The only good thing is that within the army the iron broom is still prevailing, it just doesn’t work without it. In the afternoon I drove into Kovno again. The setting became more lively. The Lithuanian self-protection and White Russians speeded in trucks through the city and hunted down the Jews. In front of a cemetery, which lay on one side of the street and a garage on the other side, a big crowd of people was gathered. Already from afar one could see the excitement with which the crowd participated in the incidents that were transpiring on the wide square in front of the garage.

While taking my steps toward this square, I heard a crying and groaning, a laughter and hooting, swearing and screaming. Then I saw iron bars, gunstocks, wooden cudgels and other items speeding downwards, as if someone was striking on something with anger and ire. And at the right: the Jews were herded up and battered there. It was a scene that could not be exceeded in frightfulness and gruesomeness. Therefore I refuse to go into great detail. This evening the [illegible] people celebrated a public festival on top of the corpses of the Jews who were battered to death. An accordion played and the mob danced on top of the corpses, jeering and whooping. The women have been the worst. Even heavily pregnant women delighted in this dance of the dead. Meanwhile the Field Gendarmerie has intervened. From that moment on the Jews weretreated more humanly, i.e. they were still being herded together in hundreds with weapons and then shot. But earlier they would have to dig their own grave. Only the Slav can be that cruel.

Naturally the Lithuanians are favorably disposed towards us as we have disabused them of the terror of the Reds. But neither do they have anything to eat. Everything is rationalized resp. formalized. The head functionaries who brought all this misery have fled early. But they will also be seized. The large encircled areas that we’ve built are death areas for all those that are inside. You cannot imagine with which weapons such encircled areas are surrounded. Guns in vast numbers and then always in with Uncle Otto. Prisoners are not taken, so cruel here is the war. —

In a moment the first breaking news will come. I want to listen to it. — The successes are enormous, aren’t they? Have you also heard the S.-message about the tank battle north of Kovno?

A few days ago I had a nice dream! While on the march I came near to Weddewarden. I asked the Lt. for a vacation to visit you. This holiday was just wonderful. We sat together in the  parlor and told each other how pleased we were to have each other back again. The night has also been indescribably pleasant. When I woke up I didn’t, unfortunately,  lie right beside you but in a Lithuanian barn and had only manage to dream successfully. I had to switch gears right after waking up because the reality wasn’t reality.

With best regards to you, the children and everyone 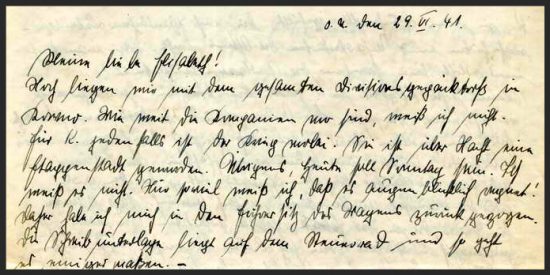 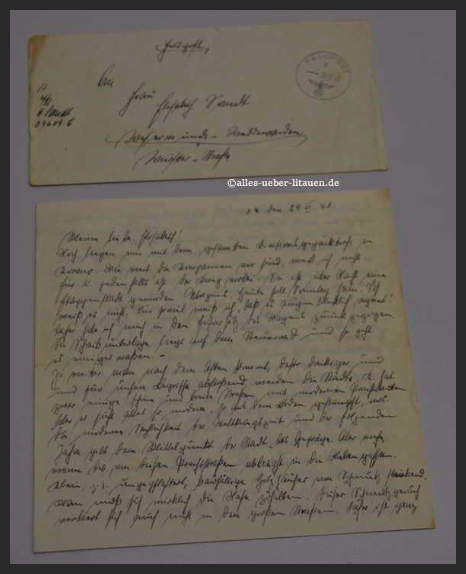