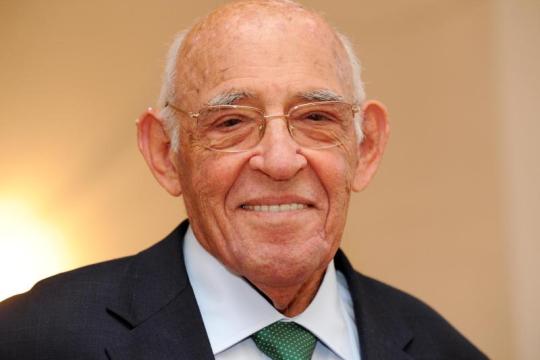 As a survivor – of the Kovno Ghetto, and of Dachau, including its Landsberg-Kaufering labor sub-camp  – Uri knew all too well the horrors of the Shoah. Throughout his life, Uri was a tireless, dogged advocate for survivors from his home country of Lithuania and elsewhere.

Born in Kovno in 1928, Uri grew up in a proud Zionist home. He was just 13 when he and his family were sent to the Kovno ghetto in 1941. Young Uri, working in a German office, was soon recruited by the underground movement and risked his life numerous times stealing work permits that enabled Jews to escape the ghetto. He also saved the life of his 9-year-old brother, Dani, by hiding him during a Nazi Aktion against the ghetto’s children; even when beaten by the Germans Uri didn’t divulge where his brother was hiding.

He recalled in his testimony to Yad Vashem: “They went from house to house, and took the children. They arrested us all, including my brother. I was standing at a distance of about 4 meters. I saw how the German was holding him, and I said, ‘That’s it, he’s finished.’ My mind raced: Should I throw myself at the German? But before I had time to think, he pulled his arm free, releasing the German’s grip, and ran. In the meantime, they found out that this was my brother. They stripped me naked. ‘Where have you hidden your brother?’ Over and over and over again. What will I tell my mother? Not my father, what will I tell my mother? My mother had told me to watch over him. I have to look her in the eye and tell her I handed him over to them? I couldn’t bear that. They continued to beat me – until I passed out.”

The Germans started to clear the ghetto in July 1944 as the Red Army approached. Uri recalled in his testimony: “At Stutthof they said, ‘Women and children, get off here.’ And my mother and my sister got off. I don’t remember if we kissed. I don’t remember if we hugged. I don’t think we did. And I don’t understand why not. I didn’t know then that I would never see them again. She gave me a little photo of herself. In the concentration camp I put it in my wooden shoe, and from the sweat the emulsion came off the photo. And at the same time, she died.”

Uri’s grandparents, parents and sister were killed in Auschwitz and Stutthof.

In April 1945, Uri was placed on a train headed for Dachau. When the transport was bombed, he was able to jump off and escape into the woods, where he was rescued several days later by the Allies. Just this past April, he wrote to me of his reminiscences of that time: “I was 17. After four years in the ghetto and the concentration camp I was so famished and weak I could not walk, and was ordered to board a cattle train, which meant death. When the Americans bombarded us on the way, I managed to escape, and two days later — hiding in the woods and then in the cellar of a deserted military camp — I heard the loud noise of a tank. When I dared to come out, I saw a tank with a white star. I did not know that these were Americans and that I was liberated by a platoon whose commander was Jewish. Need I tell what a warm, wonderful feeling it was when the officer spoke Yiddish and told me to eat very little, because he probably saw people die from overeating.

“I did not know where to go, free for the first time after four years and alone in this country that was hell — Germany. I made my way to Landsberg and looked for shelter for the night. There were many soldiers, but I noticed there was one that was the commander. Somehow I sensed he was Jewish, and when I approached him he hugged me. He then called all Germans to the square and commanded two women to take me home and take care of me. After three months I discovered my younger brother, who was 13, was alive; the only survivor of the whole family.”

In his Yad Vashem testimony, Uri recalled meeting with his brother after the war, and discussed what he says to the Germans now. “The last person I expected to stay alive was my brother, Dani. Three months after the war I found him, but we didn’t hug, we didn’t kiss. Something happened to us, something had been uprooted. I always say to them, ‘The fact that you tore out our feelings, that you tore out of us the ability to love, to cry, to laugh, for this I will never forgive you.’ “

After the war, Uri worked as educator in Germany and Italy, until immigrating to Palestine in June 1946, where he became a member of Kibbutz Alonim. In 1948, he joined the Palmach and continued to serve as officer in the Israeli Defense Forces until 1951. For 10 years after his discharge, Uri worked for several firms until establishing himself, in 1961, as an independent industrialist and corporate manager.

The list of organizations to which Uri gave his time is long. He was chairman of the Association of Survivors of Dachau, Landsberg and Kaufering Camps in Israel.  He also served on the boards of the Center  Organizations for Holocaust Survivors, the Association of Lithuanian Jews in Israel and the Bavarian State Memorial Foundation, which is responsible for preservation of the Dachau and Flossenbürg concentration camps, and the World Jewish Restitution Organization (WJRO) and its committee for Lithuania.  At the time of his death, Uri was still pushing for private-property restitution for Lithuanian survivors.

Uri had also worked tirelessly with the WJRO on behalf of Lithuanian Holocaust survivors for compensation from Lithuania. He was the de facto representative of Lithuanian survivors during nine years of WJRO negotiations that led to a 2011 agreement with the Lithuanian government, which transferred $1.1 million to the Lithuanian Goodwill Foundation, a partnership of the local Jewish community and WJRO, as compensation for confiscated formerly Jewish-owned communal property. The Foundation, with the help of the Claims Conference, processed claims and made payments to about 2,000 surviving Lithuanian Jewish Holocaust victims worldwide.

The legislation also provided for $53 million to be paid to the local Jewish community over 10 years, as compensation for a small portion of the Jewish communal property seized during the Shoah. WJRO hopes that this legislation signals movement towards greater Lithuanian acknowledgement of responsibility to Jewish victims of Nazi persecution.

In August 2013, Uri met with German Chancellor Angela Merkel during her visit to Dachau, the first time ever that a sitting German head of state visited this site of the Nazis’ Final Solution against the Jewish people.  The Chancellor “listened to what we had to say, and she was very warm,” Uri said after the ceremony. “She asked me, how I can come back to this place? I told her that even after so many years [the pain] it does not go away, the memories about what happened and about the six million, about our families. Memories are not leaving us; I still have to think about all of them, about my sister, about my little cousin. But we have to continue to live.”

In 2006, he was one of six torch-lighters at the Yom HaShoah state ceremony at Yad Vashem, representing the six million Jewish who were murdered.

Uri was married to Yehudit, and is survived by her, three children and five grandchildren. He is also survived by his brother Dani, who he saved from the Nazis. Uri was 87. His funeral is taking place tomorrow, Thursday, in Kfar Shmaryahu.

On a personal note, as a fellow Litvak, Uri always reflected a kindred spirit to me. I am devastated that he will no longer return to our table and continue to exhort us to fight the battle for our people.

Our lives have been enriched by knowing Uri and we are lessened at his passing. Yehi Zichro Baruch, may his memory be for a blessing.