Arkadijus Vinokuras: Again Twisting the Facts About Those who Stand Up to the Far Right?

Posted on 10 March 2015 by Defending History

VILNIUS—It seems the best way for Jewish wannabees to score points with the ultranationalist and elite-antisemitic establishment here is to throw well-crafted darts at Defending History. Back in 2011, former clown (and outstanding comedian and talented author) Arkadijus Vinokuras, when he was “official advisor to the government on Jewish affairs” accused the editor of this journal of participation in “Goebbels-worthy” misinformation, without citing a single error of fact. At various points in time, he issued personal attacks against the late head of the Jewish Community of Lithuania, Dr. Shimon Alperovich, and more general attacks on the community per se when its opinions happened to differ from the state’s on this or that issue, though such disagreements are quite a prosaic phenomenon in democratic societies.

Now, in the middle of the Baltic neo-Nazi marching season, Mr. Vinokuras has published his latest diatribe in which he accuses us of “seeing Nazi flags where none exist” in the course of our recent monitoring of the ultranationalist march in Kaunas on March 16th. He is right. There were no Nazi flags. We never saw any Nazi flags on this day. There were swastikas, white power and other fascist symbols (some on flags), chants of “Lithuania for [pure ethnic] Lithuanians” and a huge banner glorifying the 1941 Nazi puppet prime minister complicit in sending the Jewish citizens of his city, Kaunas, to a murder camp and the remainder to what became the Kovno Ghetto.

Here is a selection of images from the day: 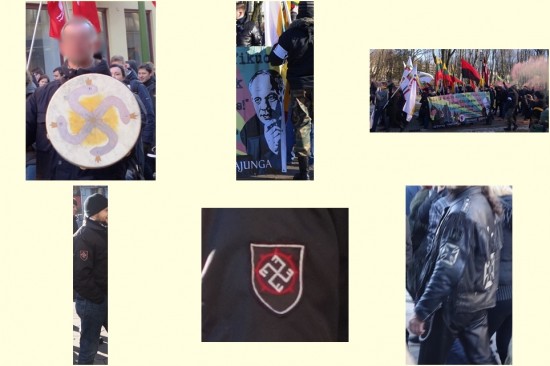 We did not incidentally see Mr. Vinokuras among the handful of monitors who turned out on the day. Among the eyewitness accounts, see those by the Jewish Telegraphic Agency reporter who came for the event, Efraim Zuroff, Evaldas Balciunas, Geoff Vasil and the summary in Defending History which contains numerous links to additional coverage, as well as to online collections of photographs of the event.

Mr. Vinokuras took his “knowledge” of the facts from the far-right descriptions of the march, which naturally denied the presence of Nazi symbols, instead of from the monitors who went in the ice and snow to face fascist taunts and threats to look and see and photograph what there was to see. Shame on him.

By warning in other parts of his article that such events play readily into the hands of today’s Putinist propaganda and its aggression-laden potential, he makes an absolutely correct point. But where is the moral backbone to say it is just wrong for true patriots of Lithuania to tolerate city-center independence-day marches that glorify collaborators in the murder of hundreds of thousands of Lithuanian citizens on the basis of their ethnicity and religion?

By falsely claiming we said there were “Nazi flags” and then pointing out that there weren’t, without pointing out which fascist symbols were present, Mr. Vinokuras has again twisted the facts to suit his perennial agenda of currying favor with the powerful nationalist establishment by discrediting those who have the courage and integrity to turn up to monitor a neo-Nazi march and report. In neighboring countries, such establishments can only dream of such Jewish clowns and commentators.