Just as Vilnius University put up a sign in Lithuanan and English, defending as “humanistic” its exhibition of a collection of envelopes by the antisemitic and homophobic designer Antanas Šakalys, the VU employee who had first provided the offensive images to DefendingHistory, which we published on 21 September 2012, provided another, at 2PM today, to coincide with the time of the scheduled gala opening of the exhibition, cancelled after our article and the 25 Septenber Delfi.lt report by Eglė Samoškaitė. The 2PM slot was then symbolically taken up at the university by a group of nine dauntless protesters against the glorification of an antisemitic and homophobic designer.

Ironically the envelope released today, a production of the same designer, also refers to “humanism”…

It goes to the heart of the locally inseparable nexus of antisemitism and Holocaust Obfuscation (denial/inversion/distortion/trivialization). The envelope is dedicated to the infamous Lietukis Garage massacre of 27 June 1941 in Kaunas when dozens of Jewish passers-by were brutally murdered by white-armbanded Lithuanian nationalists. The Germans had arrived in Kaunas but not yet set up their administration. Methods of murder of the Jewish townspeople rounded up including clubbing to death and the forcing of high pressure water hoses into the mouths and other bodily orifices of the victims, all to the delight of a cheering crowd. 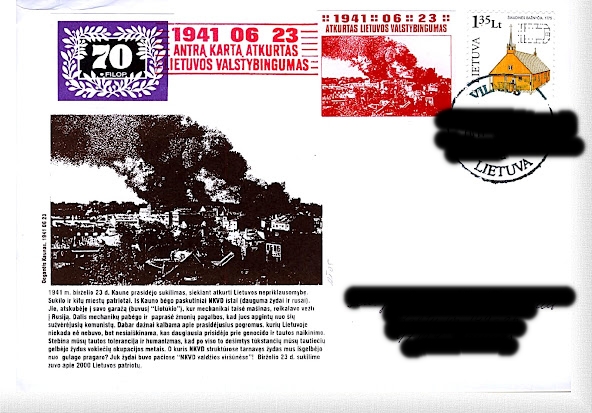