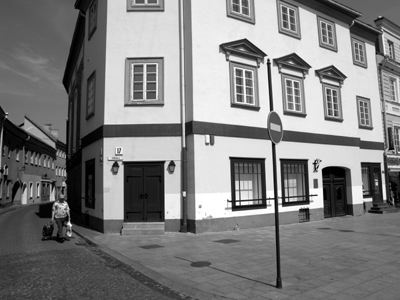 A ‘chief specialist’ of the Genocide Center participated in the March 2011 (and 2012 and 2013) neo-Nazi parades, and then went on to make antisemitic statements to the press.  His July 2011 article in the mainstream media. As of Summer 2012, he is still a ‘chief specialist’ at the Center.

“Remembering the parallel with homicide, it could be said, that one may cut off all four of a person’s limbs and he or she will still be alive, but it is enough to cut off the one and only head to send him or her to another dimension. The Jewish example clearly indicates that this is also true about genocide. Although an impressive percentage of the Jews were killed by the Nazis, their ethnic group survived, established its own extremely national state and continuously grew stronger. Therefore, although a huge percentage of killed group members may indicate the cruelty of the oppressor, more complicated methods are needed to estimate the real results of genocide for the group as the entity.”

DH SECTION ON THE GENOCIDE CENTER

Individual pages of DefendingHistory.com are dedicated to unraveling various aspects of the revisionist history campaign now underway in Europe. It is not always easy to disentangle the interlocking components. They include: trying to replace the history of the Holocaust with a new model of ‘Two Equal Genocides’ (Soviet and Nazi) in resolutions before the European parliament; the establishment of state-sponsored commissions to carry out the campaigns to get this done, even while convincing western organizations that the ‘new’ Holocaust studies incorporated within this paradigm are legitimate.

The Genocide Center is responsible for the historical misrepresentations and antisemitic exhibits at the Genocide Museum (and its new “Holocaust room”) in central Vilnius, and at Gruto Parkas near Druskininkai.

But there is also the disturbing issue of discrepancy between the ‘for export’ versions and what is on offer domestically on the ground. At major institutions in certain East European capitals, the impression is given that there was in fact only one genocide in Eastern Europe, and that it was the Soviet one, a notion frequently accompanied by antisemitic mischaracterizations of Soviet crimes as largely or primarily Jewish.

This is particularly evident at the Museum of Genocide Victims on the main boulevard of Vilnius, the Lithuanian capital, and at the Gruto Parkas (Lenin Statue Park) tourist complex near Druskininkai.  Features common to both include (a) diminution or elimination of the Holocaust from the history formally presented to the public and tourists; (b) open antisemitism and disdain for Holocaust victims, survivors and anti-Nazi resistance fighters, and (c) a pro-fascist ambiance that extends, unbelievably, to glorification of perpetrators of genocide as long as they were in someone’s sense ‘anti-Soviet’. On this last point, see now the valiant July 2010 essay by Lithuanian author and humanist Tomas Venclova, and the courageous statement issued in September 2010 by the Jewish Community of Lithuania.

Does the Genocide Center attempt to whitewash Nazi war criminals (instead of investigating their crimes)?

Two further distressing aspects have come into play in recent years, in a way wholly unanticipated. First, the efforts to criminalize and prosecute Holocaust Survivors who joined the anti-Nazi resistance. Second, the introduction of new laws to criminalize opinions that differ from the new ‘Truth’ about history that states in the region (not only Lithuania!) are attempting to legislate. It has taken time for news of these sometimes opaque developments to adequately filter through, but at last, there is growing awareness and opposition in Western democratic and Jewish circles to the targeting of survivors, to the state commissions, and to the European Parliament campaign to ‘equalize’ Nazi and Soviet crimes. None of these Western responses try to diminish the genuine need to educate the West about the horrendous Soviet crimes and occupation from which the nations of Eastern Europe suffered so much.

The vexed issue of motives is sometimes linked to contemporary regional antisemitism (which in 2010 included judicial decisions in favor of swastika displays). Sometimes, it is seen to be an ultranationalist attempt to obfuscate and relativize the huge voluntary participation by ‘anti-Soviet patriots’ in the actual murder of virtually the entire Jewish population in Lithuania, Latvia and Estonia. Some (certainly not all) of the revisionist efforts here in Lithuania have been coordinated from one control center in central Vilnius: the state-sponsored Genocide and Resistance Research Center of Lithuania. Housed in a handsome building in Vilnius’s prestigious Old Town  (website here), it is the provider of historic information and texts for display to both the Genocide Museum and Gruto Parkas (where its texts stand as state’s historic fact despite the park’s privatization). It has its own ‘Special Investigations Department‘ and works closely with prosecutors and with parliament. Various politicians have held high positions in the Genocide Center.

Question of the Month:

The Genocide and Resistance Research Center of Lithuania reports on its website on the work of its Special Investigations Department.

Question: Does this department have any connection to the ongoing and shameful ‘investigations’ of Jewish Holocaust Survivors who joined the anti-Nazi resistance and are heroes of the free world? 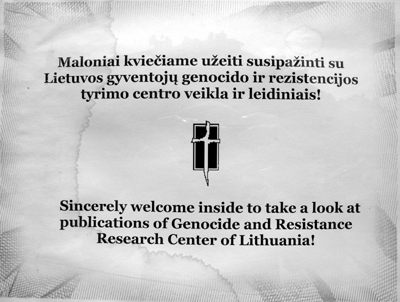 History has its ironies, and an old building its secrets. It so happens that the Genocide Center’s headquarters stands at the site of one of the gates of the (‘small’) Vilna Ghetto, located in the medieval Jewish Quarter area, moments from the Gaon of Vilna’s place of residence. These winding streelets constituted an epicenter of East European Jewish civilization for centuries. But inside this ghetto gate, set up in September 1941, thousands of the city’s Jewish citizens were incarcerated in preparation for genocide in a matter of weeks (distinct from the ‘large’ ghetto that was liquidated two years later, in 1943).

We are at the corner of Didžioji (Yiddish Breyte gas; ‘Broad Street’) and the narrow winding Stiklių Street (Yiddish Glezer gesl; ‘Glazier Street’). In fact, the gate to the ghetto was affixed right to this building’s wall. The angle in the wall marks the spot. The people outside the gate were free. Those on the inside were slated for genocide because they were Jewish. But this ‘detail’ is not mentioned on the building of this research center dedicated to — genocide in Lithuania. The precise spot is visible on the Yiddish map from Vilna Ghetto times, where the thick black line is the ghetto boundary. Most of the building (lower right hand corner of the map) borders the last yards of free Vilna at this gate, with the final portion, from the kink in the wall to the end, flush against the start of the Vilna Ghetto area. Below it, a zoom-in of the building itself. 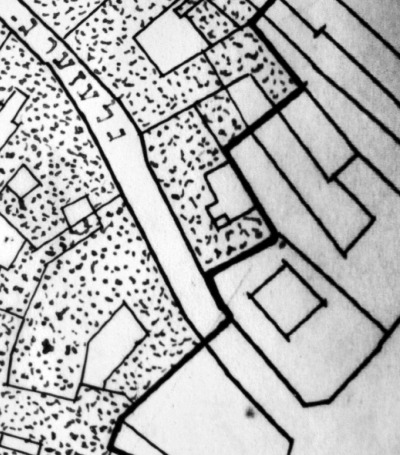 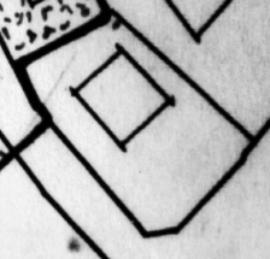 The kink in the wall marks the spot. The ghetto gate was affixed to the wall of this building (it is thought) right at or very near the angled meeting of the two sections. Incarceration for genocide to one side. Freedom of the ‘superior’ races on the other. A spot that seems, very sadly, not to be deemed worthy of historic marking by the building’s present occupants: the Genocide and Resistance Research Center. 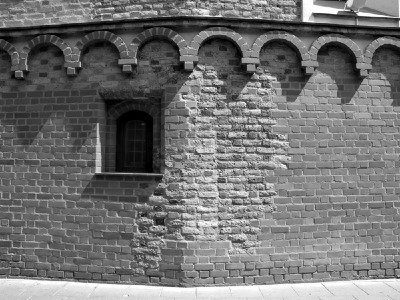 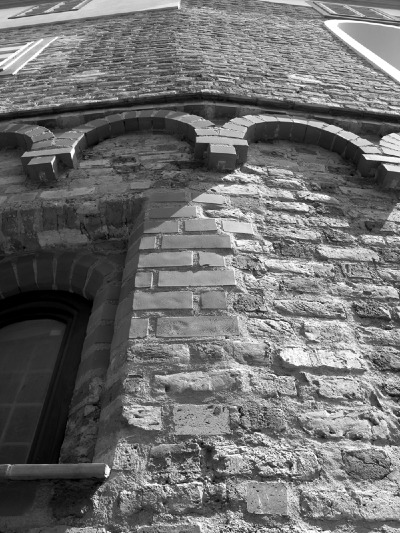 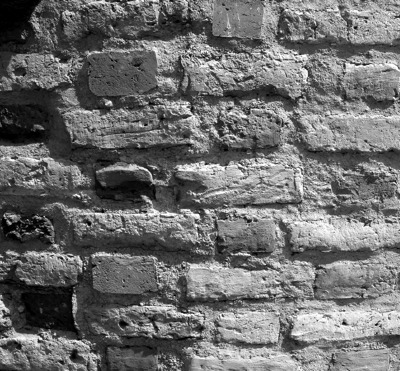 The plot thickens. The building now housing the Genocide Center is pivotal in the historic narrative of the Vilna Ghetto. It is where the Nazis staged the ‘Great Provocation’ of 31 August 1941 — the alleged shooting of a German soldier — that was used as the pretext for the immediate murder of around eight thousand Jewish citizens, followed within a week by the herding of all the city’s Jews into the two ghettos in early September. It is the building from which an alleged shooter was dragged and beaten. Herman Kruk wrote in his diary:

‘On the corner of [Wielka = Didžioji, Breyte gas] and Glezer Streets, a shot was heard. They say a German was wounded. Soon there was a commotion, and someone pointed to a Jew from a house on that corner of Glezer and Wielka Streets, as the one who must have shot the German. People soon appeared there; the Jew was beaten horribly, everything was thrown out of his house, and a pogrom against Jewish property spread over Glezer and Jatkowa Streets. This did not finish the game. At night, they started driving the tenants out of their apartments. This goes on today, too.’ [excerpt of entry for Tuesday, 2 September 1941]

from: Herman Kruk, The Last Days of the Jerusalem of Lithuania. Edited and introduced by Benjamin Harshav. Translated by Barbara Harshav. Yivo and Yale University Press: New Haven & London 2002, p. 83.

Immediately following the alleged shooting of a German soldier on Glezer Street on Sunday 31 August 1941, and the accusation against a Jewish resident of the building that is today the Genocide Center, some eight thousand Jews were arrested, taken to Lukishki Prison and from there to Ponar (Paneriai) and murdered. Within a week the ‘retaliatory measures’ included the incarceration of all the city’s Jews in the first (large) and second (small) ghettos. This trilingual notice (German, Lithuanian, Polish) released by the Gestapo on Monday 1 September 1941 announced collective responsibility of the Jewish people for the shooting. Genocide of Vilna’s Jewry was underway. Image from Leyzer Ran, Jerusalem of Lithuania, NY 1974, vol. II, p. 432). By permission of Professor Faye Ran (NY). 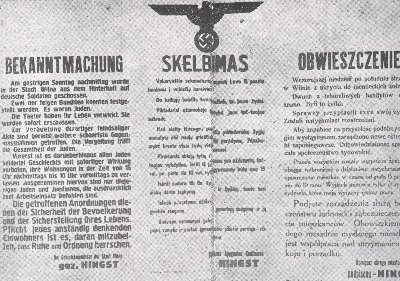 The abrupt murder of eight thousand citizens leads to stacks of ownerless property in town. The Gestapo rapidly followed up with this public order (Nr. 4 on 1 Sept. 1941), this time in German and Lithuanian, ordering the ‘registration’ of the abandoned Jewish property in Vilna. Image from Leyzer Ran, Jerusalem of Lithuania, NY 1974, vol. II, p. 432). By permission of Professor Faye Ran (NY). 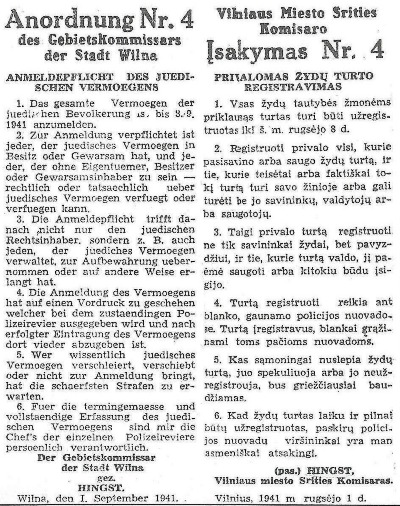 What then is today’s message of the Genocide Center to the outside world? After many protests, a single title containing the word Holocaust (a booklet by a local historian) was finally added to the pantheon of weighty tomes, nearly all of them on Soviet crimes. The horrific crimes of the communist regime obviously need to be exposed and studied, but not as a ruse for distorting or deleting the Holocaust, and not under the spurious title of Genocide in an establishment dedicated to that very topic, here at ground zero of the East European Holocaust. Bizarrely, this is an establishment that seems to want to downgrade the genocide that actually took place in the country. Below, the publications on display in the center’s windows. 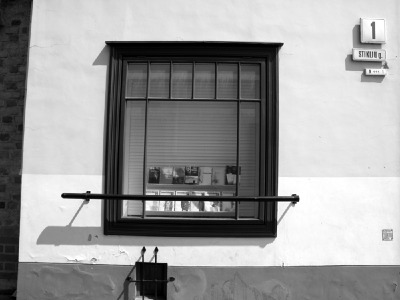 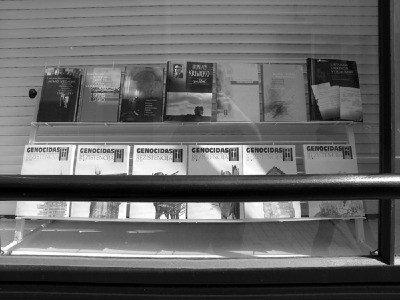 An image of this corner (start of Glezer gesl) from before the war, from Leyzer Ran’s Jerusalem of Lithuania (NY 1974, vol. I, p. 68). By permission of Professor Faye Ran (New York City). 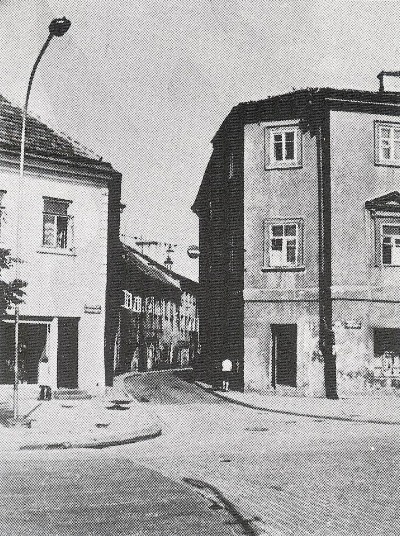 Then and now: Juxtaposition of the prewar image with the same spot today (© R. Schofield). 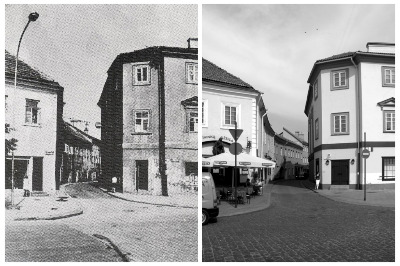