Born on June 28th, 1923 in the city (then Wilno, Poland; forever in Yiddish: Vílne), Meilach grew up on Kíyever gas (now: Kauno gatvė), opposite the Mishmères-Khéylim (Mishmeres Cholim) hospital which had a kloyz (prayer-house) where his grandfather Avigdor was the gábe (gabbai). Afterwards his family lived in a flat rented to them by a friendly Catholic priest on the grounds of nearby All Saints Church (Visų šventųjų; in local Yiddish: Kolanshómes [from: kol haneshómes ‘all souls’]). Meilach studied at the Yiddish secular Reál-gimnàzye on Rudnítsker gas (today’s Rūdninkų).

Meilach was a highly decorated hero of the war against Hitler (the only Jew in a Red Army unit of Cossacks). Most of his relatives were murdered at Ponár (Paneriai). He had received a letter in 1944 (after Vilna fell, but while he was still fighting at the front) that gave him the grim news that nobody of his family survived.

Feeling unable to live here again, he nevertheless decided in 1946 to come for one brief last farewell to his native Vílne. It was quick, and on his way up Sadóve (Sodų gatvė) to catch a train away from his beloved and desolate native city, he encountered a Polish friend from his youth, who worked in a movie theatre, and called out to him, saying that his mother Léye (Liza) was alive. 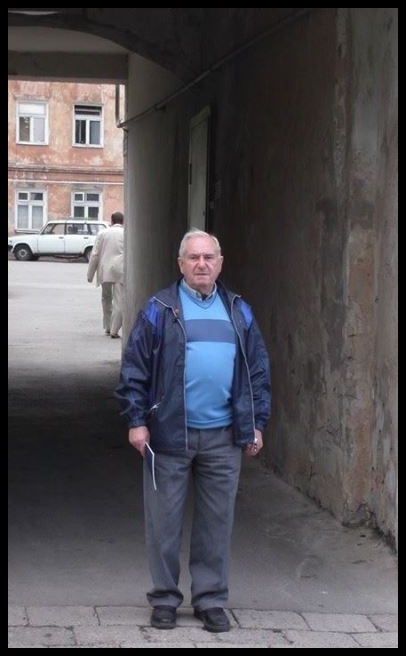 Meilach Stalevich at the precise spot where he found his mother on Zavalne Street (Pylimo) in Vilnius in 1946. Photo: Dovid Katz 2007.

Incredulous, and even angry that someone could be making up such things, Meilach went with the old acquaintance to look for her. They found her a few moments later in the passage to the courtyard on Zaválne (Pylimo) where she lived. Meilach recalls:

“For a long time, I couldn’t say a word. We just cried, she cried and I cried. Then I began to shout ‘Máme, Máme!’ and she was shouting ‘Méylakhl, mayn zun’! The other people in the courtyard were crying too. It seemed that the walls on every side of the courtyard were also crying.”

He spent the next 30 years with her in her little dwelling in that courtyard, in the heart of Vílne.

Meilach and I became good friends during my first trip to Lithuania in December of 1990. We met on a bus going from the Jewish Community to a commemoration at Ponár, when he got into a friendly but spirited argument with my host and guide that day, the late Professor Meir Shub. He was among the first to show me the old town, with extended memories conveyed during a stop on Žemaitijos (interwar Yiddish: Strashún gas), at the library that became the Vilna Ghetto library during the Holocaust, which he remembered well from its prewar days.

We also went into the building of his old Yiddish high school, the Reál-gimnàzye, which became the tragic Judenrat building in the ghetto, and which was in 1990 a museum. For Meilach it was forever his old school that he loved so much. One charming young woman who worked as a scientist at the museum thought it was amazing that he had studied there before the war, but most of the staff stiffened in apparent apoplexy when Meilach began to point to this and to that corner, explaining what it all had once been.

Meilach and I kept in touch by mail for a few years, but by the time I settled in Vilnius in 1999 I had thought he’d long emigrated.

Then, years later, we met on another Vilnius bus. He heard me talking Yiddish to a friend, came up to us and said: “Excuse me. There had once been a completely different person — he was young and handsome, not heavy, neat haircut and no beard at all — but with the exact same voice, he was visiting in town, so maybe you know him, the name was: Katz, Dovid.” Then we began meeting all the time, and later on, speaking on skype, which Meilach particularly loved.

Concern for friends: Meilach Stalevich’s email to Dovid Katz of 23 Feb. 2013, after the “mainstream news portal” Balsas.lt published a 15 Feb. 2013 opinion piece calling for him and Efraim Zuroff to both be torn limb from limb by wolves, after a 15 Feb. press conference at which they opposed the neo-Nazi march scheduled for the following day in the center of Kaunas on the nation’s independence day. Meilach’s letter translates: “My dear Dovid! If you’ll have a few minutes please go into skype and call me. I fear for your life. Meilach.”

Meilach became a stalwart participant in the Dr. Sheine Sideraitė Yiddish Reading Circle at the Jewish Community. At the age of 91, he startled the group last spring, when he delivered a robust and persuasive rebuttal to the image of Vilna depicted by the great Yiddish poet Méyshe Kúlbak in his immortal poem Vílne. His personal memories led to an animated discussion about the image of cities in the hearts and minds of poets. For years, it was at Meilach’s (correct) insistence that we begin every session with some Yiddish humor, before proceeding to the “serious” literary texts.

When we spoke at length about his life in preparation for an article on him I was writing in Yiddish in New York’s Algemeiner Journal (Álgemeyner zhurnál), Meilach, an atheist who always respected religious tradition and its keepers, called me over to a corner on the street, as if to say that what would come next is something private. He said, in rich Vilna Yiddish: “Look, Dovid, I believe that finding my mother on that day was a coincidence, be it a one-in-a-million coincidence, but if it’s better for you in your article to say that it was God’s doing, that’s fine too.”