Posted on 16 January 2012 by Defending History 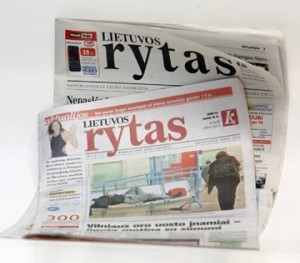 [Updated 8 February 2012] On January 15th, the Lietuvos rytas website (Lrytas.lt) published a massive article by veteran Holocaust denier Petras Stankeras, who was forced out of his Interior Ministry post in November 2010 after writing in a popular weekly that the murder of six million Jews is a ‘legend’. The new article features a flattering vintage framed photo of Hitler and is written in the form of an objective historic survey of the book’s history. It was a republication of an article by Stankeras that had earlier appeared in the elite magazine Kultūros barai.

As DefendingHistory.com senior analyst Geoff Vasil reported on 27 December 2011, the same sequence occurred with a fascism-friendly article by Stankeras that was likewise reprinted in the mainstream daily on 26 December 2011, after being premiered earlier in Kultūros barai.

Late last week, on 12 January 2012, an antisemitic article by another author, also published in Lietuvos rytas, drew the rapid attention of a Facebook thread and was rapidly pulled. A reader who took screen-shots of all but the first page has supplied them to DefendingHistory.com.

All this follows last month’s three-page assault on the Jewish community of Lithuania in an antisemitic article featured on the front page of the 3 December 2011 enlarged weekend edition.

Lietuvos rytas is widely considered to be Lithuania’s most respected daily newspaper, and its descent into sensationalist antisemitism over the past weeks is being spoken of as a tangible setback for the country.

On February 5, 2012, Lietuvos rytas ran yet another article from Kulturos barai, this time apparently in an attempt to appear somewhat impartial, written by Tomas Kavaliauskas who seriously questions the content of Stankeras’s latest article, the purpose of lending him a tribunal in the respected magazine and the sense of taste involved in Stankeras’s and
Kulturos barai‘s choice of illustrations: a still from a World War II era US government-contracted Disney Studios propaganda cartoon with Donald Duck cast as a witless Nazi, and a “Hitler Kitty” illustration of a cat with Hitler’s face carrying a book called Meow Kampf. An English translation of Tomas Kavaliauskas’s “On Donald Duck with a Swastika and a Hitler-like Cat Reading Meow Kampf’” is available here.