Isn’t it Time for the Author of the Myth to Apologize?

Posted on 14 March 2013 by Defending History

Editor’s note: This article was first published by Professor Fridberg in Russian in Мы здесь. The following translation, by Ludmila Makedonskaya, was commissioned by Defending History, and it appears with Professor Fridberg’s permission, and with Defending History’s sole responsibility for the translation. The original  text is authoritative in any instance of doubt or nuance.

On December 13th, 2012, the portal Zman.com published my article (in Russian) “Instead of the Truth About the Holocaust — Myths About Saving Jews.” It was republished by a number of websites including Newswe.com. I sent a picture and added one important phrase specifically for your site. The fundamental point: the article was republished (in Russian and in English) by the official site of the Lithuanian Jewish Community (LJC).

Instead of an immediate public apology for providing unreliable information and closing the matter, they started looking for a way to discredit me personally. You will ask why? My answer is because the article ends with three not very convenient questions. I should pay tribute to the Lithuanian journalist Račas who did not remain in the background, but answered very straightforwardly and simply:

On February 5th, at the end of the day, an “Open Letter” from a teacher, Ms. Bucevičė, came to the LJC in an email, in which she criticized my article harshly. On February 7th the LJC assistant chairman forwarded it to me for an answer, having notified the LJC leaders. The same day (!) I replied to Ms. Bucevičė, also notifying the LJC leaders. Instead of answering me, in which case all the material would certainly have been published on the LJC site, Ms. Bucevičė directed her open letter to the blog racas.lt.

On February 10th Račas’s article (in Lithuanian; in English), unprecedented in its acrimony, appears with a very characteristic title:

“Most Charming Jewish ‘professor’: Your Antisemitism has Already Driven Everyone up the Wall: dedicated to Pinchos Fridberg.”

Simultaneously, the mentioned author published her letter on the official website of the “International Commission for the Evaluation of the Crimes of the Nazi and Soviet Occupation Regimes in Lithuania.” Its executive director Mr. Račinskas on behalf of the Commission immediately sends it to all the editors who had published my article. In the accompanying letter he writes that “the Lithuanian Jewish Community lacked the civic courage to respond to the situation properly: apologize for making a mistake, and publish the open letter of a teacher Ms. Bucevičė at least on their website.” May I ask, what mistake must LJC apologize for? Is Ms. Vilkienė a member of the community? For Mr. Račinskas especially, I will cite here a letter from a priest whom I very highly respect, Father Andrius Sabaliauskas:

“Having listened to the audio files received from you, I can only say that this is the first time I’ve heard this number of rescued Jews cited and I have not heard about this number previously. Most likely a mistake was made by the honorable Mrs. Vilkienė as she delivered her report. I’m sorry, but I cannot provide any other comments.”

Facts are stubborn things! As for the words “at least publish” there are generally accepted rules of publishing readers’ opinions on materials published. Even if the reader titled his opinion an “open letter.” The rules are quite simple. On receiving a reader’s letter, the editorial staff sends it to the author to answer. After receiving the latter, the editors either decide to publish the reader’s letter or send him a reasoned refusal. It is only after receiving the reply that the reader acquires the moral right to send his letter to a different publication.

Everything that has happened is described in detail in my articles, “Chronicle of a Provocation” (in English; in Lithuanian) and “A Counter-Question for the Lithuanian Journalist Artūras Račas” (in Russian; in English).

On February 25th, the community received a letter, identical to the open letter of Ms. Bucevičė, like two peas in a pod. Its authors are two sisters living in Israel, Liba Rosenthal and Israela Blat. They did not wait for LJC’s answer, but immediately sent their letter to all the same addresses as Mr. Račinskas. To avoid errors in transcribing, here is the image of the letter: 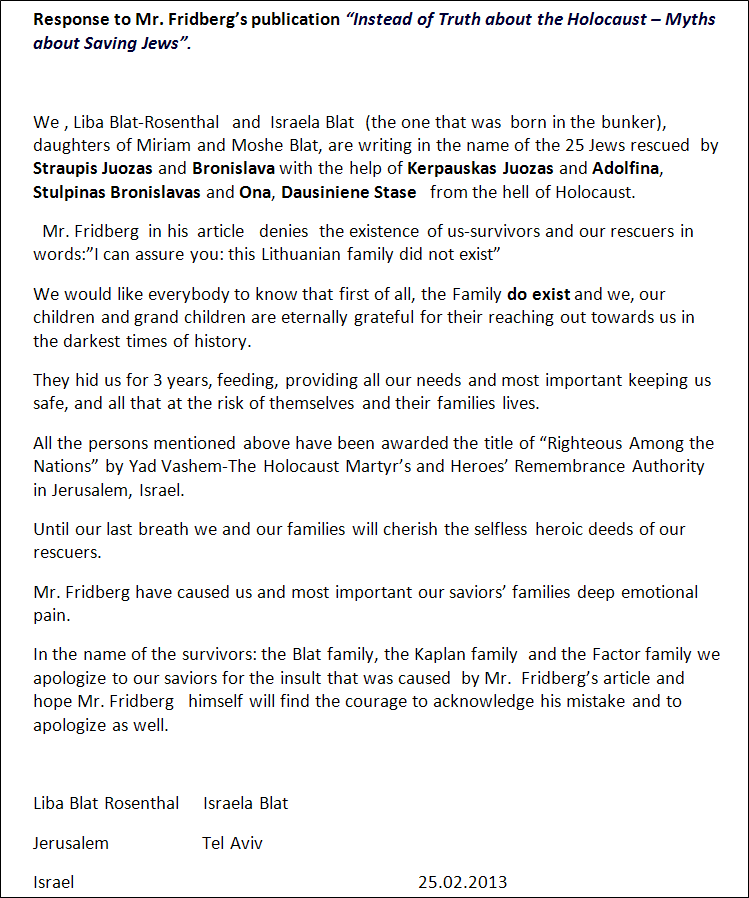 On February 28th, one day after receiving the sisters’ letter, I sent my answer to LJC. Here is the text:

Unlike you, I am writing only in my own name, and not on behalf of two hundred thousand innocent compatriot victims, including my grandparents, my wife’s father, her grandparents, and dozens of our closest relatives.

If you were not Holocaust survivors, I would not go into details, but answer you short and clear: only court trial is able to establish whether there are elements of defamation in my article “Instead of the Truth About the Holocaust — Myths About Saving Jews.”

I have nothing to apologize for, because I did not commit any errors.

It is painful for me to see that you have followed the teacher Ms. Bucevičė, and pulled out the phrase “I can assure you that this Lithuanian family does not exist” from my text, and repeated her concoctions.

Let me quote an excerpt from my article:

I thought I misheard the number 43. So after the speech I got up and said,

“Unfortunately, I’ve never heard of a Lithuanian family who saved 43 (forty three!) Jews in the course of three years in a huge bunker that was dug with the family’s own hands. Could you please give their surname?”

With full responsibility I can assure you: this Lithuanian family did not exist.

And you want to say that the family with all characteristics enumerated by Ms. Vilkienė existed? Can you imagine a husband and his pregnant wife digging (with a spade) a “huge-huge (in Lithuanian: didžiulį didžiulį) bunker,” into which 43 people can fit? How in the course of three years (!) did they “provide all hygienic conditions”? How did those “not very rich people” “cook and give them food all that time”? If you have affirmative answers to my questions, then, sorry for being rude, you don’t differ from the inaccurate Ms. Vilkienė!

And now — the most important thing. Did I assert anywhere that Lithuanians did not save Jews? After all, my wife Anita, Kaunas ghetto prisoner (Ausweis #4426), was saved by a Lithuanian, Bronislava Krištopavičiene, God bless her memory (zichroyno l’vrokho). She also saved three other Jews, whose children I managed to find only in 2010.

Before writing your letter, you should have read at least the first paragraph of my article:

“Until the last days of our lives we will consider the Righteous to be saints, the only ray of light in the darkest world of murderers and collaborators, like Juozas Brazaitis-Ambrazevičius, Antanas Impulevičius and Aleksandras Lileikis.”

To accuse me of contempt for the Righteous is outrageous. But I’m not going to explain to you what gives me the right to a statement like that. You may not believe me if you don’t want to. Go ahead, send more grist for Račas’s and Račinskas’s mills.

Do you know, how the teacher Bucevičė, author of the open letter, similar to yours like two peas in a pod, answered my question about whether “she heard of a Lithuanian family who saved 43 (forty-three!) Jews in a huge bunker, dug with their own hands, for three years”? She said:

“What’s the difference — whether it’s 43 or 30, it is the fact that they were saved that is important.”

Perhaps these words are the answer to the question:

How it could have happened that almost the entire Jewish population was exterminated in Lithuania?

Liba and Israela, think over Bucevičė’s response. And apologize for your letter.

Unless, of course, it is sponsored …

1. On your website I cite the fragments of three personal letters for the first time (you have their full copies), which I sent to the head of the Department of the Righteous (Righteous Gentiles Department) of the Vilna Gaon Jewish State Museum, Ms. Danutė Selčinskaja. My letters to her do not need any comments.

I am sending Vilkienė’s response to you. I decided to check all the addresses consistently. My goal is to establish the primary source, that is, to find out who started this myth and how it was disseminated. Yesterday I talked to Bucevičė. She redirected me to the priest Sabaliauskas. Today I talked to the priest. He redirected me to Klaipeda. Tomorrow I am going to contact Klaipeda.

You are a smart person and realize that the publication of such materials may put into question the reliability of other online materials, too.

The problem is not just in the Righteous, whom I have considered saints all my life.

The problem, from my point of view, in the outrageous story. To get acquainted with it in details, ask the Commission to give you the disk and listen to Vilkienė’s speech and my question. Note that in my letter to her I take her words in quotation marks, that is, I quote verbatim.

A person colorfully tells the entire forum about a Lithuanian family, who saved 43 (forty-three!) people in a huge bunker, dug with their own hands, for three years. Draws picturesque details!

Following the report, a man who does not affirm that the story was not true, letting the speaker get out of the situation somehow, says very gently that, to his regret, he has never heard of such a family, he will make every effort to tell the whole world about it, and asks for their name.

And then, like a bolt from the blue, the answer: I do not remember now. This outrageous response plunged me into shock. On getting home, I sent a letter about that forum to everyone I could (including a number of editors of Russian and English language publications).

The Forum participants left in full confidence that such a family existed. Her story was broadcast online. So my duty is to tell the world that the speaker was providing inaccurate information at the forum, and she is not just an ordinary country school teacher, but a person who occupies a responsible position in the Commission.

I have just finished a half-hour conversation with Ms. Jadwiga, whose parents, Stulpinas, Boleslovas and Ona, were among the Righteous (awarded in 1993). Her phone number was in the email, sent to me by the priest Sabaliauskas.

Our conversation was of a very friendly nature.

Today I have completed my investigation, finding out who gave birth to the myth of the “Lithuanian family who, in the course of three years, saved 43 Jews in the bunker built with their own hands.”

As I predicted, the authorship belongs to Ms. Vilkienė.

2. At my request, the head of the project “A Saved Jewish Child Tells About the Shoah” Ms. Danutė Selčinskaja made the following note: