Posted on 2 October 2016 by Defending History


VILNIUS—Just as Jewish people in Vilnius were getting down to intense preparations for the Jewish new year (Rosh Hashonnah, Rosheshóne in Yiddish), an official at Vilnius City Hall (the municipality) provided to Defending History (and presumably other publications) a letter that purports to be from the official Jewish community’s lay leader, Faina Kukliansky (in professional life the nation’s top EU citizenship lawyer for foreigners) that would sound the death knell for the internationally admired Jewish Cultural and Information Center (JCIC) on Mesiniu Street in the Lithuanian capital’s scenic Old Town.

The letter, dated 22 September 2016, insists that the entire staff of the center be moved to desk jobs in the Pylimo 4 headquarters, while the JCIC’s longstanding home of nearly ten years would be converted into a museum exhibit (for which there is ample alternative space in the official Community’s imposing property portfolio). As the municipal official — who provided the letter, on condition of anonymity — stated, this would mean the end of the JCIC in its present role as last bastion of open, free and democratic Jewish events reflecting all sectors of the Jewish community in addition to many non-Jews from the Lithuanian capital and far beyond who have come to love and admire Jewish culture (of which vibrant Jewish discourse is part) thanks to the Center’s work. There were some additional fears expressed by some community members that the new “museum to destroy the Vilnius Cultural and Information Center” could end up being a “gift” to a high “Bagel” mákher or to a close family relative of a high dignitary, but no details were forthcoming, and such rumors could likely reflect the shock at (purported) news that anyone would be trying to dismantle one of Vilnius’s most welcoming-to-all Jewish-themed institutions.

During the past week alone, the JCIC has hosted an art photography exhibition of Jewish Vilna by Isaiah Urken, the weekly Vilna Yiddish Literary Circle, now in its eighteenth year, and a number of open lectures and events that attracted, at a lecture Thursday evening on Litvak thought and history, an Orthodox rabbi, a Reform Jewish community organizer, a Catholic theologian, a Protestant pastor, diplomats from three Western embassies, Jews from Vilnius ranging in age from 22 to 79, plus some foreign visiting Jewish students at Vilnius University. The JCIC hosts the city’s only weekly Yiddish class (free of charge to all) during the academic year between September and June (the only other language program, mostly for foreigners, is an expensive one-month summer course elsewhere).

Defending History could not verify the authenticity of the letter provided, and it is being evaluated by several Lithuanian journalists at two major news portals. It is hoped that the Jewish community’s lay leader  will rapidly issue a clarification on the letter’s authenticity, and more generally, on whether her office is really campaigning to effectively shut down what many Jews in town consider to be the last bastion of genuinely free, open and frank dialogue on Litvak Jewish culture and the Jewish issues of the day.

Meanwhile, a number of prominent Litvak-related groups here and abroad are considering a new public petition to save the city’s beloved Jewish Cultural and Information Center. Many recall with affection its grand opening in May 2007, at which keynote addresses were delivered by the late leader of the Jewish community, Dr. Shimon Alperovich, and the late Israeli ambassador to the Baltics, HE Chen Ivri Apter. 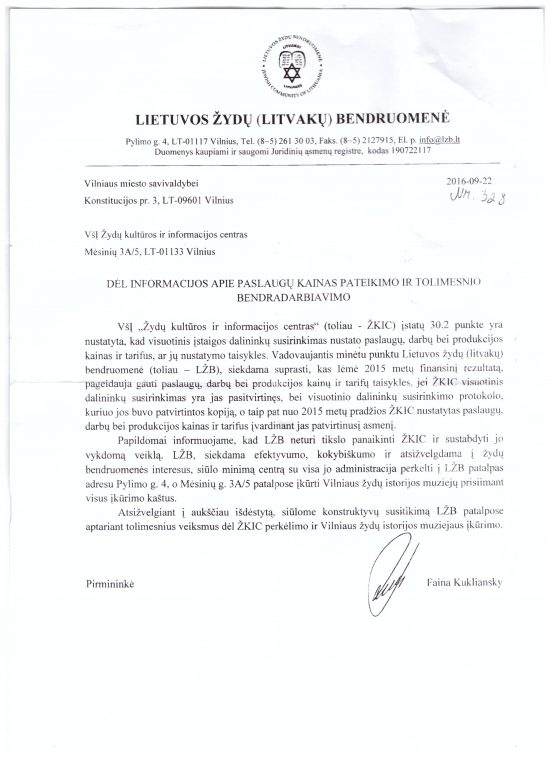