Posted on 2 October 2016 by Defending History

The following new Rules of the Synagogue document appeared in two long-standing dusty frames in the entrance hallway on approximately 29 September 2016, at the Vilnius Choral Synagogue on Pylimo Street 39 in Vilnius, Lithuania. The document, dated 22 September 2016, in Lithuanian alone, replaces a set of rules that were posted bilingually for many years, in Yiddish and Lithuanian. Some members of the congregation believe that these Rules were enacted only after a 27 September 2016 morning services incident, at which a rabbi resident in Vilnius for 22 years was asked by the gabbai (Yiddish gábe, the official synagogue administrator), at a time when the official rabbis were not present, to blow the traditional ram’s horn (shofar, Yiddish shóyfer, Litvak Yiddish shéyfer, Israeli shofár), in the run-up to the Jewish New Year.

As the rabbi blew the shofar, one of several Orthodox young men from Israel verbally attacked him and lunged, trying to physically tske the shofar from his hands. The rabbi was defended by the gabbai and other worshippers. Within hours, the gabbai was fired and replaced. Three elderly congregants reported to Defending History that they were told by s top community official that they had to decide: If they continued to be friendly with the rabbi resident in town 22 years, who is not one of the official community’s appointees, they would lose their financial and humanitarian support.

Starting on 30 September, there was a prominent presence of one or two armed guards dressed in uniforms very similar (to the untrained eye) to special security police. According to numerous reports they have been “throwing their weight around” not outside on the porch to guard from external threats, but in the hallway used for worshippers being able to enjoy some conversations with each other. Their placement near the entranceway to the sanctuary has been taken as a notice that they could be in place to remove, say, a rabbi who might say a word or two without the stringent permissions required by the new rules posted. All worshippers consulted agreed on the need for proper security to protect the synagogue from terrorist and other external threats; they felt that this issue is separate from concurrent and intermeshed apparent activity to disrespect, delegitimize, or undermine the independent rabbi of twenty-two years’ standing.

The new rules are signed by the titular head of the religious community who has not been seen in synagogue for many months and had long indicated to at least some congregants that he wished to be relieved of his duties and was being repeatedly used as a kind of hatchet man (his name was used on the official document firing the long-standing chief rabbi in August 2015, after that rabbi had opposed the convention center project on top of the old Vilna Jewish cemetery). These rapid changes follow years of peaceful, friendly and productive coexistence in the city’s one prewar still-functioning synagogue of a variety of traditional Orthodox traditions that has led over the past year to a near doubling in the number of worshippers on typical Sabbaths, and a show of graceful Vilna Jewish unity and tolerance, on the religious front at least, to the outside world.

[Update of 6 October: An online version comprising a digital version of the new rules (not compared with the framed hard-copy text below) has been posted on the official community’s website.] 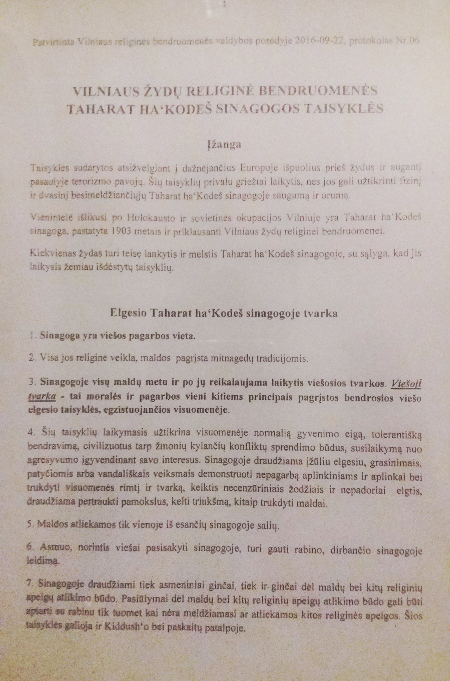