Posted on 23 January 2014 by Defending History


The following translation, by Geoff Vasil, is of a front page article in the Vilnius daily Respublika (18 January 2014), featuring an interview with Kaunas Jewish community leader Gercas Žakas (the words superimposed on the photo roughly translate: “Perhaps someone really is provoking us and sowing discord intentionally”). The Lithuanian original is available online. 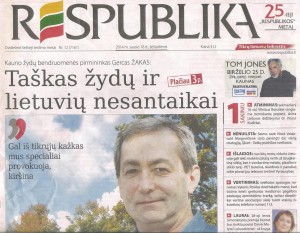 Kaunas Jewish Community chairman Gercas Žakas was initially surprised when the daily newspaper Respublika, where his son Arijus worked as a reporter, was deemed an antisemitic newspaper. And now Žakas is surprised our politicians sported a Wehrmacht symbol during Defenders of Freedom Day.

Žakas: “What symbol are you talking about?” Žakas asked. “I know nothing, I was away. Apparently someone wasn’t paying enough attention.”

Respublika: “During the commemoration of January 13 at parliament forget-me-not pins were passed out, which are really a symbol of the Nazi German Wehrmacht military.”

Žakas: “Where? In parliament? During the January 13th commemoration? So how do the politicians interpret this symbol? Why was this sort of decoration needed?”

Respublika: “People are saying the politicians didn’t know the forget-me-not is a symbol of the Wehrmacht.”

Žakas: “That seems strange to me. Politicians who make it into parliament ought to know. After all, they have a whole mess of aides and consultants receiving large salaries. If these aides and consultants don’t understand anything, let them go dig ditches. Politicians often do not understand very well what they are doing and saying. Bronius Bradauskas (chairman of the parliament’s Budget and Finance Committee—Respublika), for example, proposing Israel pay for pensions to Lithuanians who rescued Jews during the war. Bradauaskas forgot Jews were also Lithuanian citizens. A member of parliament, and he doesn’t understand. Or, perhaps, there really is someone who is intentionally provoking us and setting us one against another. Perhaps some youth group doesn’t understand that Jews who lived in Lithuania were citizens of this country, but that in parliament not everyone knows that, that’s difficult to understand.”

Respublika: “Is someone perhaps sowing discord intentionally? After all, our peoples before World War II got along well.”

Žakas: “Before the war Jews lived in Lithuania totally normally. Friendly with Lithuanians. Yes, there were all sorts. A child disappeared, they said the Jews kidnapped him for matzo. And then later the child reappeared. There were such isolated incidents, but here we have the entire parliament with the Wehrmacht symbol. It’s hard to comprehend. And concerning peoples [ethnicities], it is not acceptable to say anything bad at all. There are only separate bad individuals. In every nation there have been, are and will be degenerates. I have worked together with Lithuanians for so many years now. Just in the Lithuanian Football Association alone, to which I belong, there are 400 members. If I speak like a human being to everyone, everyone speaks to me like a human being. But for the politicians to say they didn’t know what a symbol means, that’s not enough. So what, then, are the parliament’s attorneys and consultants doing?

Respublika: “Would it be worthwhile for the prosecutor general to begin an investigation into who personally proposed the forget-me-not?”

Žakas: “Someone must investigate. It would be better if it weren’t investigated by Jews. The Lithuanian intelligentsia should figure it out. It would be more natural. There won’t be so much anger.”

Respublika: “Right. There would appear angry anonymous comments that those Jews are again making demands. Although I really doubt whether attorneys and the intelligentsia would want to catch the person who thought up that forget-me-not. Neither would they want to admit that the forget-me-not incident was an intentional psy-op. And it’s like when Respublika published one cartoon, and the demeanor of the intelligentsia and attorneys and journalists instantly grew dark…”

Žakas: “My son Arijus also worked at Respublika. They kept asking me why he worked at an anti-Semitic newspaper, and I said I hadn’t seen Respublika was antisemitic. Well, there was this cartoon printed. But we, Jews, sometimes react too sensitively. It looks like no big deal, but [they] take it a different way sometimes. Because those Jews who survived the Holocaust, all that horror, when they pull you out of a pit of corpses, they are more sensitive. I totally understand that kind of reaction, but sometimes it is a bit exaggerated. And [they] react to all sorts of anonymous internet comments.

Respublika: “But anonymous people enjoy making fun of all ethnicities, races and professions. They even leave angry comments under the weather forecast. If it’s about a singer, someone will inevitably write that she can’t sing. Or sings horribly. If it’s about a businessman, he will be called a thief and exploiter. If it’s a beautiful girl, that she’s a barracuda.”

Žakas: “There have been and will be these angry anonymous [commentators] among every nation. Sometimes they call us NKVD. But it wasn’t Jews who established the NKVD. It wasn’t a Jewish organization. There was the Soviet structure and people of different ethnicities worked in it. Including Lithuanians, Russians and other ethnicities. Jews constituted 17 percent of the total population of Lithuania. Therefore they constituted a similar percentage of those who worked in the NKVD structure. But I should think that today in Lithuania we, Jews and Lithuania, have no problems getting along. Neither does that Baltic sun [Žakas apparently means “Lithuanian folk swastikas” here—trans] bother me much. But it would be better if there were no swastikas. No matter what, it still brings to mind the SS.”

Respublika: “All nations make ethnic slurs to a certain extent. If it’s an Estonian, he must be slow. If a Russian, he must drink a lot. If a Lithuanian, he must be glad if his neighbor’s barn is on fire. If a Pole, he must be swollen with pride. And all peoples are sorrier than we are. Of course, they also call Lithuanians Jew-shooters.”

Žakas: “But who does? The same ones who are sowing discord and screaming: see, we are all Jew-shooters. Criminals incite this kind of hysteria in order to make themselves appear clean. Has even one Jewish organization called the Lithuanian people this? Even Zuroff (Simon Wiesenthal Center representative Efraim Zuroff—Respublika) I haven’t heard him saying this, that all Lithuanians are Jew-shooters. And the president of Israel when he visited Lithuania did not say this. The world is mixed up. There are more Lithuanians living in Israel now than there are Jews left in Lithuania. There are many mixed marriages. Families get along well. And that’s how we live here, in Lithuania. And we have no troubles.”