Posted on 10 October 2011 by Defending History

Medieval Lithuania was a colonial power in Europe stretching from the Baltic to the Black Sea. After the sixteenth-century union with Poland and the eighteenth-century partitions by other European powers that reduced Poland to nothing, Lithuania reemerged as a modern state in the aftermath of World War I based largely on the ethnic boundaries of the Lithuanian population. Then there was the contested region around the capital, Vilnius, the majority of whose population identified themselves as Poles (or Jews, or Belarusians, and others).

Competing claims between Poland and Lithuania over the Vilna/Wilno/Vilnius area eventually led to a total breakdown in diplomatic relations between the two countries despite mediation attempts at the League of Nations.

Much of the effort to reestablish a national identity after World War I was directed at defining how unlike Poles Lithuanians were. Harmless exercises in negative self-definition — deciding what one is not rather than what one is — began to take on more dangerous overtones in the Lithuanian press in the 1930s, with a lot of page space devoted to a social Darwinism-type “struggle for existence” Lithuanians must wage against their perceived main “competitors”: Poles and Jews. During Nazi rule in Lithuania, Lithuanian nationalist forces and their collaborators targeted both Poles and Jews for mass murder and in some instances worked to convince their Nazi overlords that Poles in Lithuania deserved to be placed on priority schedule for extermination.

Despite some interwar Lithuanian attempts to cozy up to Nazi Germany and then to leverage Nazi rule into a place of prominence for Lithuania in the Third Reich during World War II, Lithuania failed at the time to preserve its statehood, much less any grandiose territorial claims to Slavic lands.

This long history of loss — of territory, of statehood, and the basic foundations of human morality and civilization, when Lithuanians turned on their Jewish neighbors en masse, overwhelmingly (with no disrespect to the inspirational courage of a tiny minority that risked all to just hide a neighbor, the real Lithuanian heroes of the war), in a national orgy of murder — is probably one of the explanations behind a Lithuanian nationalist pastime: defining the “Lithuanian mentality”. This exercise is often of mixed parts inferiority complex and national arrogance, and sometimes includes a nod to how people of other countries view Lithuania, Lithuanians or some trivial detail of Lithuanian life. The latter ingredient is almost always anecdotal by necessity.

Thus it was rather surprising to see several headlines from Lithuanian media outlets over the last week trumpeting remarks about Lithuania made by Lithuanian Jewish community chairman Simon Alperovich. Not that Dr. Alperovich has ever shied away from making critical and controversial statements on matters that deserve it; once during a ceremony at the Lithuanian presidential palace to honor people who had rescued Jews during the Holocaust, Alperovich used his short speech to say how while the bold and the beautiful were busy congratulating themselves at a fancy ceremony, the writing on the wall next to the presidential palace proclaimed in large letters “Juden raus” and how shocking this should be in a European capital. Of course, no one paid him the slightest attention and the graffiti remained there for months.

This was something different, though. The first “article” I saw, on Delfi,lt on 6 October, completely failed to answer the basic questions that have to be answered in anything pretending to journalism. It said a discussion was held, but didn’t say where. It didn’t say who held the discussion. It didn’t list all the participants. What it focused on was just critical comments made by Dr. Alperovich and an MP and a psychologist. 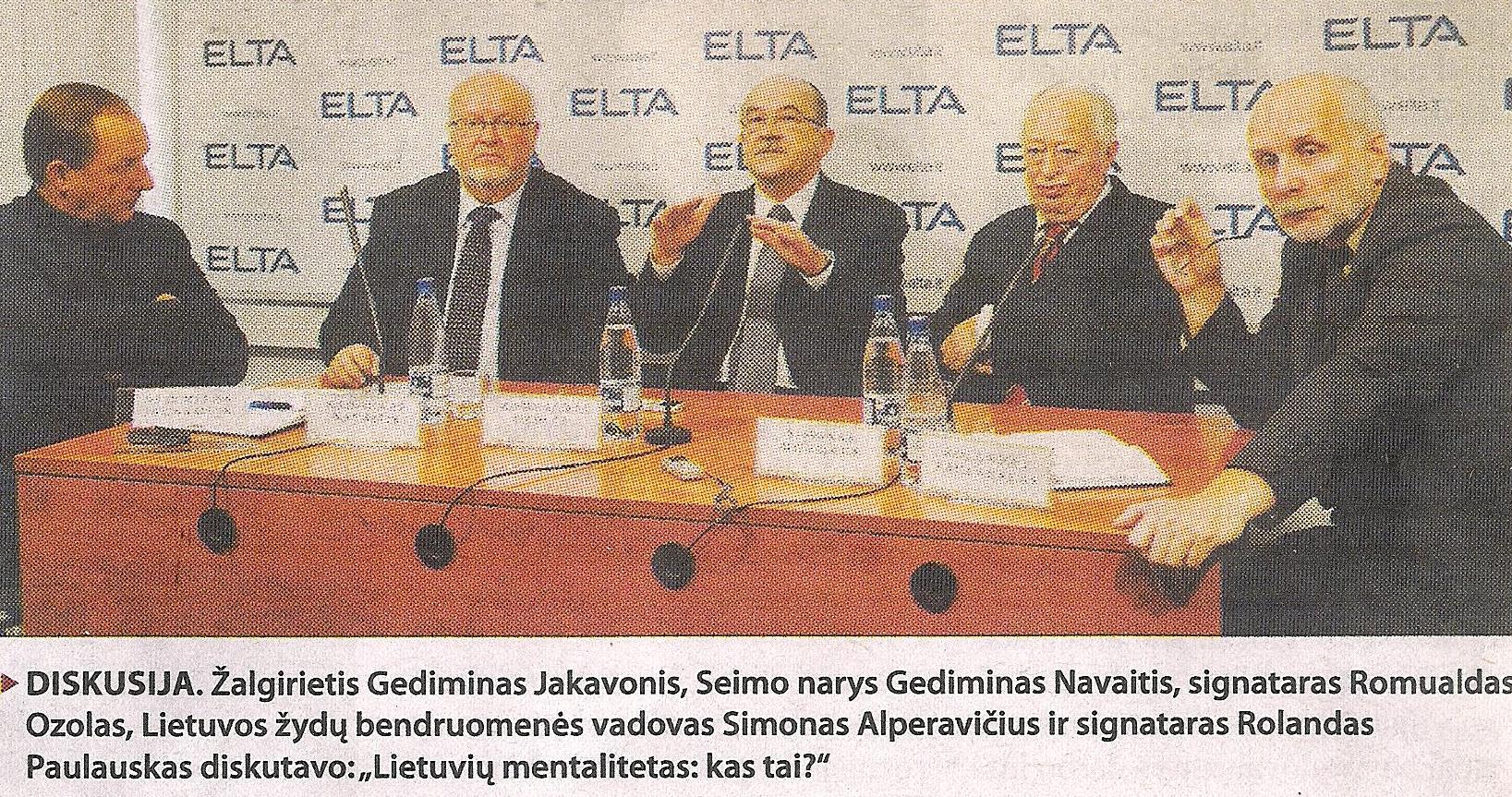 Dr. Shimon Alperovich, chairman of the Jewish Community of Lithuania (second from right) at the recent symposium. Photo from the print edition of Respublika, 7 October 2011.

The next report came on 7 October in a newspaper, the daily, Respublika, published by the publicly anti-Jewish and anti-gay Vytas Tomkus. Tomkus’s publication let on that the event was held as a press conference at ELTA, which is the pseudo-acronym for the Lithuanian Telegraphic Agency, once an important source of Lithuanian news. It was billed as a “roundtable” discussion held by an organization called the Žalgiris National Resistance Movement. Žalgiris? National resistance to whom? Žalgiris is the Lithuanianized placename Grunewald, literally Green Forest, where a multinational confederation defeated German crusaders in the Baltic lands in the late Middle Ages.

According to the photo caption in Respublika, discussion participant former MP Gediminas Jakavonis is a member of the Žalgiris National Resistance Movement. Respublika didn’t bother to mention that Jakavonis has also been an “analyst” for Respublika itself since 2009. The other members of the “roundtable” were Dr. Alperovich; MP and psychologist Gediminas Navaitis; former MP Romualdas Ozalas, the rabidly antisemitic former MP; and Rolandas Paulauskas. The formal name of the discussion was “The Lithuanian Mentality: What is It?” The discussion took place at ELTA on the evening of 6 October 2011.

While the Žalgiris National Resistance Movement doesn’t seem to have their own webpage, the neo-Nazi forum lndp.lt does have some information about the group, copy-pasted from an article in one of Tomkus’s publications. The link to the article provided on the neo-Nazi forum no longer works, but Vakaro Žinios apparently reported on 16 March 2009 a discussion held at ELTA by Žalgiris National Resistance Movement founders Rolandas Paulauskas, Kostas Smoriginas, Vitas Tomkus, and Arvydas Juozaitis on the fate of ethnic pride and patriotism in Lithuania. Arvydas Juozaitis is named as a philosopher although he is probably better known as a Lithuanian writer and former advisor to former Lithuanian prime minister Algirdas Brazauskas.

The discussion appears to consist of a number of justifications for the neo-Nazi march held on 11 March with legal permits (although Juozaitis doesn’t reportedly defend the neo-Nazis and talks philosophically about the notion of enemies and declining population). The Vakaro Žinios article then goes on to include comments by Lithuanian fascist youth leader Marius Kundrotas on why the Lithuanian “skinhead subculture” is being associated unfairly with fascism (see here, toward bottom of page). Apparently Marius Kundrotas doesn’t like being called a fascist, but has no problem campaigning for public office with a slogan against gays, blacks, communists and Roma.

Another mention of the Žalgiris National Resistance Movement comes on BNS editor-in-chief Arturas Račas’s blog entry for 5 May 2009, detailing a press release for another conference at ELTA on May 6 to discuss whether Lithuanian women should be allowed to change their surnames to gender-neutral forms.

The title of the article on the nexus Tomkus is providing for Lithuanian neo-Nazis and fascists to network with sympathetic politicians at these ELTA “roundtable” discussions recalls a real Nazi slogan from the Third Reich: “Only Language, Land and Ideas Can Save the Lithuanian People.” Replace language with Heimat, Land with Blut and Ideas with Führer and you’re ready to welcome in the New Year of 1933. “National Resistance” sounds a lot like “cultural survival” in the Nazi sense of the term, as well.

Here’s the lead paragraph in translation. It is printed in bold in the original:

“Different groups with very different mentalities have arisen inside the Lithuanian people, and there are almost no common significances left. This was discussed yesterday evening at a roundtable discussion of the ŽALGIRIS NATIONAL RESISTANCE MOVEMENT held at the ELTA news agency.”

According to the Respublika report, psychologist and MP Navaitis gets the floor first and says the Lithuanian people lack people with authority able to protect traditional values, and these figures have been lacking since the time of the Grand Duchy in the Middle Ages.

Next, the publicly antisemitic Romualdas Ozalas is introduced as a signatory to the Lithuanian legal act redeclaring national independence from the Soviet Union and as “philosopher”. Indeed, he launches into a philosophical consideration of what “mentality” means and ends up saying the Lithuanian Constitutional Court in striking down recent legislation aimed at defining the family as a heterosexual union with offspring was pandering to reality rather than principle (or “law”) and that reality is degraded (or “corrupt”).

Alperovich then says it is problematic to say anything in general about an ethnic group because every group, at the level of town or political party, has its own mentality, but goes on to name two characteristics: the lack of tolerance and the tendency to blame others for Lithuanians’ misfortunes. He is also reported to have said that while the Lithuanian people have fought and won independence, they haven’t learned fully to govern the state.

Ozolas then equates the Lithuanian ethnic group with their language.

Navaitis is then quoted as saying economic growth hasn’t been commensurate with the growth in happiness in the West.

The final bold paragraph promises to publish a full transcript of the “roundtable” discussion in Respublika the following week (i.e. this week).

Why would Alperovich enter the lions’ den of rabidly antisemitic and moon-bat Lithuanian pseudo-patriots when he knows the anti-Jewish Tomkus is behind the effort and that his words will be distorted and exploited to fuel ethnic tension in Lithuania? Probably because he’s never shied away from telling Lithuanians to their faces the whole truth about whatever it is he’s asked about. While the initial report headlined Alperovich’s seemingly somewhat “anti-Lithuanian comments”, the report that failed to include any temporal or geographical reference, Tomkus’s Respublika is likely hoping to milk the discussion for much more over the coming weeks as righteously indignant commentators add their two cents’ worth under every internet article concerning it.

On the other hand, the Lithuanian national sport of introspection might have become too trite and needed some fresh input, leading to the invitation to Alperovich. This could signal a more inclusive and positive approach to embracing Lithuanian Jews as fully Lithuanian and able to take part in what are normally closed ethnic discourses. But given the other participants and their past statements, I doubt it. Instead, it probably presages renewed antisemitic initiatives by Tomkus & Co. in the coming weeks.

This entry was posted in Geoff Vasil, News & Views, Opinion. Bookmark the permalink.
↑ Return to Top