Posted on 27 September 2011 by Defending History


Despite efforts by officials to suppress the photographs of the July 2011 desecration at the Ponár (Paneriai) mass murder site outside Vilnius, a cellphone image was released today to DefendingHistory.com by a former employee of the Tolerance Center who reported that he felt obliged by conscience to release the image. The Tolerance Center is the headquarters of the state Jewish museum which in addition to three addresses in Vilnius, runs the small museum at the Ponár site, where the desecration took place. This is the image of the paint attack on the main monument: 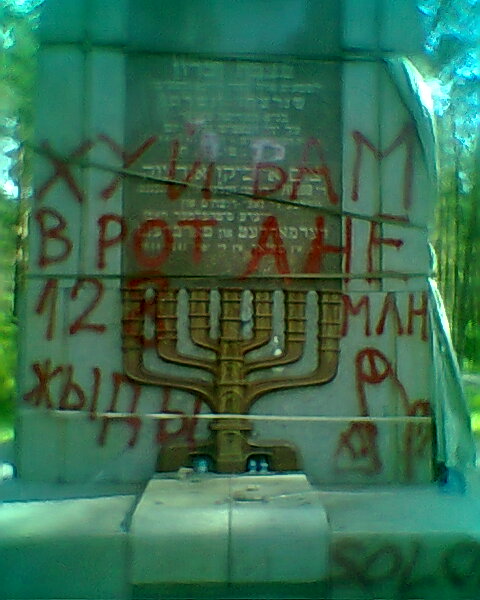 The red paint text in Russian roughly translates: ‘A prick in your mouth, damned Jews, and not the 128 million’.

The number is a reference to June’s Jewish communal property restitution bill, according to which this amount, in Lithuanian litas, a fraction of the buildings’ current worth, will be paid to a still unclear foundation in the ten years between 2013 and 2023. The lettering is followed in the lower right hand corner by a drawing of a penis.

Some one hundred thousand people were murdered at Ponár, including around seventy thousand Jews of Vilna and its region, between 1941 and 1944.

The former employee who provided the image, who is not Jewish, explained: ‘Only by revealing the whole truth about these things can our country hope to shame the culprits out of doing such things, to encourage our politicians to speak out loudly and clearly as soon as such things happen, and in general, to behave in the spirit of open society, so very important in a country with our closed Soviet past.’

The desecration, first reported in DefendingHistory.com on 12 July 2011, with the photos then available, was rapidly documented and put in contemporary context  by the Simon Wiesenthal Center’s Efraim Zuroff. It was subsequently the subject of an article by Yale historian Timothy Snyder on the New York Review of Books blog.

There has been no public condemnation by elected officials. There have been no arrests reported in the press (it is the public report of serious investigation, apprehension and application of justice that can serve as a deterrent). Municipal police did however hold an amicable meeting with leaders of the Jewish community shortly after the desecration.